One of the things I like to do whenever I wrap up a long weekend is to write about it.  Often times we do a trip and a lot of little things happen that we forget about.  While they generally form the overall experience of the trip, details of the trip fade and they wind up fading into faint impressions or even lost.

I do this mostly for myself and those that have a passing interest.  There won't be a lot of running stories here but this is mostly for very close friends, family and most importantly for myself.  I honestly do, from time to time, go back and re-live and re-read the experiences I had while taking a trip and they make me appreciate what I had a chance to live in.

Friday, September 9 was a travel day.  I had to drive from Salt Lake City (where I live) to Wells, Nevada.  Traffic, generally speaking, isn't terrible heading west.  Once you get past Tooele, there is about 75 miles of sheer nothingness in terms of civilization, so the drive west is easy.

To save money and not tempt myself in overeating -- much to my distress, I wound up eating at home before I left. I assembled all my stuff and after 6 pm I made the 2.5 hour journey west.

It was actually a nice drive and I enjoyed watching the sun set over the Wendover / Ruby Mountains.  By the time I made it to Wells, I was on Pacific Time and it was dark.

In the past, I had stayed at the Super 8 and this time, after going over the online reviews, I opted to try the Sharon Motel.  This is a local, non chain hotel and it got fair reviews.  The room was clean although the bed was as hard as a rock.  The TV also was something out of the late 80's.  Also the motel backed up to the local brothel... 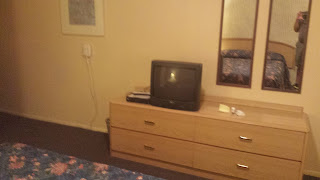 I actually slept pretty well and the motel was quiet and probably had the nicest owner ever.

I woke up early, ate, showered and took off for the race.  The race went really well and after catching a ride back into town, I was in search of a shower.

It was about 10 AM by the time I got back and I tried the public swimming pool, where the race was initially held.  However, they were locked up tight.  I drive about a mile back to the motel and the owner had already cleaned my room.  Bummed but not upset, I decided to snap a few pictures of the downtown area of Wells, which has clearly seen better days: 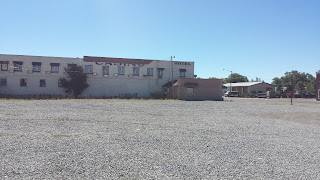 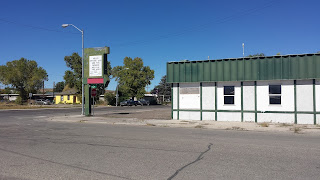 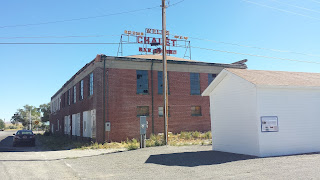 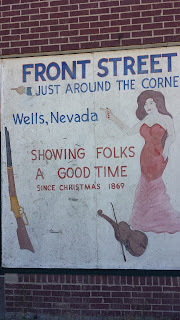 I was on the road by 10:45 and made the hour drive to Elko, which was my destination for the day.  I was pretty jazzed over my performance and I was also hungry.  I knew that the Red Lion Hotel had a decent buffet and I had a few coupons burning a hole in my pocket.  I wound up eating for $10 (plus tip) and got in a decent meal.  The food isn't as good or varied as much as Wendover's, but it was still yummy.

I felt it was too early to even try checking in and besides, I wanted to get in a hike. To make sure my food settled okay, I gambled some and won enough to pay for my meal.

I made the 30 minute drive to the top of Lamoille Canyon and did the Island Lake Hike.

By the time I was done with the hike, I was hungry and in desperate need of a shower.  So I headed back to the Red Lion and got my free room (it pays to play there).

I cleaned up and loafed around in the room for a bit before sauntering out to the casino.  I burned through my free play and if I recall correctly, I was neither up or down but managed to get some play in.

My stomach was growling and I wanted to try a restaurant and just see the sites a bit.  So I headed downtown in search of food.  I had wanted to try Elko's newest (to me) Italian restaurant, Tomatoes.  I had heard good things about it but a security guard I had talked to said that they had some "production" issues.

I walked in and it seemed that I got there during a lull in the crowd.  It was busy before and after I came in, but luckily I was able to get right in and order. 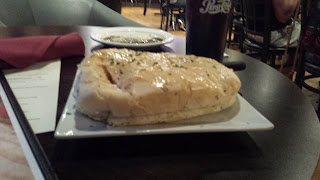 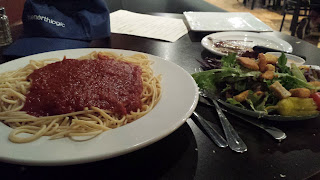 The bread was yummy as was the salad, but the spaghetti was so so.  It wasn't terribly creative and the sauce wasn't magic, in my opinion.  Epic proportions, but I definitely think that they can do more with their food to make it stand out.  Probably will not go back...

It was a busy night in the downtown area -- lots of young(ish) folks running around.  Apparently there was some sort of wine tour.  I decided to jump into the Stockman's Casino.  I hadn't been there in a while and it looks like it might be under new ownership.  They had some newer slot machines and it looked like it had a good clean-up.  I wound up gambling there and had an awesome run on a Super Red Phoenix and wound up leaving about $80 richer. 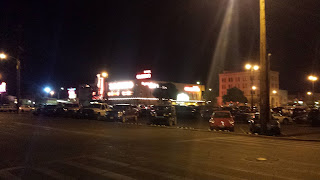 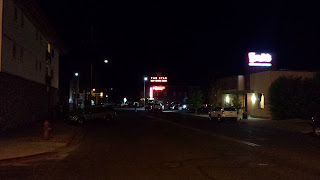 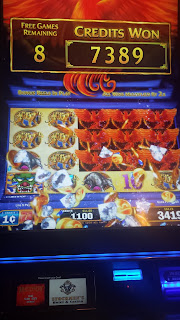 I had some free play to burn at the Gold Dust West casino so I drove down there and used my free play.  I had a lot of luck there (as usual) but it was all bad and I soon found myself down a bit.  I didn't stick around long and decided to make my way back to the Red Lion.

I wound up gambling to close to midnight and had a good run on a Zhen Chan, a Fu Dao Le slot machine that has similar payouts.  I never had had any luck with it in Wendover but my machine was smoking hot: 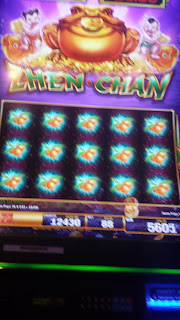 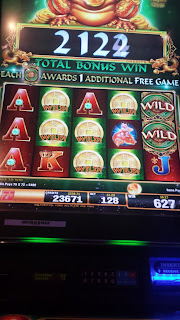 I wound up putting a fair amount of it back in but I walked away a winner and had enough to experiment with the other machines.  I also seem to have graduated to the next player level thanks to my streak as well -- so we'll see what Elko throws my way next.

I wound up turning in around midnight -- thoroughly exhausted.  I had a super hard time sleeping though -- I was way overstimulated.

In the morning, I packed up and went over to the Red Lion buffet again.  I was there too early (is that a sign up a problem?) and had to kill sometime in the casino.  I wound up profiting a bit, but I mostly wanted just to eat and hit the road.

By the time 9 AM rolled around, I inhaled a buffet (and again got to use a coupon) and took off to hike Winchell Lake, in Wells.

After hiking, I was once again sweaty and dusty.  I rolled into Wendover around 3 PM and they have a gimmick where you earn a tier point (i.e. you gamble a bit) you get to spin some video wheel to earn free play or tier points, or what not.  I haven't had much luck with it, always getting tier points.  I am too far away from making the next level to worry about it but there's always the hope I'll get some resort credit or what not.

I gambled a bit and of course I got tier points.... cry.

I gambled pretty aggressively at the Peppermill and got some hits but mostly misses.

I was exhausted and I had a free room offer from the Wendover people.  I didn't feel like driving another 100 minutes home and I had another change of clothes in my suitcase.  So I opted to redeem the free room and spend the night.

I cleaned up and used the shower before using the pool.  The amount of dirt that I washed off me was incredible.  It was one dusty trail I had done up in Wells.

I played around in the pool and decided I was pretty hungry.  I managed to get a 50% off buffet and ate like a king.  Wendover is still my favorite buffet (for the money -- followed by the Suncoast in Vegas)

I gambled some more at the Montego Bay and my luck went from lousy to utterly crappy.

I turned in fairly early and tried to sleep but despite my exhaustion I couldn't sleep very well, despite taking some OTC sleeping aids.

I woke up just shy of 5 AM and cleaned up and made my way out to my car.  The casino was a ghost town except for some hanger-ons and insomniacs.

It is quite an experience to drive in the desert in the early morning hours.  There are no street lights and it is like driving through a black vortex.  There are only a handful of cars the desert is just incredibly empty.  Luckily, nothing lives out there so you don't have to worry (much) about animals in the road way (not like you are going to have time to stop at 80 mph).

Work was difficult for a Monday.  Being sleep-deprived and physically exhausted made it a tough day, but I got through it.  After work, I took a picture of my car and here is what it looked like.  You can definitely tell I had a "good" weekend. 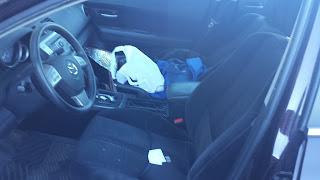 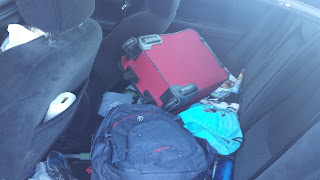