Race to the Angel Half Marathon Race Recap - Wells, NV 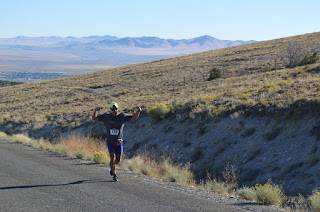 
In 2013, I discovered the Race to the Angel half marathon, located in a tiny town called Wells.  Wells is about 2.5 hours from Salt Lake City and there really isn't much there for the average person to do. There is Angel Lake. a brewery and of course the Ghost Town, Metropolis,  The casinos are pretty much at the truck stops so it isn't a hot spot for gambling.  So as far as vacation spots, Wells is probably not the place to be.

It just seems to be a place for families and people working in the mining industry with a brothel or two thrown in for good measure.  However, back in the 1800's Wells was a happening place with a lot of potential for development.  An earthquake and the boom and bust of the gold rush era makes it a ghost of its former self.

But one of the hidden gems of Wells is that it is a gateway to Angel Lake.  Sitting at nearly 8500, this lake is great for several hikes as well as fishing.

However, for roughly the past 30 years, the service road leading to the lake is turned into a half marathon course.  This course is tough... climbing about 2900 feet over 13 miles.  Not only do you have to contend with the climb -- you have thinner air as well as no shade.  Luckily the race is held in September, where the temperature is fairly reasonable.

While the course is challenging, it is by no means dull.  There are some stunning views of the Clover and Wells valleys and the sense of accomplishment upon arriving at the top is second to none.


I spent the night in a small motel about a half mile from the race's headquarters.  It was clean but the bed was hard and when I woke up and started packing my gear when I felt something go in my back. Definitely a tight muscle Ouch!  Suddenly, I was beginning to wonder if I was going to be able to make it.

I was going to go for it regardless and I jumped into my car and made the 3 minute drive to the starting line.  I had a few frantic moments when I tried to find the city swimming pools and didn't see it where I expected it to be (I think it is a fairly new building and google maps hasn't refreshed the city).  Luckily, Wells is so small that I was able to find it.

Since it was a small race, there was ample bathrooms and they had flush toilets.  If this had more people, I think it would've been a problem with only one stall.

Bib pick-up was super easy -- as this race was super small.  When I did it in 2013, it was small, but this time it was smaller, which is sad and unfortunate.

There were 6 aid stations on the course but I packed 32 ounces of Tailwind and brought a gel with me.  This isn't your typical half marathon and I wanted to be prepared.  I am glad I did.

The first mile or so is in town.  I made a jog through a residential area before crossing under the I-80 and doing a loop around the local golf course.  This is about the only flat section on the course.  I didn't go crazy here and just maintained an easy pace -- banking my energy for later.  Once I reached the service road, I knew the rest of the course and I knew the "fun" was just beginning.

It wasn't until just after mile 4 that I got my first water.  While the air temperature wasn't crazy warm, the sun was blazing and I was taking a few sips here and there.  My back was holding out despite an occasional reminder that it could be set off again.  The only thing I was really concerned about was the growing fatigue in my legs and the wear and tear on my Achilles tendons. 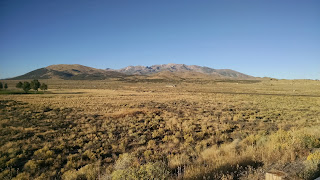 I was running solo for about 90% of the race.  At the start I was tagging along with what would be the first place woman but I was feeling pretty good and stepped on the gas.  I never saw her again until the finish.  The first  place male winner was a little dot on the horizon after about 2 miles so unless he crashed and burned there wasn't any chance of me catching him.  I didn't see anyone else every time I turned around to see if anyone was gaining on me.  Occasionally one of the cyclists from the triathlon would pass me and I almost always got a hearty greeting from them.

The hard part of the race starts about mile 6.  There is a good amount of incline and I knew to expect it.  I tried not to get worked up over my mile splits as I saw double-digit minutes per mile.  This course is definitely one you do for the competition, accomplishment and the views, not necessarily time.

After completing mile 6 you dip into a valley and you actually get to run downhill a bit.  I was able to pick up the pace but I was still holding back. 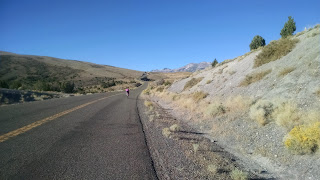 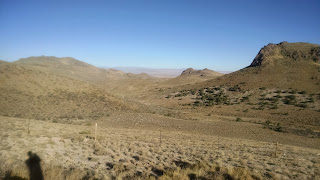 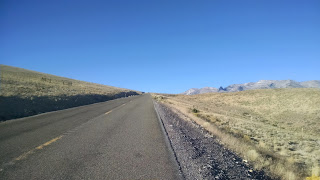 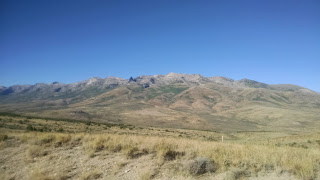 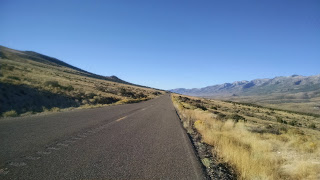 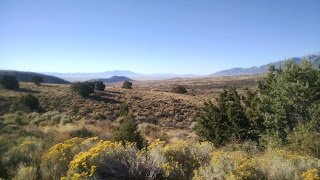 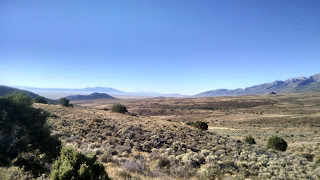 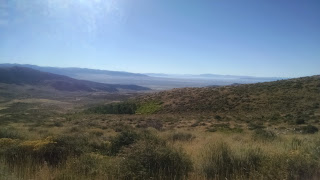 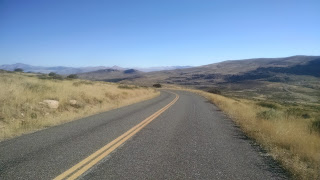 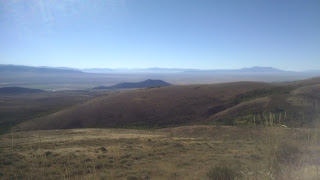 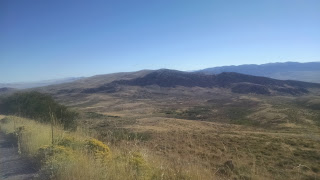 Around mile 9 the fun ends and you are basically climbing -- non stop until the finish.  The air is thinner as you approach the lake, which according to their signage sits at 8300 feet.  The road also is an S-curve and just when you think you are in the homestretch, you realize you got a bit more climbing to do. 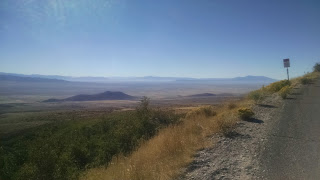 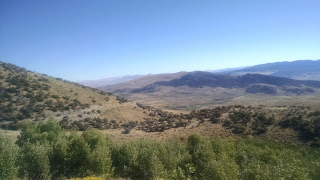 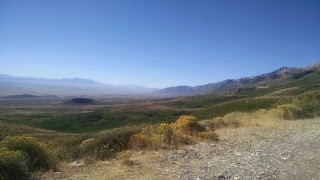 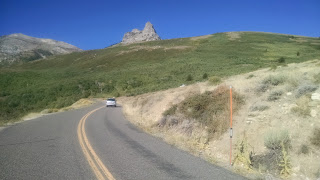 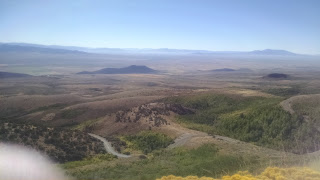 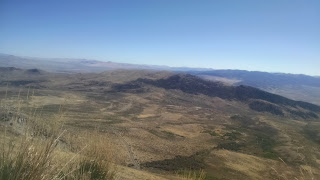 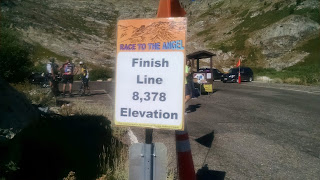 My pace was shot at this point and I kept looking frantically behind me in fear that someone was gaining on me, but all I could see was the occasional cyclist or car.

To "rest" a bit, I would stop periodically to snap a picture but I ran 99% of the race.  I seem to recall the previous year I had done it, we were relegated to one side of the road.  This time, there wasn't much of a course marking so you could cut corners (at your risk).  So I got to see some other vistas and views that I had missed last time.

I really wanted to knock out the last 1/4 mile or so, as it does level out.  But I was so windy and the less than optimal oxygen in the high altitude left me with nothing.  I sort of trudged over the finish line, glad to be done.


I didn't have much left at the finish line.  My legs were just tired.  I felt like I had run 18 miles, not 13.  That is what high altitude and hills will do to you.

Overall, I expected my time and actually was pretty happy to realize that I had beaten my 2013 time (the course was slightly different but the bulk of it was the same).

With the heat, I had gone through my entire 28 ounces of Tailwind.  I also had drank at each of the aid stations and used a Gu.  I was pretty dehydrated and their finish line post race stuff had water and sandwiches, granola bars, chips and fruit.  My stomach wasn't terribly happy so I just drank water and to be honest, I wasn't hungry.

I wound up chatting with the female triathlon winner and her family after the race.  They wound up being my ride back into town (if you read this -- I am indebted to you).  If you are a cyclist, you can pretty much coast back down but for a runner you had to bum a ride, have a family member drive you home (I was solo) or wait until the race director could find you a ride.  I really didn't want to get stuck at the top waiting for a ride (which could've been hours) and I am eternally grateful they were able to give me a ride back (otherwise I would've been tempted to just run down).

The t-shirt is a nice cotton / polyester blend.  The medal and age group award were also decent.  For $60 I got an "as to be expected race".  People were super friendly since it was a small race and I really liked the camaraderie that we shared in conquering "the hill" 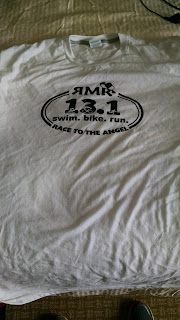 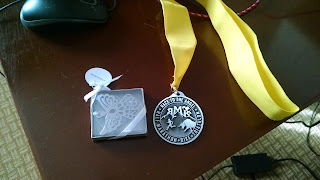 Hopefully this race will continue.  I got off on the challenge and it is an excuse to get out of town.  I mean, how many times can you tell people that you ran up a canyon rather than the usual down?
Posted by Eddie Gaul at 8:27 PM