This week was really difficult for me.  We are now suddenly in summer and it has gotten a LOT warmer.  The past few days have been in the mid 90's.

Having come from Chicago, I know what heat + humidity is like.  Utah's weather tends to be just hot and with a lot less humidity.  It still makes it difficult to run in though.

I normally run around 4:30 in the afternoon -- or the minute I get in the door from work.  But for the next 2 - 3 months I'll probably be running around 8pm.  This makes it really difficult for me to fall asleep afterwards and basically I have to kill around 3 - 4 hours after I get off from work.  It also means timing my meals so that I am not starving but not running with a full belly of food either.

I did do an early morning Friday run.  I got up at 4:15, through on some running clothes and headed out the door.  It was sort of weird being out that early and there weren't that many people on the trail.  Yes, there were a few other runners but it was a pretty lonely and kind of sketchy experience.  On the plus side, with the cooler weather I did run quite a bit faster. 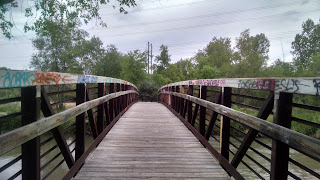 I toyed around with doing a race this weekend.  There is a major marathon in town (as well as half) and there was also a big downhill half.  I've run a few downhill races and while I can usually get a decent time, my knees wind up paying a price.

Also this week I really felt flat.  Part of it is the hills and part of it that I am paying a bit of a price for all the spring time racing I've done.

Next week I intend to change that.  I'll be heading west on Friday afternoon and looking to take down the Lamoille Canyon Half Marathon.  I had intended to do the full, but since the Ogden Marathon, I haven't really felt up to it.  Lamoille Canyon is one of the area's best secrets and it is a gem to hike.  The full starts at the very top and I would've loved to have come running down it.  My legs though probably would not have appreciated it.