The Utah Midnight Run is put on by On Hill Events and is a lightly attended race, drawing about a 100 people for the half marathon.  They also have a 5K and 10K that runs on the same bike trail but start at different times.  I think the night races appeal to the younger crowd and for me it is a nice way to get in a solid training run.

Either way the race is held on the Provo River bike trail.  It is very similar to the bike trail near my house.  It is reasonably flat with only a few "hills" where you dip under a road.  The challenge of the race, however, is that a lot of the bike trail isn't well lit.  And given the cloud cover over the moon last night, it made it difficult to see.  There were a couple of times where I hit an exposed crack or root nearly causing me to slip.  I did carry a head lamp with me which I used sporadically when it was difficult to see.  I highly recommend you carry some sort of light source for this race. 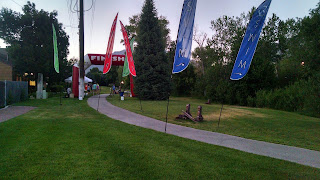 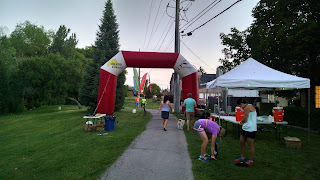 I arrived just before 9 PM for the 10 PM start.  This year there was hardly any traffic and I got there way early.  I got myself very close parking to the finish line and literally walked about 20 yards to get to the packet pickup.  I got my shirt and a glow-stick and wound up hanging around for an hour until the race start.

The race started exactly at 10 PM and I was off and running.  The bike trail isn't terribly wide so the first half mile or so, you sort of have to bide your time until people settle into their paces.

I didn't have a huge goal for this race and to be honest I was sort of worried.  I had been feeling pretty flat on account of the Lamoille Canyon Half Marathon that I had done just 6 days prior.  In fact, the amount of soreness I was feeling was comparable to having run a full a marathon.

I started off at an 8:30 pace and basically dogged the 1:50 pacer.  I kept him within my sites for the first half of the race, figuring if I could at least keep him in my sites, I'd finish in a decent time.

I wound up passing a good deal of people in the first half and by the time I hit the turn around, I could still see the pacer (running solo) and was within shouting distance of him.  I had been running into the wind, which mysteriously had showed up (probably off Utah Lake) and I was hoping that when I turned around that it would give me a second wind, of sorts.

It did, and for about 2 miles or so I was really able to push it with the help of the wind.  Unfortunately, I think the pacer decided he was perhaps off pace and dropped the hammer, leaving me running solo.  Also, I was starting to close on the 3rd place (overall) female who for a while I thought was the pacer and I was matching her pace, which was slower than 1:50.

Either way after crossing mile 10 I started running out of gas and was in survival mode.  My legs were just shot and I was slightly dehydrated.  I had brought my own drink and I was sipping on it periodically but the 80 degree temperatures had taken a toll on me.

The woman I was chasing seemed to be in the same state as I was but at least I had someone to follow and work off of.

Also around mile 10 is when I ran into the returning 10K (and eventually 5K) racers.  Some of them were still in the process of running their first 3 miles (they started at 11 PM).  It was good to make contact again with other runners after having run mile 6.5 - 10 largely by myself.  It was sort of surreal to be running in the dark and all of the sudden seeing a runner wearing a headlamp approaching...

I crossed the finish line in a somewhat disappointing 1:53:30.  I sort of expected this (and actually expected to run slower) but I was thrilled to get an age group win. 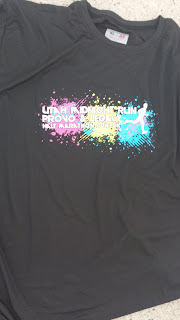 This year, the race was better marked.  Each year I would run it and I'd stumble across a fork in the bike trail.  Usually it was an easy decision: just follow the river.  They had put up a lot of blinkers on some of the deserted stretches to help guide you.  They also had the garbage cans illuminated -- I remember last year nearly colliding with one.  There were some areas that could've been better marked.  I saw the 3rd place overall girl nearly take a wrong turn by crossing a bridge she didn't need to.  Having run this one three times, now, I had a good sense of where to go and when.

I got a discount into the race -- so I paid a little over $50, which is fair for a half marathon.  They provided 4 water stops (1.5, 3, 4.5 and 5-ish -- plus the turn around) and they were prepared for the runners.  Post race food consisted of the usual fruit, cotton candy, Fat Boy ice cream sandwiches, and peanut butter sandwiches.  They also had plenty of water and Powerade.  The shirt is a nice tech shirt in a similar style to their previous ones.

Awards were a little crazy.  They had 3 races and it just seemed to take a long time to get through them.  I was jazzed to win my age group though.

The finisher's medal blinks and I think my age group one is supposed to as well, but either it is broken or the battery is out.  They are very nice medals and similar to what has been given out in previous years. 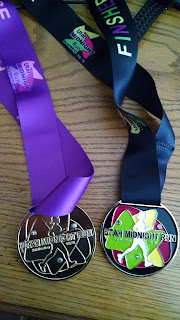 There is some room for improvement on the race.  From previous years the course was better marked, but there were some areas that could've used an arrow or something to indicate "don't turn here".  There were plenty of water stops and support was good.  The volunteers were enthusiastic and there was the occasional fan hanging out.

The course itself is nice.  It is hard to appreciate the beauty while running at night, but it was tranquil and there were some nice views of the city lights of Provo from the lake.  Also there were plenty of bridges that made life interesting.

The return trip back to the start -- particularly between miles 7 and 10 are lonely.  It was pitch dark and I could only see the distant bobbing light of another runner.

Running at night is also difficult to judge your pace.  You don't have instant feedback from your surroundings and you really have to use some of your focus on making sure you aren't going to run into something.

I do think the race is short.  In years past I've gotten measurements of 12.91 miles or so.  Granted, you are running under some bridges which might result in loss of signal and there were some tree and cloud cover.  Most other people reported less than 13.1 miles, however.