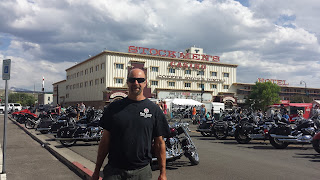 First off, this post really isn't about running but about the long weekend trip I took to partake in running the Lamoille Canyon Half Marathon.  I mostly do these types of posts for myself, as occasionally I like to take a trip down memory lane.

Either way, I did take a bunch of pictures of the events that transpired as well as eat at some new and interesting places.  So someone out there (besides me) may find this useful.

I took a half day off from work and left around 11 AM to make the roughly 3 hour trip from Salt Lake City to Elko, NV.  Normally, I wouldn't have taken a day off, but I had to be in Elko by 6 PM pacific time to get my bib.

Of course, I planned on stopping in Wendover on the way out.  I like their Friday morning buffet and I had earned enough points on my previous visits to acquire a free meal.  It has been a while since I was there for a Friday as I love their seafood ciappino soup.  We stopped at Montego Bay and I knew better than to gorge but I definitely ate enough to get my money's worth.

After eating, we decided to let the food settle for a bit and gamble.  They had 8x comps so we wound up playing a bit there.  My belief is that when they up the comps, they seem to make the machines tighter.  Whether there is any truth in that remains to be seen.  I did get some entertainment for my dollar and earned back some of the comps that we had used for breakfast.  I left a little lighter in the wallet so I suppose we paid for our breakfast after all.

The rest of the trip to Elko was pretty uneventful and by mid-afternoon we reached the place where the packet pickup was being held.  It was pretty much an easy-in, easy-out and I double checked exactly where I needed to be in the morning.

Before making the trip, I had discovered that this weekend's race corresponded with the Elko Motorcycle Jamboree.  This basically meant that all Harley Davidson, black leather wearing rider was going to be there.  They had blocked off most of the downtown area so I made the short walk from the outfitter's store to the downtown area.

I was pretty impressed with all the classic cars and biker swag for sale: 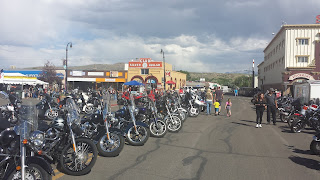 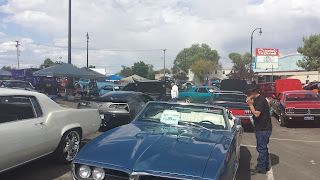 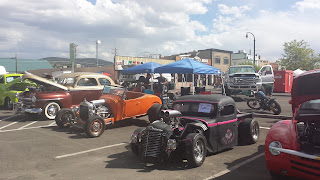 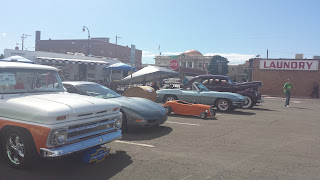 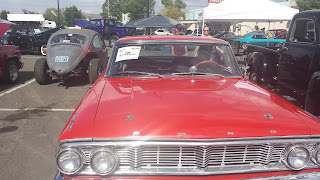 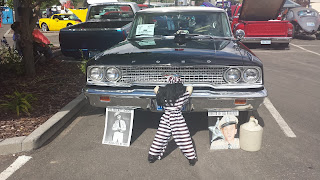 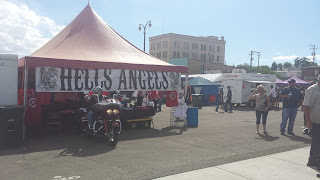 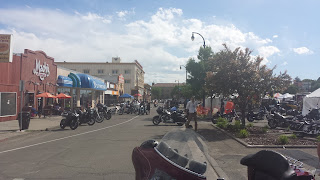 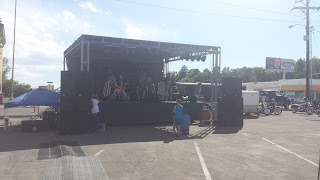 The crowd looked a little rough but generally speaking people were well-behaved and I didn't have any incidents with loud or obnoxious people all weekend.

It was pretty warm to be walking around so we got back into the car and made our way back to the Red Lion, which was the hotel I had booked for two nights.  Usually I get a room free for a night or two, but being that it was motorcycle weekend, they weren't honoring the free room vouchers unless you were a far higher roller than me.

The Red Lion is a nice hotel and I recommend staying there if you are ever in Elko.  For $200 I got a pretty decent room that was super sized.  It was close to the casino, which had me worried.  Normally you get the drunks coming in from the casino at 2 AM in the morning talking in the hallway but I was only disturbed once or twice.

We gambled a bit at the Red Lion and I actually made back some of my money.  I played a variety of machines and was actually getting a lot of entertainment and actually cashing with some minor wins.

For dinner we walked across the street and ate at Jr's Restaurant.  It is part of the Gold Country Casino, which is affiliated with the Red Lion.  I've never had a bad meal there.  They seemed to have new menus and I carb loaded with some spaghetti.  Very good and the cost was offset by some coupons I had. 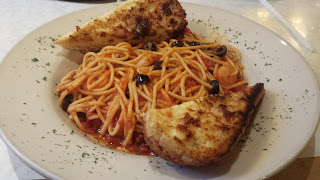 We wound up gambling a bit more but nothing terribly exciting happened.  By 8 PM we decided to call it a night and watch some TV.  I had to be up early the next morning.

I slept like crap -- as usual before the race.  I always have worries my alarm isn't going to go off or some unforeseen tragedy occurs.  Couple it with sleeping in a strange bed and feeling kind of warm, made it a difficult night.

In the morning I ran the Lamoille Canyon Half Marathon, which you can read about here. 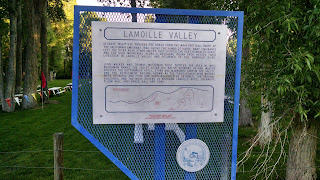 After the race, I wound up hanging around the park for a good 90 minutes making small talk with whomever I could strike up a conversation with.  It was just a beautiful morning and I enjoyed every minute of my experience doing the race.

After the race and loitering around, I made the roughly 30 minute drive back to town.  I cleaned up and decided to head on over to the Gold Dust West.  I was dying of thirst and they have self-serve sodas there, which I used to quench my thirst.  We also gambled there quite a bit, since they had given me a tiny bit of free play via the mail.

I wound up winning a minor jackpot on Fu Dao Le, which definitely put me over the top:

I wound up putting back some money but overall I left a winner, which is the first time ever at the Gold Dust.  Shari wound up hitting a minor jackpot too on some bonus wheel game: 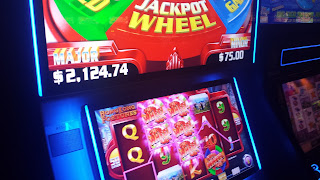 We wound up using a $5 off coupon for lunch.  I had a salmon + fries, which was good.  Service was a little slow and I wouldn't recommend their cafe to vegetarians.  It was pretty barren of any non-meat items.  Sure you could go with pancakes or a salad, but it needed some non-meat alternatives.  The food was good though... 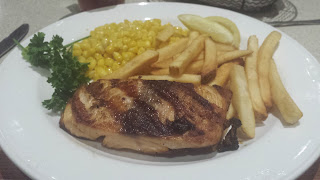 After eating we thought about going back downtown to check out the motorcycle show, but I was crashing pretty fast and so we decided to head back.  I tried to nap for a bit, but I was over caffeinated and over stimulated.

I think we gambled a bit and I wasn't doing terribly well.  So I decided to read by the pool.  Normally Elko can be pretty warm, but it was 75F at best so I only lasted a few minutes in the heavily-shaded pool.  It was refreshing but their pool is pretty small.  If it was warmer, I would've stayed in a lot longer.

After cleaning up, we headed back across town to Dos Amigos Restaurant.  I've been itching to try the place for a while since most people we talked to liked it.  They were prompt with service and the portion sizes were huge.  It was a team-service method so people were constantly assisting us.  I was never quite sure who our server was, but either way, my hunger was definitely satiated.  I also ran into a fellow runner at the restaurant who I met at the race.  It was good to see a somewhat familiar face. 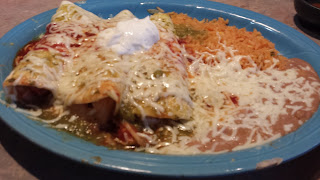 After eating we went back to the Red Lion in hopes that our names would be drawn for their random hot seat drawings (spoiler alert: it wasn't).  They had a Father's Day special of earning a small toolset if you earn 350 points.  I came up slightly short and I wasn't really willing to chase it for a $10 tool (you probably have to gamble a couple hundred to get that many points -- granted you win some, you lose some).  I wound up doing okay and by the end of the night my wallet was a little heavier with money but I certainly wasn't cleaning the place out.

In the morning, I stumbled out of bed and attempted a 5-mile-ish run.  I was extremely sore from the half marathon but the more I ran, the better I felt.  It was nice to take some pictures.  I even discovered the Elko bike trail and put in a short distance on that: 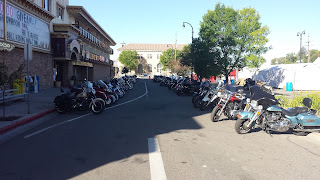 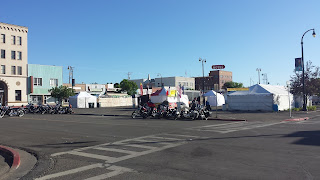 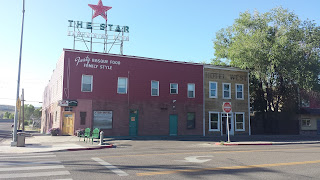 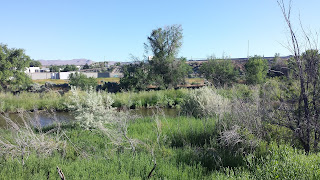 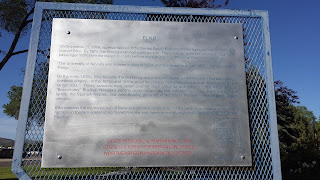 After cleaning up, we packed up and made our way eastward to Wendover.  We had a 2-for-1 buffet pass and they were offering 4x comps.  So with whatever money we had left, we'd use it there.  I am happy to report that when I left Elko I pretty much had the same amount of money in which I came -- minus tips and petty change.

Breakfast, as usual was awesome and I ran into a friend of mine who said the slots were hot.  I really didn't expect them to be hot, but just about everything I played, I made a small but tidy profit on.  I also got quite a bit of entertainment for my money.  Also, the longer I played, the more comps I made, so I have more freebies coming my way next time I go.

I did get a couple of hot hits on the bonus wheel game, including a 5x payout on a $10 win (just missing the 50 times).  I also got 50 free spins which netted me another $55.  Some machines I didn't do well on, and clearly were primed for me. 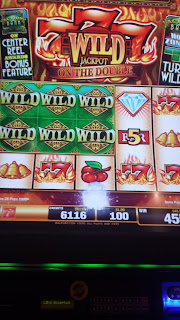 I actually came out ahead gambling-wise.  It wasn't a huge success, but anytime I get a lot of entertainment, free meals, and more money in my wallet, I am happy.  Shari didn't fare as well.  She tends to bet more aggressively than I do so her fortunes tend to swing wilder in either direction.

Hopefully I can make it back to Elko for their 4th of July celebration.  I did it last year and I had so much fun that I really want to do it again.  So hopefully something will work out.