An Interesting Night in the Emergency Room

I don't get sick very often, but when I do, I get really sick, to paraphrase the beer commercial.  Normally I get one minor cold a year, but every now and then something really sneaks up and kicks my butt.

The beginning of 2015 started out with a bang, when I was at work and just started to feel "off".  As the day wore on, I started to feel progressively worse.  My stomach seemed to be in knots and just "sour" feeling.  Also, I was starting to get that feverish feeling.  Just shy of 3pm, I let my boss know I was taking off and somehow managed to get myself home.

Upon arriving, I threw off my shoes, tossed them in a corner, and hustled as best as I could upstairs to the spare bedroom.  I dove under the covers and just started shivering.  I hadn't even bothered to get undressed.  I had beat Shari home, but when she did get home, she managed to get me all the trappings one needs to fight a flu: a thermometer, Tylenol and a Ginger Ale.

I hadn't drank much that day and I tried to get down some of the ale, but it was a major effort and I just wanted to be warm and not leave the comfort of the bed. My temperature was just hovering over 99, so nothing too serious. I turned on the TV and tried to sleep a but part of me wanted to stay awake.  It was too early to sleep and I didn't want to be up at midnight bug-eyed.

Around 6pm, I got up to the use the toilet.  I hadn't been going to the bathroom much, but I had acquiesced and decided I'd just go to sleep so best to take care of business. I retook my temperature and it had skyrocketed to 101.3, still not insanely bad, but I was clearly going in the wrong direction.

I waddled into the neighboring bathroom and barely went before I started to feel really off.  I tried to wash my hands, when the room started to fade out.  I yelled out to Shari that I needed help and according to her, I was yelling "I am dying, I am dying".

I made it about three quarters of the way back into the bedroom before blacking out and bending the crap out of my new glasses.  I laid sprawled half way in the bedroom and hall.

I came back to in about 5 - 10 minutes.  I was drenched in sweat, all the way through my tech running shirt and sweatshirt.  They were literally soaken wet.  I had no idea where I was or why I was laying on the floor.  Shari was on the phone with 911 people and they were sending out paramedics.

I've had an episode like this before.  Early in the 2000's I had a bad flu and I had gone to the bathroom, only to collapse on the bathroom floor.  I suspected this was the same deal.

I was really woozy and fairly incoherent.  As I lay there panting and trying to get my faculties about me, I realized I had to go to the bathroom extremely bad.  I did manage to hold it back.  Just as the paramedics were arriving, I summoned the energy to go to the bathroom.  It seemed like my stomach had opened up its contents but I felt a bit better.

By the time I got out the paramedics were there and I started to feel hazy again, despite just simply sitting on the edge of the bed.  I had to lay down for a while as I started to feel like I was blacking out.  They did the usual tests: heart, glucose (normal), temperature (back down to 99), etc Shari and her mom were insistent I go to the ER as were the paramedics.  I didn't really think I needed to go, but I was clearly outnumbered.  And the last thing I wanted to live with was if things got worse and I hadn't gone to the hospital, I would've NEVER heard the end of it.

I live really close to the hospital -- about 5 minutes away and I vaguely remember the ambulance ride there.  I do remember joking with the paramedics that I was an Emergency Fan and when they started an IV I mentioned that it should be TKO.  They had a good laugh over that one as I had gotten it right.

The paramedics were pretty secretive about my heart condition as I was worried that wow, I might have a heart defect and I'd never be able to run again.  However, I think they were concerned with my blood pressure.  I am usually about 110 / 70 but I was 95 / 55, which is fairly low.  I think I got as high as 112 over 72.  Shari kept telling them that I was a marathon runner and it was impossible for me to have a heart condition (being a runner doesn't guarantee you anything).

They did have to shave my chest a bit to get some electrodes on me.  For those that know me personally, I am on par with Chewbacca as far as body hair goes.  In fact, the worst part about the whole experience was pulling the darn things off.

I don't really remember being gurneyed into my room but they gave me some anti-nausea medicine, did more heart tests and the usual battery of stroke tests.  I took a urine culture as well but that turned up negative.  Also they wired me up with not one, but two IVs.

One of the worst fears as I had, as I sat there watching the Oregon / Ohio State game was my upcoming marathon plans and whether I'd even be able to run again (if I had a heart defect)  Luckily, no issues there. 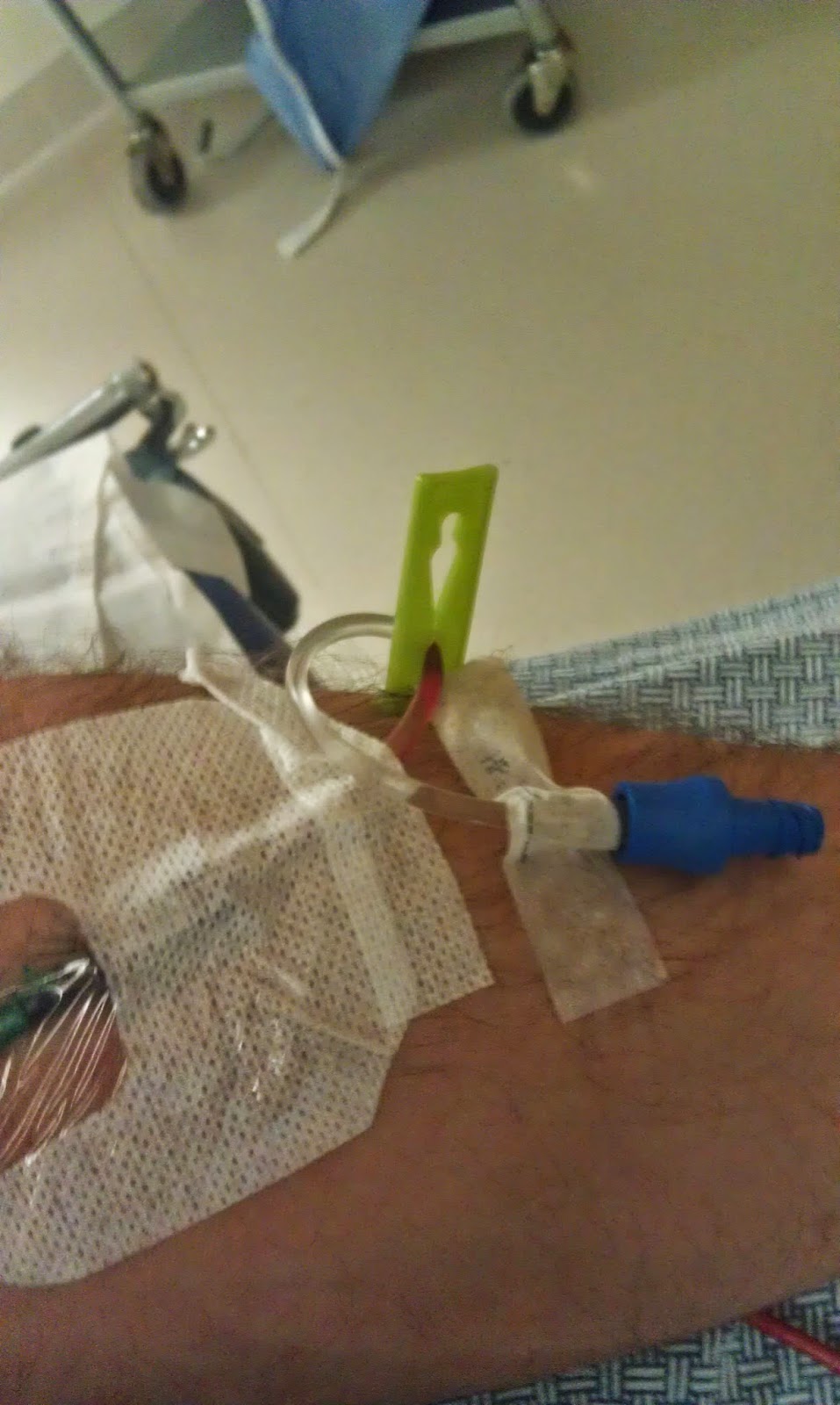 From start to finish I was at the hospital for about 3 - 4 hours.  I am fortunate that Utah / Salt Lake has a very good medical system.  The university is a medical school and they supply the area with a good group of doctors (I couldn't believe how young my doctor was).  I think I just needed to be stabilized and given fluids. I left the hospital just shy of 11 under my own power.

I slept pretty well last night at home other than having a serious case of Montezuma's Revenge, I am feeling pretty good.  I am just trying to keep up with my fluids and take it easy.

There is a weird stomach flu going around and with all the running I had done the previous week, it is probable that I might've weakened my immune system.  Also, I could've picked up a germ this week from all the dirty air.

I'll be fine though and I am already on the mend and hope to get back to running / training soon.  I don't think I have a temperature today, but I need to be close to a bathroom at all times. I am told this virus could last a week or two -- which I hope it doesn't.  Either way, time to take it easy.
Posted by Eddie Gaul at 11:27 AM