Ever since college, I've been a runner.  Well not exactly consecutively.  In high school / early college I was a smoker.  Not a hard core one, but maybe 5 - 8 cigarettes a day.  Certainly, enough to be addicted to them and enough to making quitting tough.

I finally got sick and tired of getting colds and sinus infections.  I was also constantly ridiculed for being out of shape.  I remember playing outdoor games and running 50 yards and being winded and sucking wind.  I had quit many times, only to pick it up again when life got tough.

I finally kicked the habit mostly for good in my later years of college.  I started running to get myself in shape.  I also did a life overhaul and fixed up my diet -- going from Oreo's and Cokes to stuff you'd find only at Whole Foods.  I started to lift weights and soon was running 3 - 8 miles in a shot.

I didn't know jack about running and I was on the hook for my own shoes.  Being a poor college student I probably put a 1000 miles on a pair before getting injured.  I got a bad case of runner's knee and even after a month of rest, if I went out for a run I'd get debilitating knee pain.  I remember looking at the Nike's and seeing how worn and lopsided they were and I couldn't believe I had run in them for as long as I had.  One thing I've learned about running: keep your shoes fresh!

I do like the fit of Nike's but anytime I wear them I get knee pain.  I am a New Balance guy or a Brooks guy these days.

I took a several year hiatus from running and picked up smoking again.  Again, I'd smoke for a few months and then get sick again. I'd quit for a while and then another life event would happen and I'd buddy up to the Marlboro man.  It wasn't until 1997 that I finally put the smokes down for good.

I had been dabbling with the smokes again then and life was getting complicated: I was getting married and coming on board with 2 step-children, I was buying a house and I had just started a new job.  Talk about a bunch of big life events coming together all at once.

So one night while sitting in my Palatine Illinois apartment, I decided to go out for a run.  Maybe my knee was better.  That one night I did about 2 miles without any problems.  No knee pain, and best of all, I felt fantastic.

That started the addiction....

From 1997 - 2004 I ran recreationally.  Every few days I'd log a few miles.  Sometimes, when the mood struck me, I ran long.  I remember running 18 miles once (from McHenry Illinois to Woodstock via Bull Valley Road).  I never raced, although I fantasized about running a marathon... but I didn't know much about it.

In 2004 a chance conversation in the locker room with a friend of mine led me to my first race.  He wanted me to run the Lake In The Hills "Run Thru the Hills Race"  I wasn't terribly interested but I humored him and said, "sure I'll do it" figuring to blow him off.  A few days later he handed me a race entry and said "see ya there"  Ugh, I had to do something social....

I figured since I ran a lot that I could easily "win" a 10K.  Nobody ran as much as me (famous last words).

As the name of the race indicates that race is a hilly race.  I wound up running it in about 49-51 minutes.  I had no idea about pacing and I dragged my sorry butt to the finish line -- completely gassed.  It was amazing to see all the different types of runners.  There were 100s of other runners there and I got a t-shirt, a pancake breakfast.  I was bummed I didn't win anything, but I suddenly realized there was more to running than just going out and jogging X miles.  Needless to say my interest was piqued.

My next race was another 5K in Crystal Lake that I decided to do on a whim.  I am pretty sure it was the Crystal Lake Health Bridge 5K.  I wound up running it in the low 22's.  What made this race memorable was that I placed in my age group and won something.  There's nothing like standing in a crowd after a race wondering if you won anything and to hear your name as winning in your age division.  Now I was really hooked.

Throughout 2004 and on I have raced.  Up until about 2008 I was racing way more than I should and often placing in my age division, winning some sort of swag.  It wasn't unusual for me to be doing a 5K or 10K  nearly every weekend.  I've literally raced in hundreds of races.  You can see many of them on my Athlinks page.  I want to say that Athlinks has recorded about 85% of my races, so there are many out there unaccounted for.

In 2009 when I turned 40, though, the age group wins started to dry up.  For some reason, in Illinois, the 40 year old age division is one of the toughest.  At this point, I did switch over to running distance events -- I became a half marathon junkie just as that race type exploded.  I also started running 1 - 2 marathons a year...  I still thoroughly enjoy the half marathon, as it is still an accomplishment yet far less demanding physically.

I think I hit my peak in 2007 and after that point, my times took a turn for the worse.  It sucks to get older and while I never amounted to a huge threat to winning races, I always made a good showing for myself.  I've come in second overall in a few races, but never first.

I do think my best times are behind me, but you never know.  I put in WAY more miles than I did when I first started (probably twice as much) and I now have some structure to my training, but you really can't outrun Father Time.

Roughly speaking here are my PRs:


I still jump into races, but these days I don't race nearly as much as I used to.  If the race is fairly cheap, fits into my training regime, and close by, I'll do it on a whim.  I am not a big fan of "entertainment" races.  Color runs, Electric Runs and Undie Runs are great introductions to people new to running, but for me, I prefer a solid road race.  I do like to go to destination races though.  And if there is a race in Nevada, I am game.

To commemorate 10 years of racing and nearly two decades of running, I've taken pictures of all the swag I've won.  Each one has a story and a memory associated with it.  Even some of the medals from 2004 I can clearly remember the course, the people there and roughly what time I got.  Some are age group awards and some are simply finishers medals.  But I still treasure each one of them.  Hopefully someone remembers to bury me with them when my days are over.... 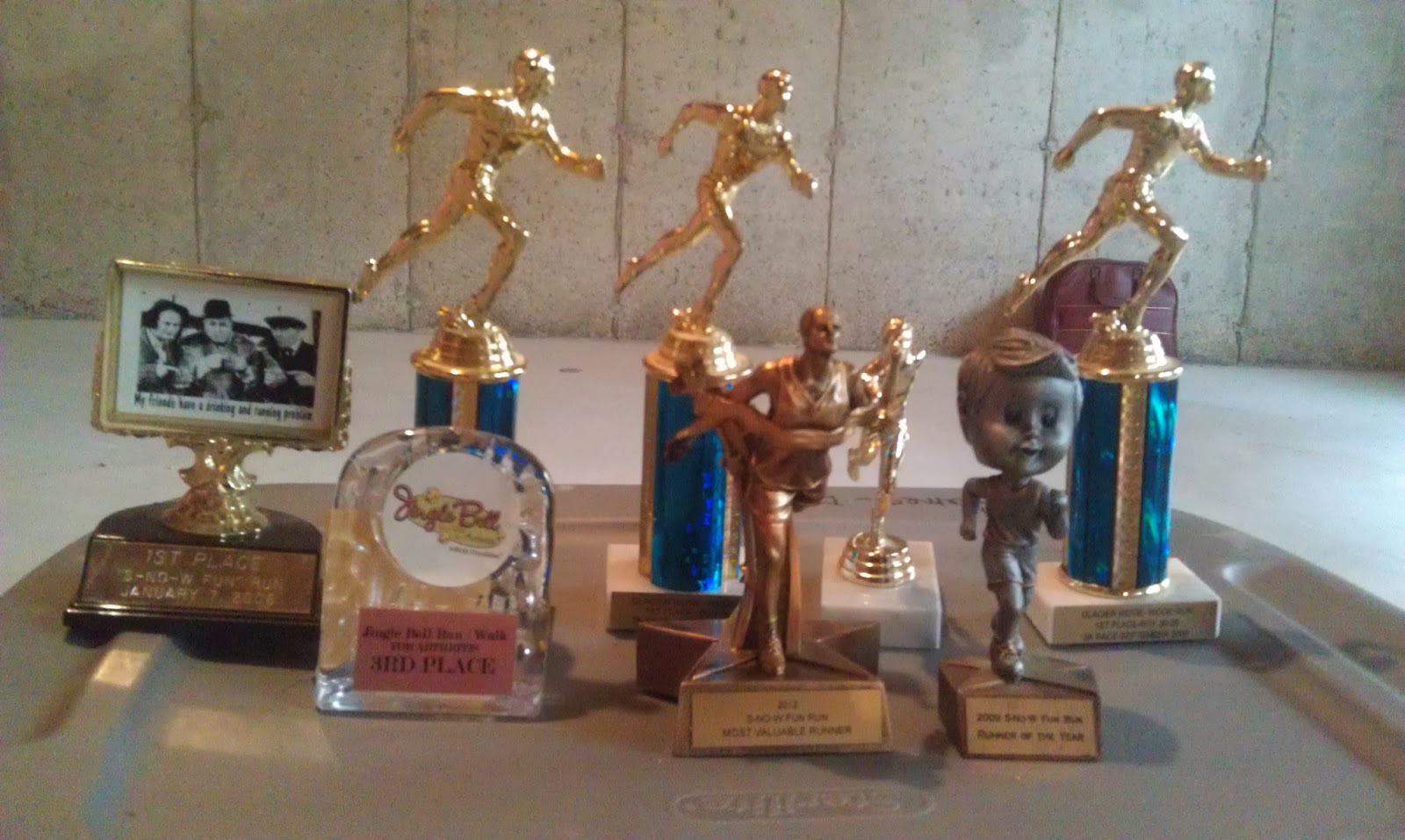 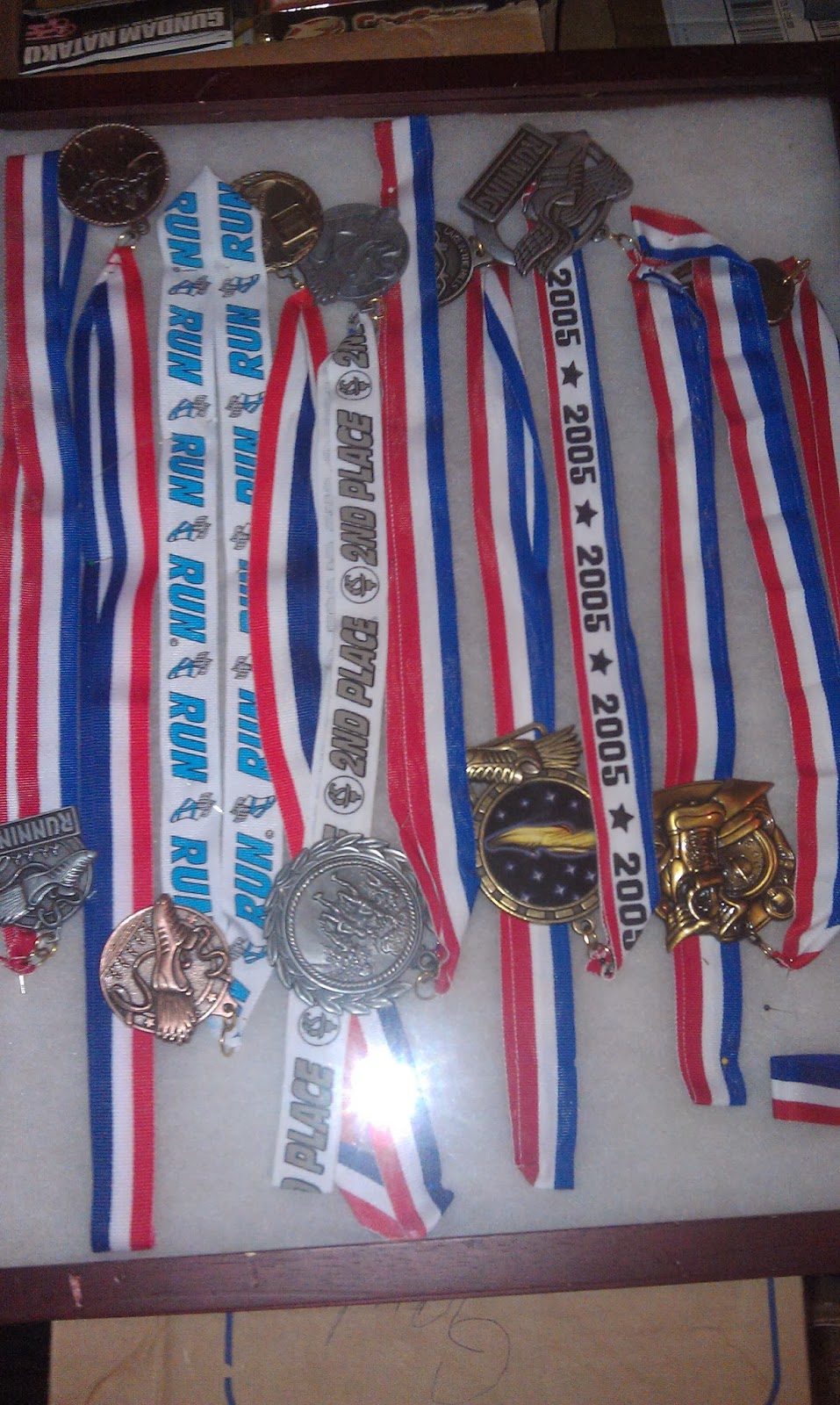 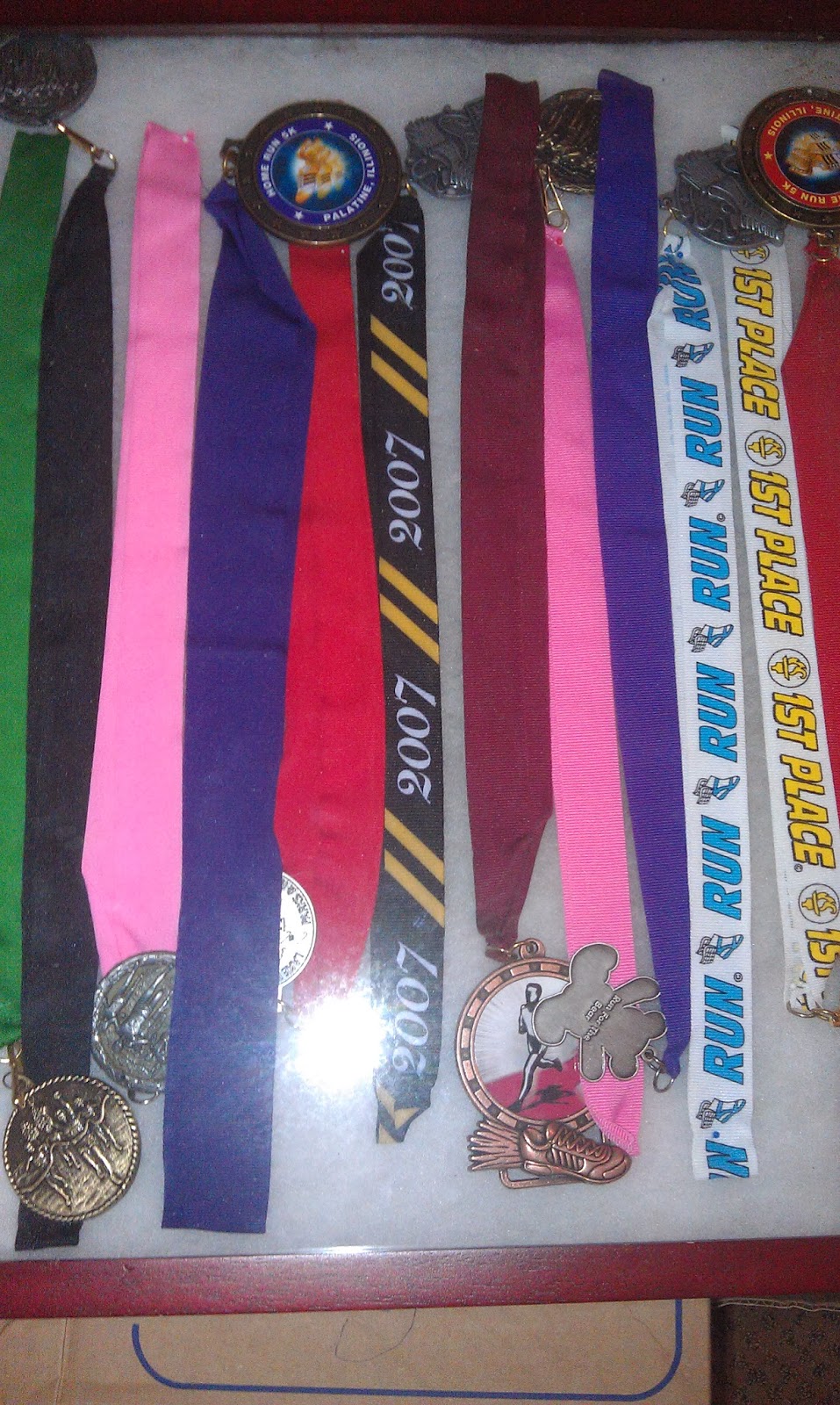 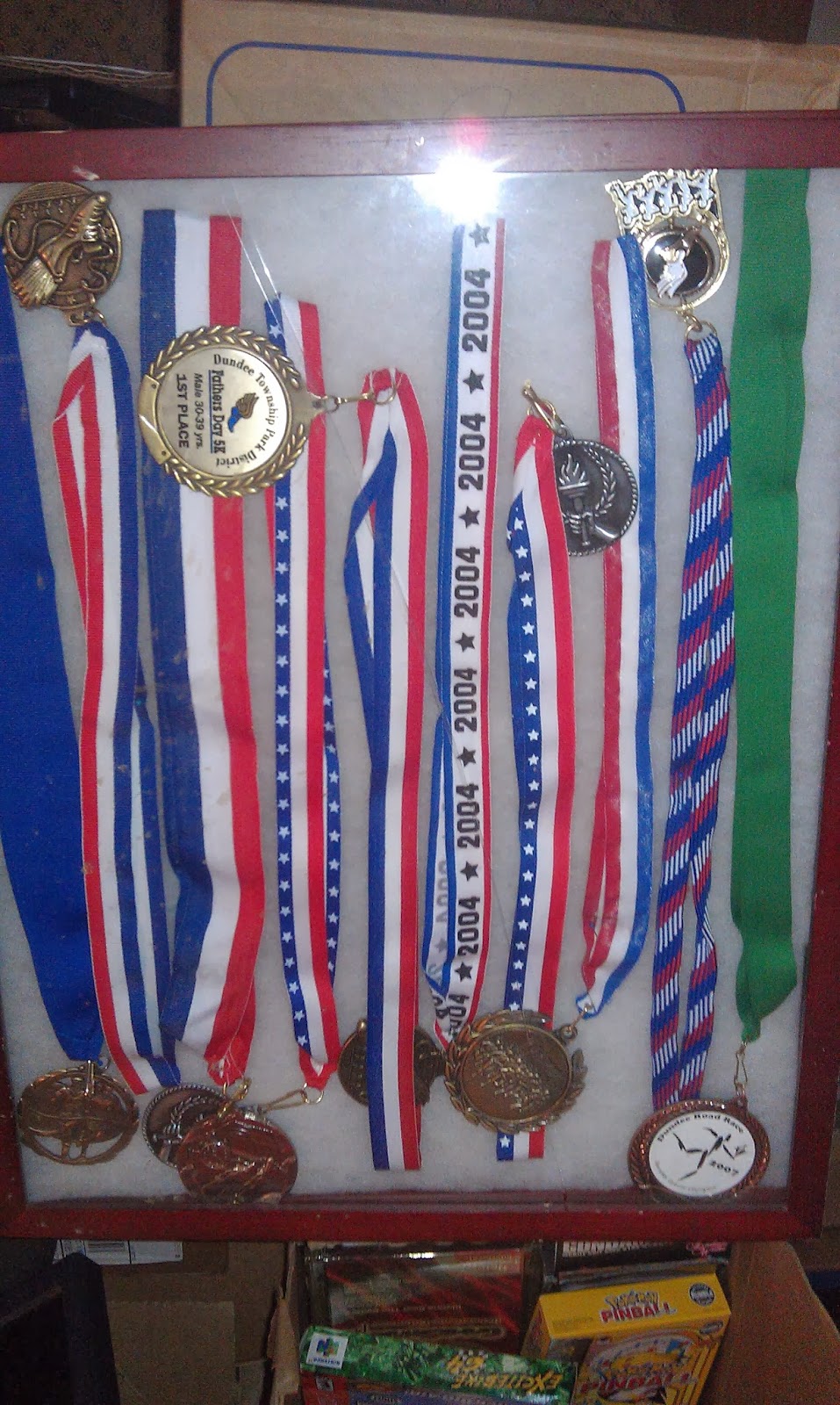 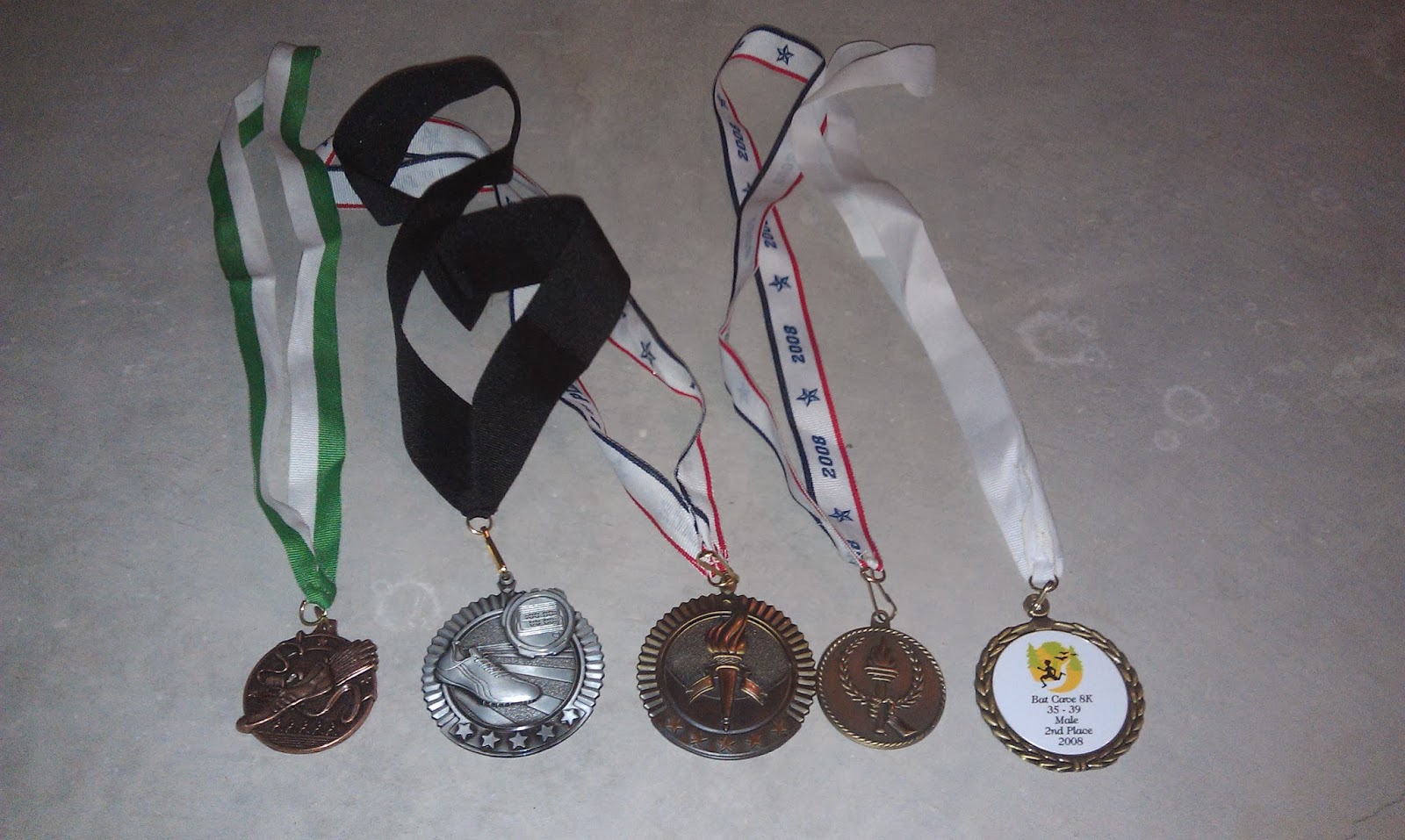 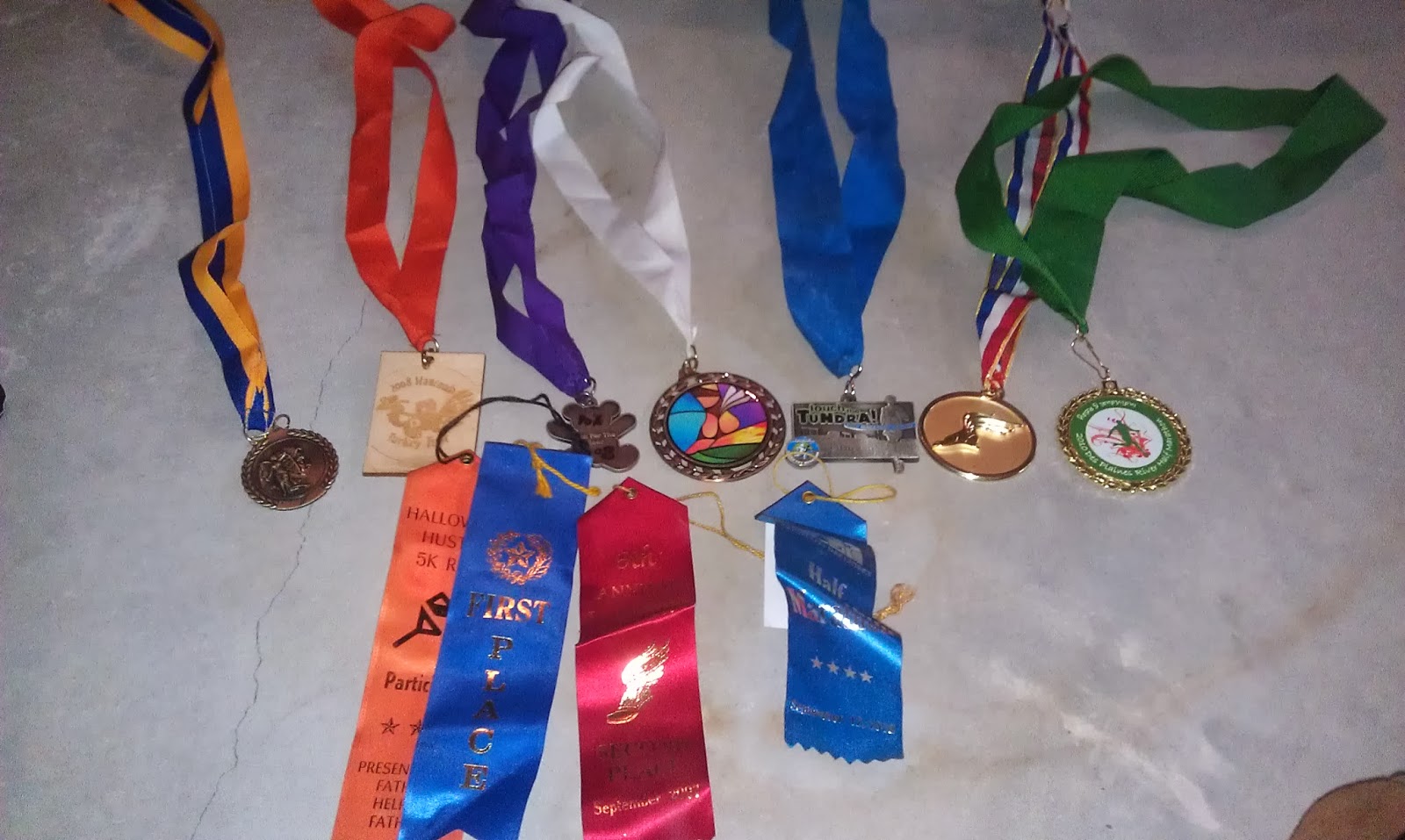 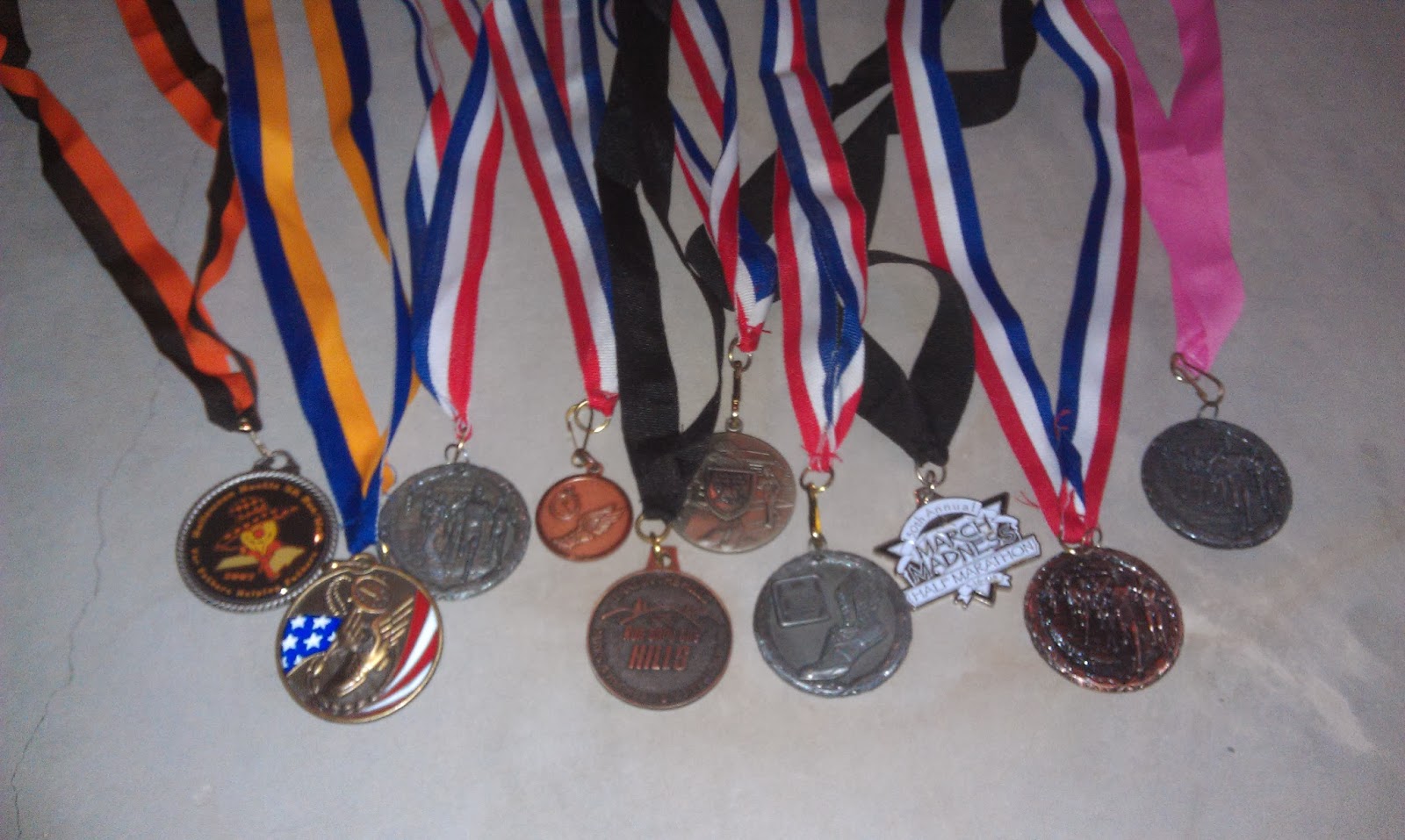 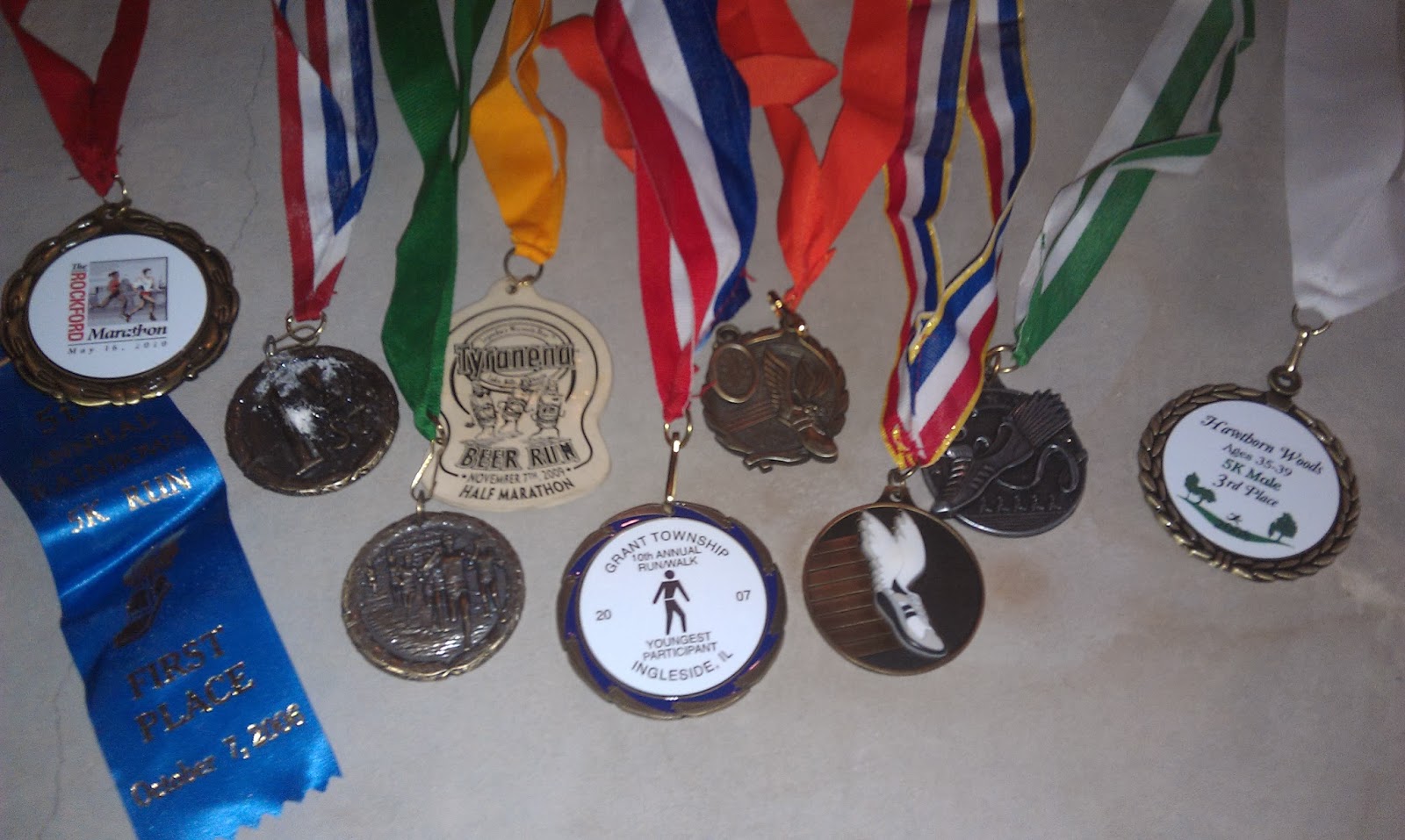 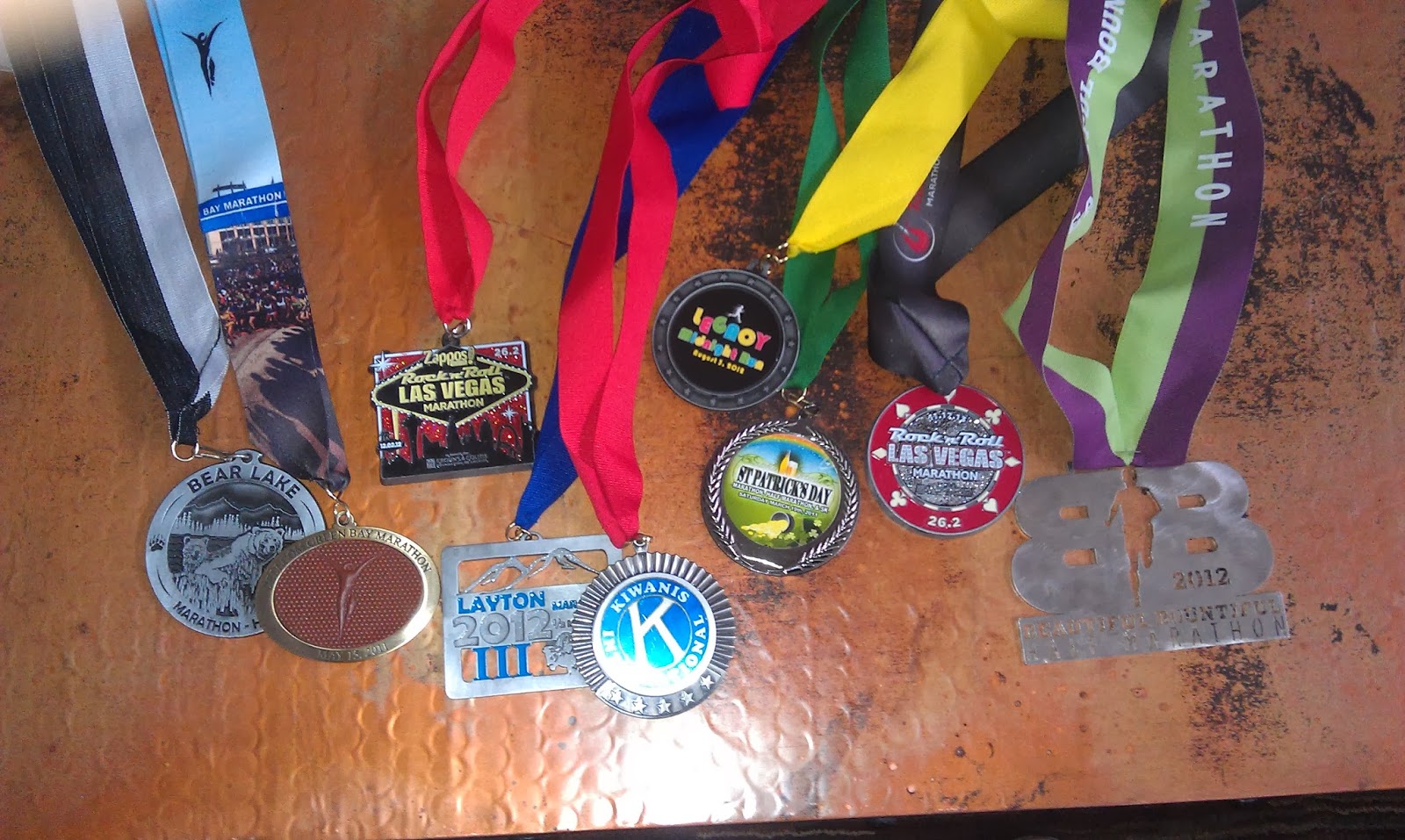 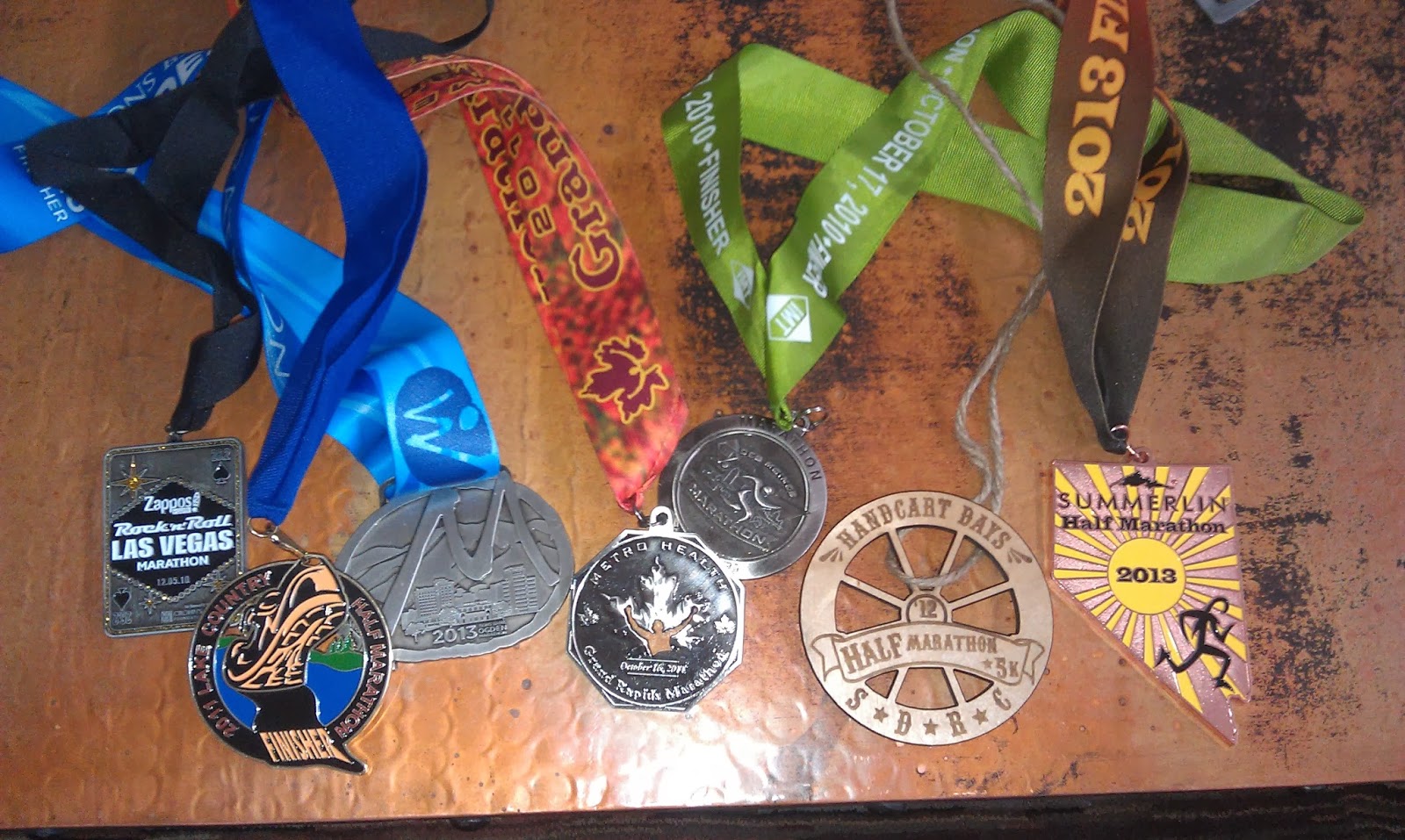 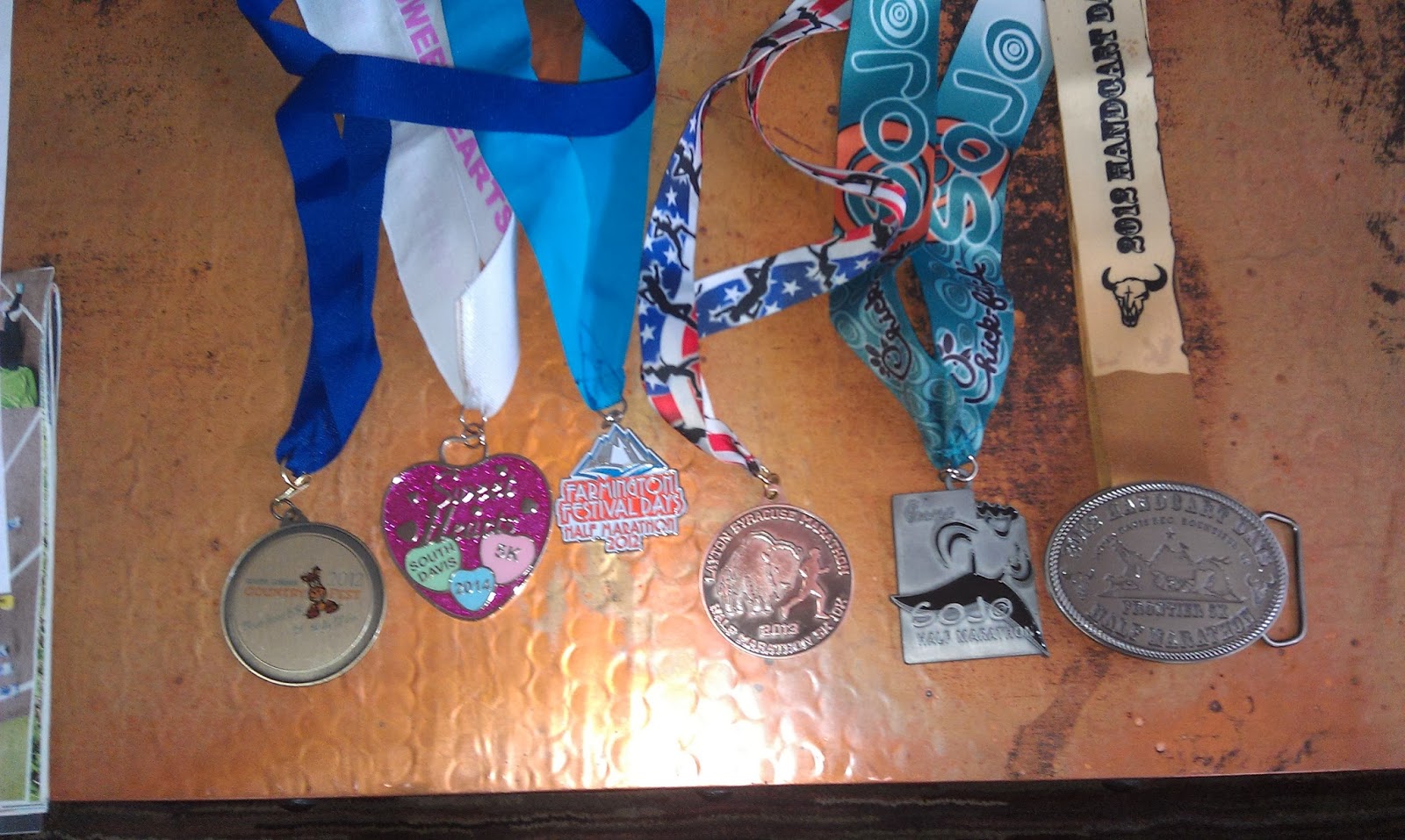 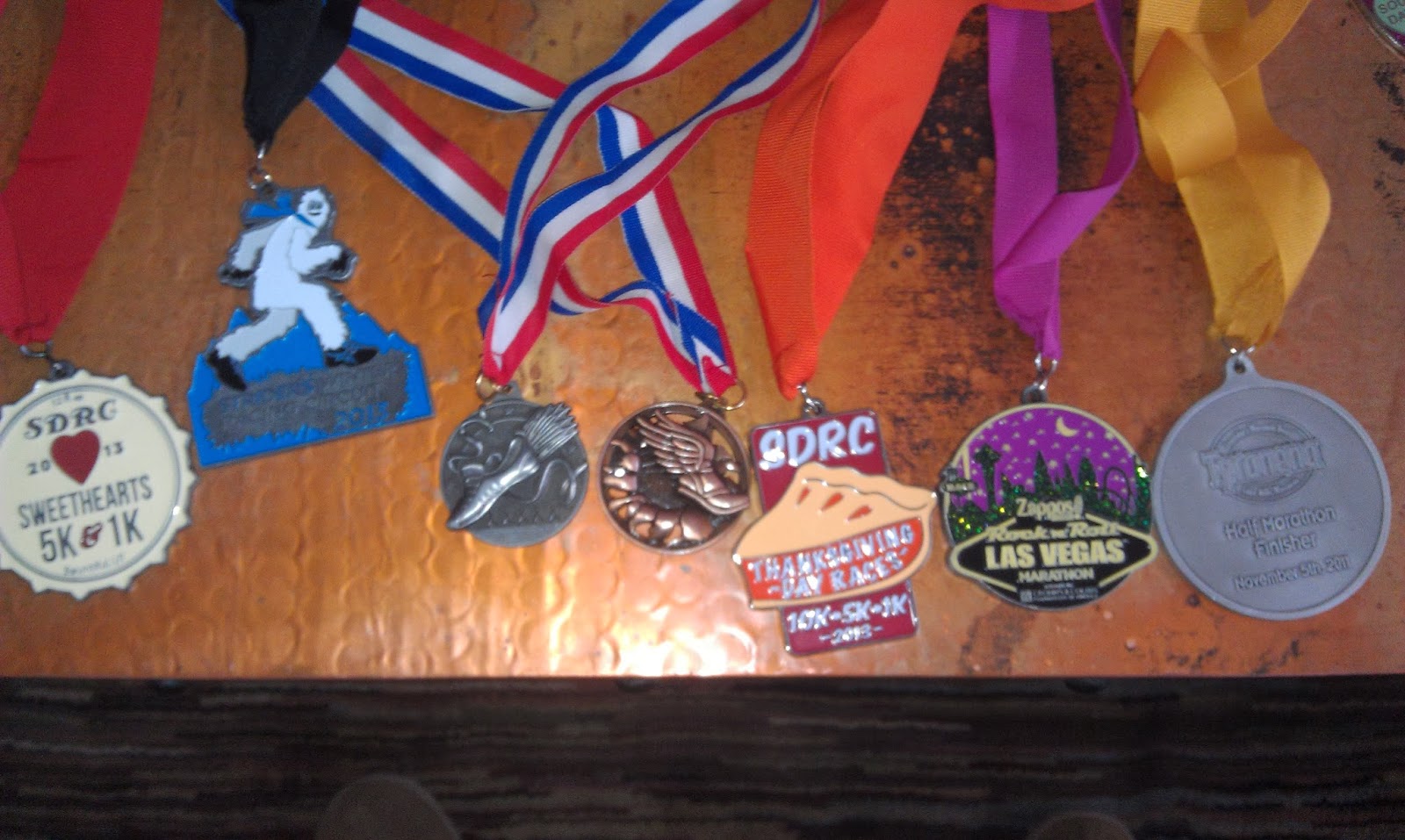 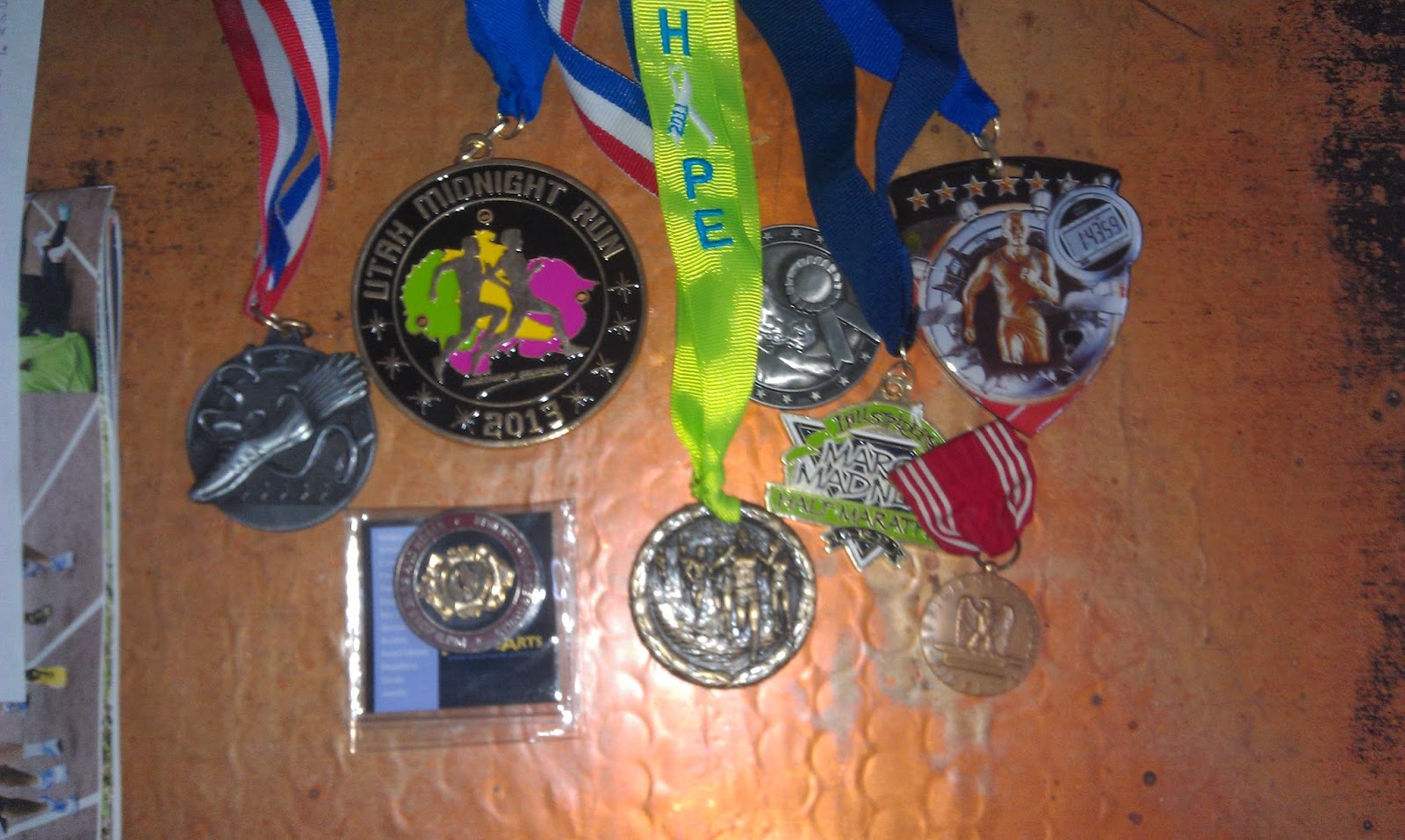