On a whim I decided to run the Bear Lake Marathon located in Bear Lake / Garden City Utah.  I had just run a marathon about 3 weeks in Ogden and this marathon afforded me the opportunity to claim Idaho off my 50-states list. Not that I am trying real hard to knock off all 50 states, but let's just say I am working on it.

The race starts in Idaho, about 4 miles north of the border and runs along the east side of Bear Lake, before rounding the southern edge of the lake.  You then run north on the west side of the before finished in downtown Bear Lake.

Bear Lake is definitely a resort town, featuring some small ma and pa restaurants and some charming lake side houses.  The lake is sky blue and cold.  It seems to be an attraction for anglers and those doing water skiing.  The beaches are very rocky but seem to be popular for wading in the water or just sunbathing.

I had to be at the race at 5AM to pick up my bib.  I had set my alarms at 3:45 (3 of them!) but I was up at 3:15 after a fairly decent night's sleep.  I am glad I got up early as it afforded me more time to eat and pack up my stuff.  I ate some Life cereal caveman style (just straight up) and drank some Gatorade.  I also filled my Camelbak and headed out for the hour trip through a canyon.

I only saw about 3 other cars during the entire trip and I was sort of worried I was going to run into an animal on the way back.  There were many signs warning of cattle, deer, and S-shaped curves.  It was pitch black and unfortunately I couldn't appreciate the views (more on that later).

I arrived at 5AM at the race start and picked up my bib.  I sat in the my car for a while and got on the bus to take me to the marathon start.  I should've claimed my seat on the bus instead of dawdling in my car.  I had seen 5 buses and figured that I'd certainly have a seat.  No, only the first two were reserved for marathoners--- this was a small race.  All the seats were filled, so I had to choice to either stand or find some place to sit -- which I did.  The bus was completely packed but I quickly made small talk with a woman from Streamwood.

About 5 minutes later a guy drove up and unceremoniously started the race with a simple ready-set-go.  I started to question whether or not this was legit.  Again, I only paid $60 for the race so this was as low budget as it could be...

There were maybe 150 marathoners there -- tops.  This was a different breed though.  Many were there to run 2 marathons in 48 hours.  The race company had had a marathon in the previous day in Idaho so many were Marathon Maniacs and were proudly sporting their tank-tops. There were also many walkers.  Some had even started before the race had officially begun...

I took off at a low 9 min per mile.  Since we were running on the east side of the lake, we were largely in shade as the mountains blocked the sun.  We were in constant view of the lake and while the course is largely billed as flat, there were some gently rolling hills.  Like clockwork, there were water / Powerade stops every 2 miles or so.  I was wearing my camelbak and thank goodness I could still drink.  The temperature was in the upper 50's and within a few miles I was breaking into a good sweat.

Also, along the side of the road I could see carcasses of deer -- bones that had been there for months or years.  And it wasn't just one every now and then, it was every quarter mile.  I suspect they get a lot of accidents up there and just leave the animals to rot on the side of the road.

The run was quiet with minimal car traffic as we hugged the east side of the lake.  There were some nice state parks / camping groups that we passed by and as the race dragged on, I looked longingly at the lake in order to cool off.  I know the race was going to get more difficult the minute we got to the south end of the lake as it was bathed in bright sunshine.  Also, as the race progressed it got warmer.

I also forgot to mention that the race is at 6000 feet elevation, so running was definitely more labored.

I definitely felt more in control in this race compared to Ogden.  In fact the wheels didn't real come off until about 16, when all the rolling hills (which seemed mostly up, by the way) and the heat started to take its toll.  My 9:00 minute per mile pace suddenly dropped off and it was all about maintaining my strength, dealing with the oppressive heat (when I left the race, my car said 71 degrees), and deal with the blazing sun.

The final 10 miles were pretty tough.  I could feel the heat continue to take its toll on me and as I approached each aid station I gulped plenty of fluids.  My time continued to fall off and the final mile I probably rolled in around 13 min / mile (it doesn't hurt to mention that the last mile was 100% uphill).  I was also starting to get nauseated and I felt a calf cramp coming on, which luckily never happened.  The final line was pretty sparse -- a jumbo "Finish" arch, a couple of soldiers handing out medals, and minimal cheers.  This is a small time marathons folks -- so if you are looking for bands, crowds, and the all the trimmings, you won't find it here.

There really wasn't any crowd support in this race, although I did sort of make friends with a cow bell ringer who was following the race and a woman who was supporting her husband who happened to be from Kenosha...

I finished in 4:39 (according to me -- they haven't posted the results yet) -- my slowest marathon yet.  Again, I jumped into this marathon on a whim and only 1 week of tapering.  I wanted Idaho off my list and I already told myself that this race was all about the experience and not about placing well.  Don't get me wrong -- I was trying out there, but I let myself off the hook and just let whatever be, be.

The shirt is actually a pretty nice one.  The medal wasn't terribly fancy, but will suffice.  The post race spread consisted of lemonade and water.  Of course, they had some Pepperidge Farm cookies, fruit and candy bars.  All in all, for a bargain marathon I felt it was run pretty well.

After making sure I was okay (and talking with many people) I made the 4 block walk back to my car.  I drove about 5 miles down the course (seeing a lot of the walkers and hanger-ons coming in) and pulled over at a parking area and headed to a super rocky beach.  I went in shorts / t-shirt and just sat in the water for 30 minutes.  Most people looked like they were amazed I could be in the water for that long, but it was heaven.

The water was bone chilling cold, but you know what -- it felt awesome and the soreness and tiredness in my legs and hips vanished by the time I was done.  In fact, today, Sunday, I was half tempted to go for an easy run -- I felt that good.  So for those that are reading this -- jump into an ice bath -- you will feel much better.

All in all, this was a very good experience.  Sure my time wasn't that great, but I definitely got to check out a beautiful section of Utah, bonded with some kindred spirits along the race and afterwards (many of them were from Chicago, by the way) and all in all, had a great time. 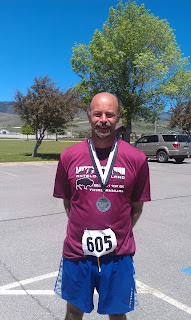 Smiles all around. Notice the sunburn 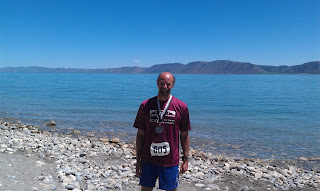 Just about ready to go for a Swim 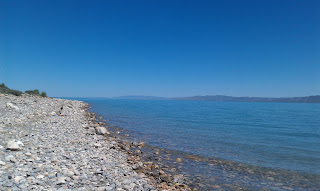 On the other side is Idaho, I am in Utah 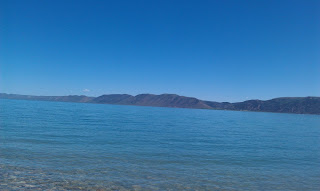 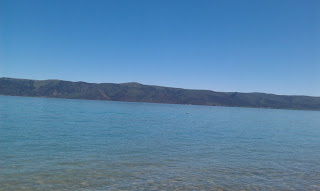 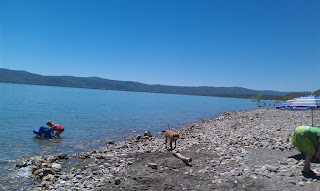 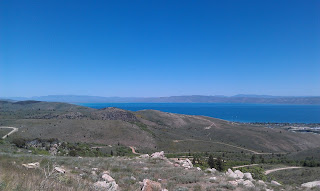 I started running somewhere on the other side of the lake. 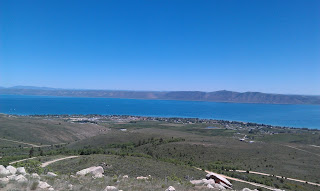 And ran along that side as well. 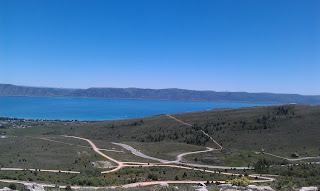 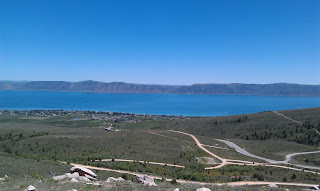 Garden City is below...