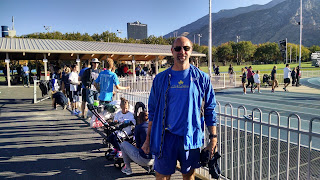 
Well I was really jonesing for a race this weekend.  I haven't raced since the 2nd week of September and I was looking to toe the line once again.

There wasn't a whole lot to do choose from this weekend.  The St George marathon was in full swing this weekend, so many races take a week hiatus as a result.  I was looking for a 10K or maybe even a half, but there was nothing but a bunch of 5Ks.

I looked through the race calendar and I found the University of Utah race and the Brigham Young Homecoming race.  Both supported their respective students / scholarships.

I sat on if I wanted to race and when I went to register for the U of U race, registration had been closed.  So that left me with going to the BYU race.  The BYU race was $10 cheaper, a bit further drive and to be honest, I have no affiliation with the school.  It was also extremely competitive.

I haven't visited BYU before and have heard it was a really beautiful campus.  So I figured why not and ponied up for the race. 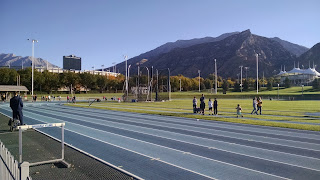 The race had a really funny start time: 9:45.  I rolled in just shy of 9 and quickly picked up my bib and shirt.  Parking was a bit of a headache but I quickly figured out that parking in the football lot was the way to go.

I wound up using the restroom a few times and warming up.  I couldn't use the track on account they were holding kids' races.  But there was still plenty of space to do some laps on the grassy field.

There is a lot of competition at this race.  Just about every BYU graduate who was a runner and who wasn't running the marathon down south was there.  And it seemed like a lot of young runners were there that clearly looked fast.  For a 5K, they had a pretty good turnout. 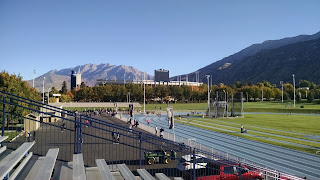 The race started promptly at 9:45 along the north road along the university.  Unfortunately, from the start you are running uphill.  It isn't an awful hill but it is enough that makes you start gasping for breath -- so soon too!

You basically are running east along the closed-to-traffic route along the university.  The road was  lined with yellow-leaved trees and it was really a nice experience despite grinding up a hill.

Luckily, you crest the hill after about 3/4ths of a mile.  Here you start running into a lot of people waiting for the parade (which looked like a big deal).  There were tons of little kids high-fiving runners and basically cheering us on.  In fact, about 2/3rds of the race we had a decent crowd lending support.  There also was music blaring from speakers.

Traffic was closed off to the runners and there were a handful of business and university buildings.  Not terribly scenic but very runnable.

After reaching the summit of the hill, you are greeted with a nice downhill.  Nothing too crazy, but definitely enough to let you recover a bit and start picking up the pace.  My first mile was in the low 8's, which surprised me but was right on target.  I didn't even hear my watch after 2 miles and didn't even know my time but looking at it now, it was a nice mile -- at 7:50.

The last mile is a bit of a grind.  The crowds are gone and you are making your way back to the university through some of the back service roads (as well as passing by a few, small restaurants).  The course wasn't marked that well at this point.  If I hadn't had someone in front of me I most likely would've missed a turn.  I think some turns had volunteers but I really would've been lost had I been in the lead pack but it was hard to tell if they were spectators or part of the race. 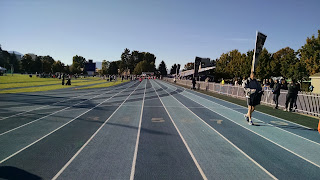 The last mile is mostly flat with a few rollers.  But I was gassed and I just kept trying to keep the wheels moving.  My speed endurance is really gone and I wasn't too surprised to see that I ran an 8:50.

I really pushed it once I got onto the BYU track.  Running on the spongy surface was a treat and my goal of breaking 25 minutes was in site after a glance to my Garmin.  I pushed it through and was pleasantly surprised to see a 24:50 on the jumbo screen. 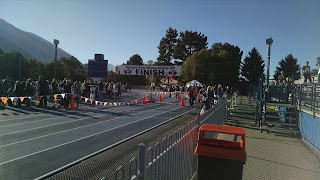 
I was pretty happy with my time.  I have been doing some speed workouts and I feel like they are making a small but noticeable difference.  I've been trying to run more shorter races as I am hoping to bring back some of my speed.

I knew I wasn't going to place in my age group on account of how competitive the race was (I think there were 600 runners).

I walked off the post race windedness and eventually grabbed some blue pancakes.  Apparently they are free for all comers. 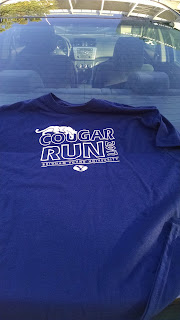 My knee held up fine as all my other body parts.  However, my knee was crackling a bit during warm-up.  Nothing painful, but definitely disconcerting.

This race was a bargain.  I got a really nice 5K, a post race meal and generally a good experience throughout.  There weren't any water stops on the course and no mile markers.  In talking with others, they felt the course measured up (on person ran 3.08 miles).  So while my Garmin is reporting it short, I feel it was fairly accurate.  We did run under some overpasses and made quite a few turns, so the Garmin could've easily gotten lost.  I would also hope that the BYU track organizers certified the course.

The shirt is a tri-blend cotton shirt.  I was expecting something of this nature, but it would've been cool to have a tech shirt.

I'd run this race again.  It was well organized, cheap and a good form of entertainment.  Am I a BYU Cougar fan now?  No...