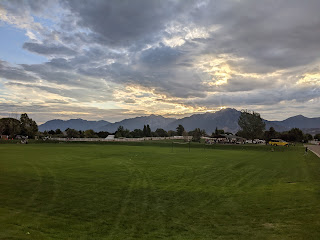 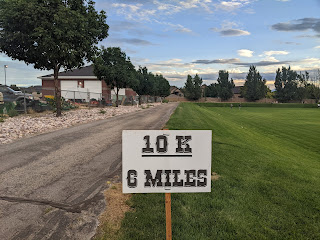 I discovered the Bluffdale Badlands races a few years ago and it's been on my list since 2018.  It is a low budget race and doesn't cost a whole lot (about $20). It is also conveniently located about 15 minutes south of where I live.
For the price of admission you get a professionally timed race, a finisher's medal, a shot at age group awards, a t-shirt and a wonderful post race breakfast.
Normally I do the 10K but with injuries lingering in the rear view mirror, I opted in for the 5K.  I've never run the 5K but the 10K and 5K share some of the same route, so from the get go I kind of knew where I was running. 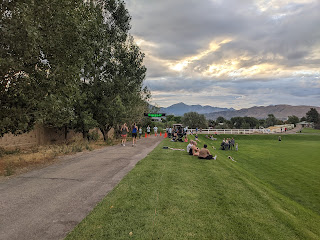 I got to the race site just shy of 6 AM.  I was one of the early birds so I had no problem getting ahold of my bib and swag bag.  It gave me a fair amount of time to warm-up and do a quick shake out run.
The race organizers start the race at 6:30 -- a great time in my opinion.  It isn't terribly hot at that point and the sun is just coming up.
The race isn't chip timed per say.  They do catch your time at the finish (of course) but everyone's start time is the same.  So I lined up close to the west edge of the start line -- as we'd be making a sharp right turn while the 10K head west.
The race started on time this year and I started running with the other 100 some-odd 5K runners.
I felt incredibly slow as people sped by me.  I was hoping they'd burn out and I'd catch more of them as the race progressed.
Almost immediately we made a turn and I was greeted with the dreaded "long hill".  The hill isn't terrible but it is about a mile long and it is a slow grind to the top.  Usually I hit this hill at mile 1.5 in the 10K but here I was less than half a mile into the race and I was already working hard.
I never really looked at my watch during this time.  I knew I'd probably be frustrated but I felt in control and felt like I was taking the hill at an appropriate pace.  I was working with a fully uniformed police officer (who was probably half my age) and a couple of youth runners.  We were running along a residential street and I could see evidence of where the parade was going to run from the markings on the road.
As I was about 75% of the way done with the hill my watched alerted me that I had run a mile.  I figured 8:30 at the worst -- but instead it was an 8:53.  Initially I was shocked but the first mile is definitely the hardest and I knew that I'd get some respite on the flip side.  I didn't give up on the race but I knew today wasn't going to be a personal record type of day.
I finally reached the top of the hill and saw the glorious downhill.  My turnover increased and I felt my pace quicken.  It was also at this point that the first place 10K female runner blew by me.
I had dropped the 2 younger kids but was still working with the police officer (who had put some distance on me) and another teen -- who every time I tried to pass would accelerate, forcing me not to overtake him. 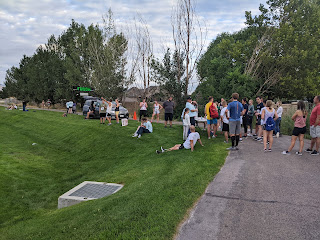 The second mile came up at a much more respectable 8:17. It would've been faster had not the first chunk of the mile was still uphill.
Could I turn this race around?
The race was still primarily downhill but I knew it was going to ease up and mostly be flat on the way back.  I kept glancing down at my watch -- I wasn't concerned about my pace -- but how much further I needed to run.
I had mapped out the course before the race and it had come in at 3.10 miles but the route I was running seemed very different.  As with any time I run a race I really don't know the full distance. Was this going to be a 3 mile race or a 3.20 mile race?
I could see the police car in the distance and figured that was the final turn off to enter back into the Bluffdale City Park.  Also, I was remembering the final route from the times I've run the 10K race.
No one was running behind me but I was still trying to take down the teen and police officer in front of me.  But they had turned on the jets, leaving me loping behind them.
Upon entering the park I realized the course was going to be quite a bit short.  I could see the finish line and I flew by the 6 mile mark for the 10K and there was no way that was .2 of a mile to the finish line.
I pushed hard and crossed under the RunnerCard arches with a distance of 2.93 miles and a time of 24:27. 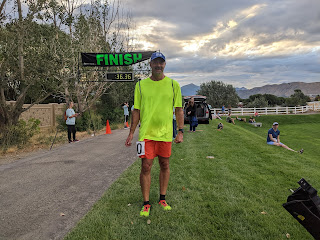 It is very hard to draw any conclusions on this race.  The course was well short and the first half of it is pretty hilly -- with the second half primarily downhill.
I do like how I didn't give up on myself and pushed hard.  From the get go, I had seen an older guy who I presumed was in my age group (this race has big age group awards) so I figured I had 2nd place locked up.  But that didn't deter me from running my all. 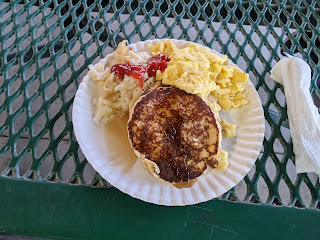 Translated my time comes in around 26:01 for a legit 5K -- had I run the final .17 of a mile.  Not what I was hoping for, but again the course dictates the time and with the hill as long and steep as it was, this was going to be a race that was run for positioning, not personal bests. 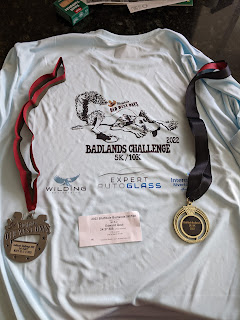 I managed to snag 2nd in my age group. This is the first time I've won something at this race.  Last year I think I was mistakenly given a medal.
I did miss the 10K race. I love that course as you get a better tour of the city.  But it was nice to be running with people in this race.  I also think it was wise for me to do the 5K versus the 10K.  I am ready to race a 10K but just barely.
Post race we had pancakes, eggs and hash browns.  That is one of the highlights of the race -- a nice post race breakfast.
The course was well marked and marshalled by the police.  There was an aid station half way through the race as well.
For the price, I am happy with my experience and am happy to walk away with some additional hardware.  I should be back next year and hopefully ready to take down the 10K again.