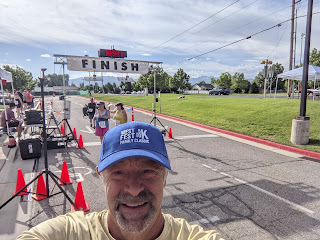 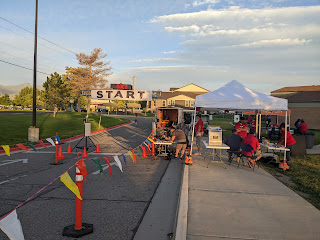 So I've been out of action for a while.  I haven't raced since Easter due to injury and illness -- which more or less have taken me out of my running routine for the better part of 2 months.
I was scheduled to do one of my favorite races this weekend -- the Lamoille Canyon Half Marathon.  But I am in no condition to do a half marathon -- even a fast downhill one.  I had toyed with making the 3.5 hour drive for the 5K but opted to just sit it out.
I was itching to do a race - just a local, low budget 5K and found one -- the West Fest 5K / 10K.  It was only $25, about 15 minutes drive and was tied in with the city of West Valley City's local Summerfest / carnival celebration.
So I plunked down my money and showed up early Saturday morning for the race. 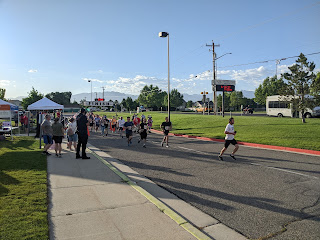 I showed up at the local elementary school an hour before the race site.  I've only dabbled a tiny bit in West Valley City so this was all new area for me.  Easy parking and I was able to get my bib in short order.  Instead of a shirt, I got a hat (I love shirts but I am okay with getting something). 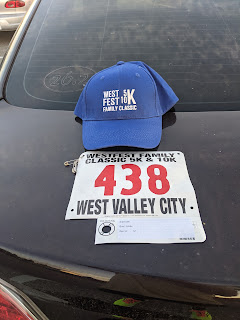 I wound up using the bathrooms a time or two, did a short warm-up.  With my injury and lingering post illness issues, I kept my warm-up short.  It was already warm.
I watched the 10K runners take off -- they had started at 7:10 AM.  I was wishing I had done that race as the course looked very interesting.  My race started at 7:30 AM and it started exactly on the dot. 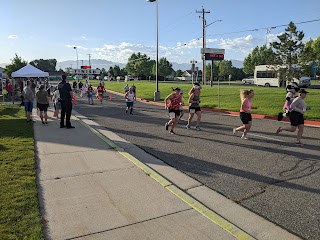 I didn't have many goals on this race other than to finish.  Like I said, I've gotten very little running in over the past 60 days and I knew my time was going to reflect that.  My training indicated that I'd likely be able to hold an 8:30ish pace, which I'd be happy with. 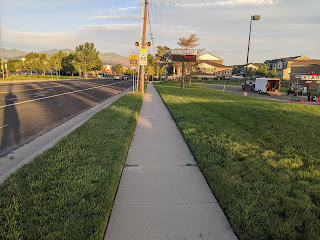 The race started at the elementary school and took off west for a short while before making a turn into a corporate center, bike trail, and residential area.  I settled into a comfortable pace.  I didn't really look much at my watch -- just going out easy but fast enough to be respectable.
Quite a few people sped ahead of me but I was content to just run my own race.  I honestly didn't know how much speed endurance I actually had.
The course was pancake flat and I hit the first mile in 8:15.  Off to a good start but I suspect I wasn't going to be able to hold that. My lungs haven't cleared since my illness a few weeks ago and the few tempo runs I had done indicated I probably wouldn't be able to hold it.
I slowly reeled in the faster starters.  It was warm and many of them were slowing down on account of it.  I took was slowing down and I hit the mile 2 spot at about 8:30, which was my goal pace.  But could I hang on?
The race had thinned out at this point.  The course was well marshalled with aid stations and spray chalk on where to turn.  However, there was a stretch where we were running east for the better part of half a mile and there were no turns but the spray chalk was all sprayed in the other direction (presumably for the 10K).  It was disconcerting and part of me wondered if I had been misdirected.
I was working with one young man (probably junior high school).  I looked behind me -- and the few people I had passed recently were no where to be seen.
I looked down at my watch and I was approaching the 2.5 mile mark and the finish line wasn't anywhere that I could see.
At that point, I think I mentally gave up a bit.  I could see myself running a 5 mile race and finishing last.
I had studied the course beforehand and I finally saw the busy street I knew we had to make a right on before making the final right turn to the finish line.  I wasn't lost at all.
I kept looking down at my watch and looking for the finish line.  It should be coming up soon.  I was hurting at this point pretty badly.  No one was behind me and I had finally passed the junior high student I had been working with, so I was running for pride.
Finally I spotted the school as my watch beeped 3 miles.  The course was going to be significantly longer than a 5K.  I hit the 5K mark (on my watch) at about 26:30 -- about where I expected I'd be and cruised into the finish line, at 3.28 miles in 27:55. 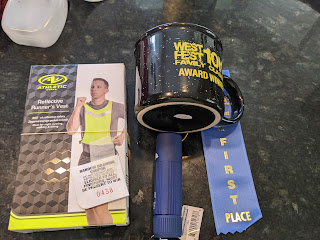 Overall I finished pretty well -- 8th place for the men and about 12th overall.  It was a small race with about 20 10K runners and 85 5K runners.  A total confidence booster for me.
I managed to snag first in my age group.  The prize for that was a simple ribbon.  There were no finisher's medals for this race but every participant got a mug (apparently an age group award from previous years) as well as some running stuff.  I wound up winning a reflective vest with flashlight.  Actually kind of useful being that I'll be running more at dawn during the upcoming summer months.
Post race refreshments were fruit, Chik-Filet Sandwiches and water.  Pretty simple but I didn't expect much for my entry fee.
So performance-wise I did about what I expected.  A dream goal -- and unrealistic -- was to come in under 25 minutes.  2 months ago this would've been easy.  But with a lack of training and still not 100% recovered from my illness, I expected to come in well behind expectations.
This does give me a bit of a baseline to work off of as I work to regain my fitness.  Which was about 90% of the race (also to get out of the house and see fellow runners I haven't seen in a while).
Overall I was pleased with my experience.  It was well organized and the course markings were good. I just wish it had been closer to a legitimate 5K.  It will definitely be well off from my normal efforts.