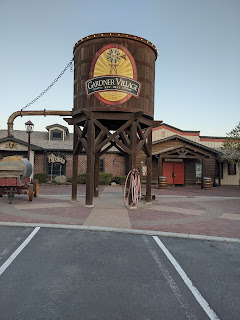 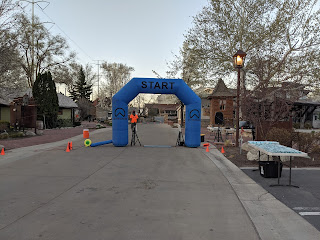 In early 2020 I signed up for the Eggs Legs 10K -- a race put on by OnHillEvents.Com.  It was a race to be held at Gardner Village -- a multi-use shopping center / restaurant area.  However, when Covid-19 exploded on the scene last spring this race wound up being canceled.
Fortunately, everyone's entry fees were transferred to the 2021 event.
The Eggs Legs race is a Easter themed race and is run along the Jordan River Parkway (bike trail).  This is my home course so to speak as I run it nearly every day.  Normally the race runs south into Midvale and South Jordan, but due to restrictions and construction on the bike trail, we had to run north.  This puts me pretty much in my own neighborhood as far as running goes.

I showed up at the race at about 7 AM for an 8 AM start.  There weren't many people there.  In fact, I was half wondering if I was at the wrong place.
However, I was an early bird for the 10K.  The half marathon had already started (and gone) at 7 AM and the 5K wouldn't start until 9 AM.  So it was very low stress to get my bib, my shirt, and find parking.
I wound up doing a series of drills and some warm-ups to kill the final 30 minutes or so before the race started.  I felt very stiff and sluggish, but fortunately the drills and warm-up got me loosened up and ready to race.
The race started promptly at 8 AM and with the staggered start it was a bit of a slow go at first.  I felt pretty good and I settled into a decent pace.
Given the size of the race (I figured maybe less than 100 10K runners) I knew I had a reasonable shot of placing in my age group.  But still I wanted to see if I had improved since last month's 10K at the Lucky 13 race.
I took off at a good clip and at first I had I hard time adjusting to the faster pace.  But once we got to the parkway and the familiar area of my run, I was off and running.
I didn't have much of a goal at this race other than to run low 8's.  Mentally I wanted to run about 8:20 for the first mile and then dial it up a bit.  But I think the thought of PRing and chasing down some of the other runners that had started before me made me go out a little faster than I had hoped.
So I was a little nervous when I ran the first mile in 8 flat.  I had a strong feeling I was going to pay for that mile.
Miles 1 through 2 brought some familiar faces.  I ran into a pair of runners that I've known from other races (or just social aspects of being a daily runner on the bike trail).  They kind of wanted to chat / talk but I was hurting.  And to be honest, when I run, I want to focus and I can usually only mutter a few words as it is.  Fortunately the conversations were short lived and I sort of felt bad, but this was a race after all.
I was running in familiar territory here and I actually was surprised I didn't see more people.  I knew where to turn and roughly where are turn around would be.
The mile markers had been off for most of the race and I wasn't surprised at all when I saw the 10K turn  around come up at the less than 3 mile mark on my GPS.  I think my Garmin read about mile 2.96.
Upon turning around I was greeted with a tiny bit of a headwind.  Great, just what I needed.  I was really hurting at this point.  I definitely was paying a price for my early fast pace.
It took a lot of effort to keep going.  There were a few runners behind me and only one guy who I thought was in my age group quite away ahead.  The deal was though, he had started a good 60 - 90 seconds ahead of me, so so long as I kept close I'd have a shot.
It was also a bit disheartening there wasn't anyone to really work off of.  The 5Kers wouldn't start for a while and I only had one or two half marathon runners fly by me.
I kept looking behind me to see if anyone was going to catch me, but it was smooth sailing.  I still tried hard and at moments I got my wind back, but really was hurting from about mile 4 to the finish. 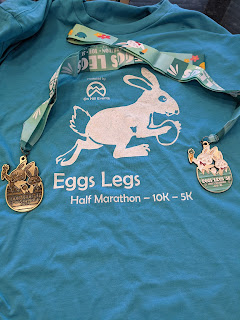 Well this race didn't quite go to plan. Given my time, though, it was pretty much identical to the Lucky 13 race I ran about a month ago.  I was really hoping to go a bit faster.
I still felt pretty good at the end and after cooling off a bit, I managed to socialize a bit. Fortunately my car was parked pretty close to the starting line, so I managed to get my Gatorade.
I wasn't too surprised to win my age group.  Although it was bittersweet in that the guy who I beat by about 10 - 20 seconds made a wrong turn and ran an extra 100 yards or so.  The awards were all the same though and I suppose it won't be that big of a deal down the road. 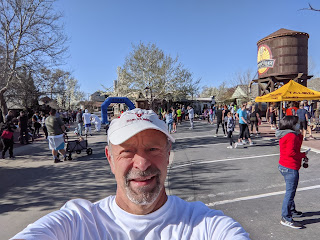 Post race refreshments were limited to sports drinks and pre-packaged ice cream sandwiches.  I didn't see any fruit or bagels -- probably another victim of Covid-19. None the less it was good to race and I managed to score a double medal.  Organizationally, the race was well run with enthusiastic volunteers.  The aid stations were well stocked.  The course was marked with spray chalk, but I already knew where to go.  I know a few runners were misled by a lead runner for a bit though.
I am disappointed that the course was short.  It was pretty close and I can extrapolate my time out to what it should've been but still, it would've been nice to have an official 10K.  I probably could've run an extra quarter mile after finishing but there were tons of people milling about for the 5K and let's face it -- I just wanted to be done.  The medals were cool and I am glad to score a double one.
I had higher hopes for my performance though.  I don't think I really built a good race strategy.  I was just running as hard as I could from the minute I started.  My pace certainly nose dived as it went along.  An 8:20 or so for the first mile probably would've set me up for success.
Lesson learned!
Posted by Eddie Gaul at 2:55 PM