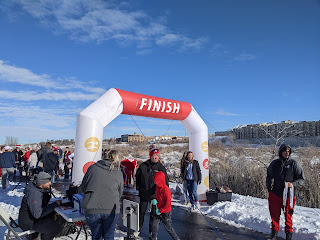 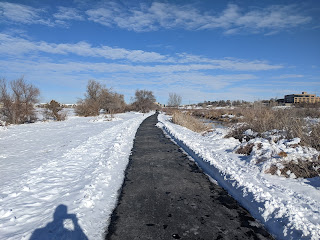 Since I did the Rivalry Run this past summer, I've been doing a lot of the South Jordan race series races.  They are locally run races that are put on by their recreation department.  They tend to be affordable, low key, close to home and just fun.
So I managed to sign up for their winter race series for $35.  I get a bunch of virtual runs and 2 in-person races.  Both include t-shirts and medals.  It is something to do when races are at a lull during the chilly winter months. 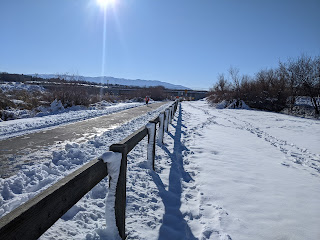 The race started at 10 AM.  The past few winters we've managed to dodge a lot of snow, but this past week it dumped a good 6 - 10 inches in the valley.  The race director had worked on the paved Jordan River Parkway throughout the week to ensure that we'd have a safe course.  In addition, at the last minute, he changed the course so that we wouldn't have to contend with ice.
Unfortunately, the course was going to be significantly short.  A lot of the southern part of the trail was still iced over.  So as I toed the line on Saturday morning, I knew the course was going to be pretty short.  On the plus side, we did have access to the Mulligans Golf Course clubhouse, so there was a warm place to hang out and flush toilets (always a perk!)
I had run a little more than a half mile into the course and I was a little dismayed to find some sections of the course iced over.  It wasn't terrible but definitely I'd be taking some of the turns and shaded sections a little slower than normal.
Also, I just felt "fatigued" during my warm-up.  Was it the wind? The chilly 28F air?  Too much racing?  I was just struggling and to be honest as I waited for the race to start I honestly didn't feel like racing, let alone running.
The race did start and I gave myself permission to just do a tempo run.  The course wasn't in the greatest shape, it was cold, and there generally wasn't anything on the line.  But once the starter started the race, I bared down.
After the first quarter mile, I thought I was just gonna start walking.  My heart rate felt really fast and I figured I was going to crash and burn after a half mile.  I just regrouped and focused on my turnover.  The course was short, so I could get through this. 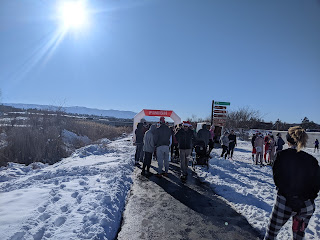 We made our way south on the bike trail and I tucked in behind another runner, but all things considered I was doing okay.  I was a little shocked to see a 7:58 pop up on my Garmin after the quick first mile.
Maybe this wouldn't be a bad race after all.
Another quarter mile took us to the turn around.  The course indeed was going to be VERY short.  I had heard rumors of it being 2.90 miles, but this was going to be a lot shorter.
I was working with a few other runners, but I was maintaining my pace nicely. Part of the return route took us along a sidewalk route.  There was barely enough room to pass people and I could look to my right and see other runners making their way south along the trail.
Finally, we exited the sidewalk and returned to the bike trail.  I now had a very good sense of how much further I needed to run.
Despite the course being short, I was now in full race mode.  I was out of any sort of contention for an award (it was 10 year age increments and a guy in my age group was well ahead of me)   Another person in my age group was behind me, so I was only racing for pride.
I have been doing a lot of speedwork and I knew I could handle the pain that is associated with the final mile of a 5K.
I finally crossed on the 106th Street bridge, did a short hill incline and the finish line came into view.  I glanced at my watch and saw just how short the race was....  I just sprinted to the finish -- finishing as strong as I have for a 5K in a long time. 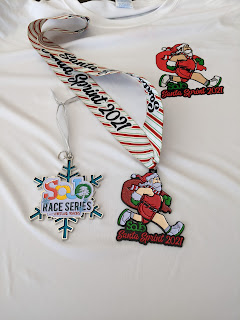 I was actually really impressed with my race.  The footing and conditions weren't the greatest but I had run fairly consistently and I felt like my pace was increasing a bit as the race progressed.
My time for the race was 21:24.  Converting this to a 5K results in about a 24:33.  Totally on par with what I am running for a 5K this late in the season.  Despite not wanting to run / race, I actually did okay. 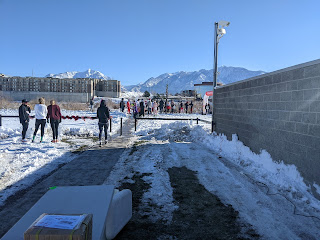 There wasn't much as far as refreshments went.  Just bottled water.  I definitely wasn't thirsty and to be honest for a sub $20 race, I had low expectations for the post race perks.  The race was held at the local golf course and they did have hot chocolate for runners.
I love the medal and the shirt is definitely something I'll wear.  I don't have many Santa running shirts, so this definitely fits with the season.
The race was well organized and there were plenty of volunteers along the course, so that there was no chance of getting misdirected or lost.  I wish there was a more expanded award system, but this was just a run to test my speed.  And let's face it, there aren't many races in December and January, so I'll take what I can get.
Posted by Eddie Gaul at 11:38 AM