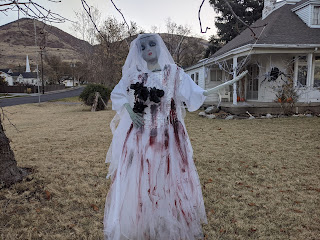 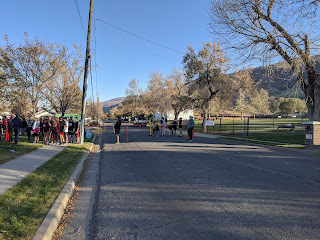 Halloween weekend is always a popular race weekend.  October and running just go together -- well like peanut butter and chocolate.
This weekend I opted to keep thing simple and do the Trick or Trot 5K Race in Centerville UT.
The other race that was going on this weekend was a much bigger race at twice the cost.  Plus, I had already done the sister race last weekend.
This race supported the local high school track team, so I could feel good about doing this one and it was a much smaller race, so my risk of getting Covid-19 was probably less risky. 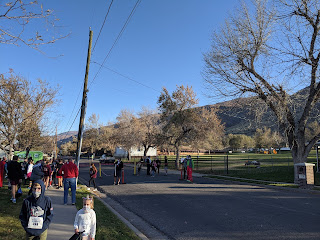 I rolled into the race site - at the Centerville City Hall, about 45 minutes before race start.  I think I was one of the first to get my bib and shirt.
I wound up running about a mile beforehand to get warmed up.  I felt good and my warm-up didn't feel sluggish at all.
Given that this was supporting high school team, the majority of attendants were high school age.  I think there were only a handful of runners who were old enough to vote...
The race started at 8:30 and I was about 15 - 20 yards back from the starting line.  Most of the skinny high school kids were toeing the line.  I knew I wasn't going to be able to hang with them for very long.
Sure enough the race started and the lead pack was gone in an instant, running sub 6 minute miles.  I had eyed my competition (I had presumed ten year age increments but anyone over 30 was in a collective group).  At the start, those in my group got a good jump on me and I figured I'd be lucky to reel them in.  Fortunately, I did... but it took nearly a mile...
The race started off near city hall and went south and then took a quick right turn down to Main Street.  Pretty much the entire race was right turns.  I was a little worried about navigating my way through this race.  There wasn't anything online about it and Centerville can be hilly. 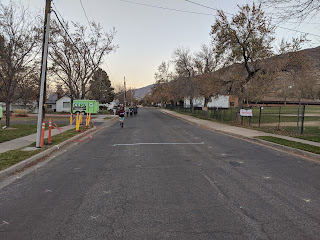 About half mile into the race, we came to the first climb.  I was warned this was here and it wasn't a crazy uphill, but it was enough to take my fast pace and turn it into an ordinary pace.
Finally after ascending the hill, we headed south.  There was a bit more of a climb here.  The area seemed familiar to me.  I didn't think I had ever run in Centerville before, but it turns out that the Handcart Half Marathon goes down that way.  Normally, I'd be dying at this point (about mile 9 or so) but in a 5K, I still had plenty in the tank.
I had totally missed my split for mile 1, but I felt like it was fast.  I hit mile 2 in 7:45.  Anytime I see a 7 for my mile split, I know I am having a good race.  I still felt solid as I kept working on passing a few other runners (who had definitely thinned out at this point).
Usually mile 2 through 3 is where the wheels come off in my race.  But I think running with young adults a third of my age definitely stoked my competitive edge.
I kept glancing at my watch.  We were running along Main Street and occasionally I jumped on the sidewalk if traffic or other runners were blocking me.  Having never run the course before, I wondered if the race was going to be short -- or long.  But I spied the orange cones in the distance for the final 2 turns and I knew the course was going to be a legit 5K.
The last quarter mile I was really hurting, but I pushed it anyways.  No one was behind me but I was working with 3 other teens and I wanted to make a good showing for us masters runners.  Unfortunately 2 of them pulled past me, but I managed to beat one of them -- who turned out to be one of the 5 zombies one was supposed to beat. 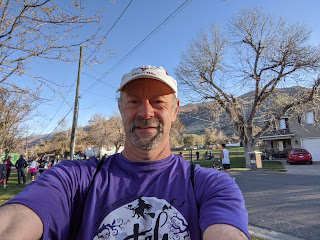 .
I was really pleased with my time.  Anytime I can go sub 25 minutes I am tickled.  But going sub 24:30 -- even better.
I did get some reports that the race was a legit 5K.  However, I think a lot of the race was  measured from running on the street.  Us middle of the packers had run parts of it on the sidewalk, which probably cut a bit of distance from it (also there was some traffic that made it a bit difficult or unsafe to run on the street).
Running the .07 extra, my time would probably be around 24:45 or so.
Post race refreshments included water.  This was a budget race with the proceeds going to the track team I wasn't expecting much. It would've been nice to have some bananas around.  There were two aid stations powered by candy and ... water.
I paid $20 for the race.  So a bargain.  I got a shirt as well.  An interesting Halloween one, but cotton, so likely to see light use.  I did pick up a tech shirt for $5 in their clothing sale. 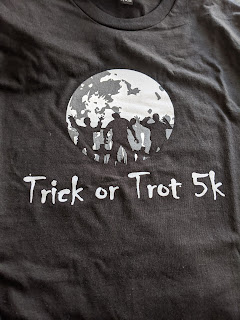 I didn't stick around for awards.  They had a kid race going on and it was taking a while.  As I write this, I don't know how I finished. But given that the majority of the race was run by local area high school track / cross country runners, I know I did well in my age group, but not terribly well over all.
So I came away with this race feeling really good.  With Covid-19 really in full swing right now, I am having less confidence that races are a good decision.  Other than a Thanksgiving Day race, this may be it.  So I am happy to more or less wrap my 2020 race season with this race.
Posted by Eddie Gaul at 1:01 PM