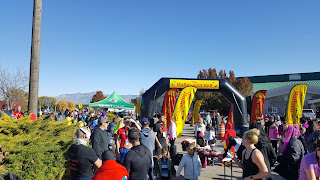 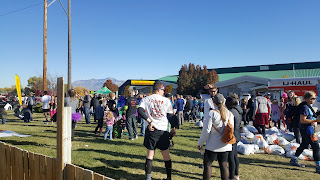 Halloween is a big race time in northern Utah.  It is pretty much dominated by the Halloween Halves in Emigration Canyon and Provo Canyon.  Those particular races will draw over a 1000 runners and they charge an awful lot of money for the race.  They also have a long wait from the bus ride to the start of the race... so there are a bunch of turn offs for me.

That being said, another player came into town offering a Halloween race.  Their advertisements caught my eye on Facebook and I decided, why not.  It was quite a bit cheaper, and it was the second annual race, and I hadn't heard of too many complaints, so why not. 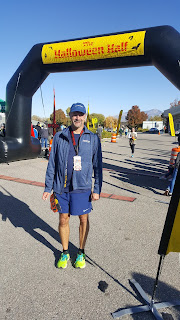 The race was held up in Ogden, about an hour north of where I live.  I've had a lot of great races in Ogden and it holds a special place in my heart.

I rolling in just shy of 6 AM. They had told everyone to get there early if you hadn't gotten your bib the day before.  I was one of the first there and it was a snap to get my bib.

I killed a little bit of time before jumping on a bus at 6:30 and beginning a 15 minute bus road over to the local high school.  It was pretty chilly and I had bundled up with a lot of extra clothing.  I had kill about an hour there.  I had company so the time went by fast.  I was glad I had bundled up with tights and a sweat shirt and medium weight jacket.  It was chilly just sitting on a curb waiting for the race to start.

I started off cautiously as we made our way north along the golden-leaved tree lined streets.  It was an absolutely perfect day for running.  There was a chill in the air, but not terribly cold and the air was clean.  It was picturesque running weather.

I went out in shorts and a long-sleeved shirt and a hat.  I had throw away gloves as well, which I wore for about half the race.  I saw a lot of people bundled up, but I was perfectly happy with what I went with.  I was neither chilled nor overly warm at any point in the race.

I wasn't sure what I was in for during this race but I knew a lot of it was going to be on the local bike trails.  It took about 3 miles before we finally reached the head of one, near the mouth of Ogden Canyon.  I realized I was running the same course as the Ogden Marathon and the Jurassic 5K.

I was moving pretty good and with the weather being perfect, I felt like I was in for a good race.  My splits for the first 25% were spot on with what I wanted to run and I wasn't feeling any undo fatigue, which I had been worried about. 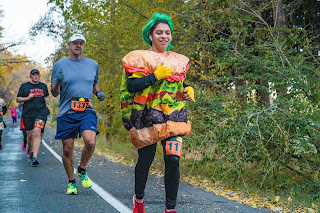 The bike trail was perfect for running.  They are filled with more trees than my Jordan River Trail.  With the fall colors in full swing, it was just stunning to feel apart of nature.  Also, this race course followed the river at various points so there was a stream.

With about 300 or so runners, I was impressed with the number of spectators.  There just seemed to be a bunch out giving us cheers.

For about 9 miles, I got the pleasure of running on the bike trails.  There was very little "street" running after the first 3.  I was a little worried about losing my way on the trail, given that after about the 7th or 8th mile, I was running solo.  I could occasionally spot someone in front of me, but there wasn't anyone behind me.  Fortunately, the organized had spray painted where to turn -- and to be honest, there weren't many turns on the course.

I was starting to do math with my Garmin as to what my finish time would be.  Initially, at the half way point I felt like if I could hold it together, I could eek out a sub 1:55.  But knowing how I run, I knew it was going to be in the 1:57's.

The bike trail was slippery in spots with leaves, but it never affected my running that much.  There were just so many cool places to run along, underneath train tracks, tunnels, paths that lead off into the brush.  I would've loved to have stopped and taken pictures but I was racing and didn't have my camera.

The final mile was probably my least favorite.  We exited the bike trail and were rewarded with a view of the backside of WalMart.  Ugh.  We were on sidewalk at this point and I knew I was getting close to the finish.

I figured the race was going to be long.  The mile markers from the outset were off, by at least .1 of a mile in most cases.  Sometimes races "correct" themselves by the time you reach the finish, but as I plodded along, willing my legs to go faster, I didn't see the finish line getting any closer.

I gave the final push to the finish line and crossed in under 2 hours, my Garmin reading a 1:58. 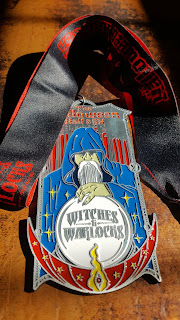 This was a good race for me.  I really felt like I had run well here.  The course was largely flat, with some down hills, and I felt it was an "honest" course, in that the downhills weren't exaggerated.  I haven't done many long runs this year so the fact that I faded in the last 25% of the race was of no surprise to me.

My first 7 or 8 miles were run brilliantly.  I was very even paced and felt like I was in total control.  The last 3 miles, my head wanted to go faster, but my body wasn't willing.

The race had several water stops along the way -- at about 2 mile intervals.  They had water and Gatorade.  They were amply staffed and were appropriately placed.

The mile markers were off.  And I suspect I know why.  The race needed to start at the high school and finish at the parking lot of a drive-in movie theater.  Short cutting the distance on either end would require the race to finish or start in the middle of a road.  Most people's Garmin watches read that the race was 13.26 or 13.27 miles.

The race's medal is a honking big one.  My photo probably doesn't do it justice.  It is heavy and will give you a neck ache if you wear it too long.  I liked the theme and design.  The t-shirt design was also a winner for me but it was a cotton shirt.  So it'll be relegated to short runs and casual wear.

Awards were done very quickly, which is also nice.

Overall, I really enjoyed this race and would definitely do it again next year.  It was priced reasonably (about $50 - $60) and the course was a gem.  The organization was also rock solid.  My only complains were the cotton shirt and the long course. 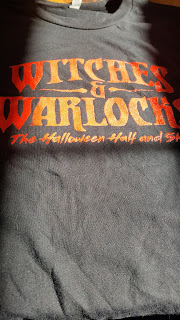 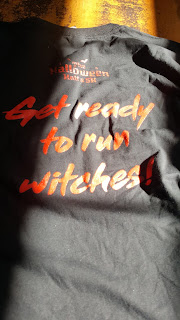