This Month in Running - January

Well I am off with a new year and some new resolutions for the year.  Normally I don't make any resolutions on new years and look at any given time as a chance to make improvements on my life.

This year, my goal is to train a bit smarter and get my mojo back.  I pretty much say this every year but I am taking some actual steps in order to improve my times:

1) I am working with a coach.  I've been around the block a time or two. I know the difference between a repetition and an interval and the difference between a fartlek and a tempo run.  I just need someone to make a few tweaks to my routines.  For now, it will likely be a one time consult.  I live too close to the bike trail and driving anywhere after work just won't do it for me.

2) I've cut my long run down a bit.  This should keep me a bit more fresh during the week instead of constantly recovering from 16 miles.  So far, despite some decent weather, I've been holding it back to 13 miles.  It keeps me ready for a half but I am not burned out the rest of the week.

3) I am actually doing speed work: at least once or twice a week.  This past week I did a series of quarter mile repeats and weekly since the start of the year I've been doing 6 - 8 hill repeats up that hill you see.  The first week I did I thought I was going to die.  Each week, it has gotten progressively easier.  My weakest thing for running is uphills and maintaining a consistent pace from start to finish. 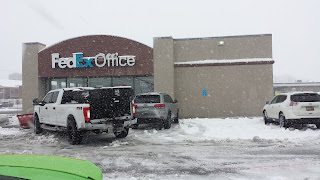 Part of the joy of running is doing weird / fun things.  Sometimes it even proves to be useful.  On Martin Luther King day it snowed in Salt Lake City.  Not a lot -- maybe 3 - 4 inches, but it made driving treacherous.

I had the day off and I was going stir crazy.  Unfortunately, we also had a package that HAD to get out overnight.  I certainly didn't want to drive there given the yucky weather, so what was a runner with cabin fever going to do? 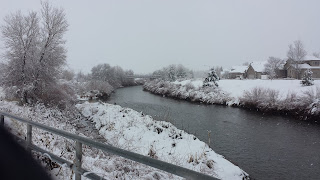 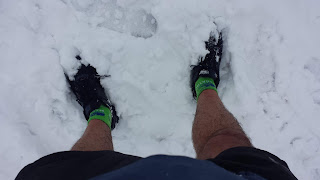 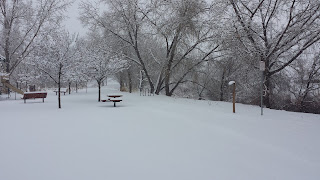 Run there of course.

So I put the parcel on my back in a waterproof sack and ran the 3.1 miles to the Fed Express Office.  I was a site to see for sure.  I didn't care about my pace.  I just needed to be safe in regards to watching for people who were driving too fast given the conditions.  I made it there and back.

The things we do out of the ordinary are always the most memorable. While the conditions weren't exactly life threatening or even dire, it was an adventure. 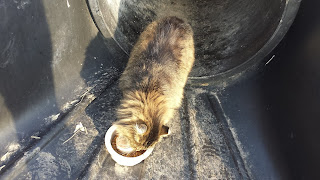 I continue to feed the cat every day.  Even when I leave town, I try to accommodate for her.  She is there every single day.  So on days I don't even feel like running, I know I have to get out there and feed this cat.

We have tried a total of 5 times to gather her and bring her home.  We learn something every time we try.  But this cat doesn't really want to go home and sadly you can't explain that you are offering her a better life where she won't have to fend for feed, hide from predators and have someone to care for her.  Also, her hiding spot is about 200 - 300 yards away from the parking lot, so just getting her to the car is a battle.  I am hoping to get her soon as I have a road trip to the Saints and Sinners Half Marathon in mid February.

Taking her in, still would be a bit of a trial run.  She'd have to be house broken and get along with our existing cat. 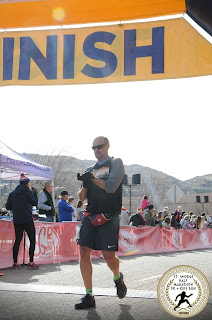