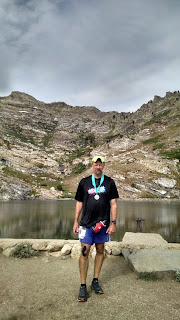 
As someone who just loves to go to Nevada at the drop of the hat, I always look forward to this race weekend.  It gives me the perfect excuse to pack up and head west.

Angel Lake is a fairly small lake situated at the top, nestled in a valley high above Wells and in the heart of the Ruby Mountains. 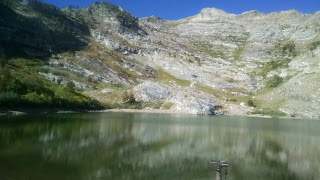 This race is only flat in the first mile and a half.  The rest is primary uphill, with a brief respite in the middle.  The miles at the end are relentless tough -- as you climb higher and higher the air gets thinner.

I am not sure why this race is one I come back to.  I suppose it is the remoteness and the challenge.  Only a handful of people do the race and you are certainly there to set a person record in the half marathon.  The views on the way up are also awesome.

In short, I do enjoy the challenge.  Alas, this may be the last year this race will be held (after 32 editions) as the race organizer announced they wouldn't be running the show next year. 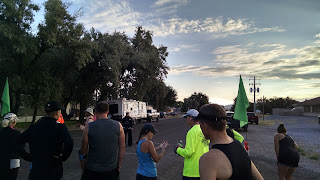 
I arrived in from West Wendover a good 45 minutes before the race's start.  I quickly picked up my shirt and bib and made some small talk.

The race's headquarters is located at the local swimming pool, since there is a triathlon event that is also part of the race's day.

The race started at 7 AM and I started off with hopes of breaking last year's 2:33 time.

I felt pretty good and wound up running with a group of guy's my age.  I was hopeful that I could place in my age group, but I saw that the guys that were in my age group were quite a bit faster than me. Darn it, looks like I wouldn't be in the running for an age group award after all. For a small race, why did so many 45 - 49 year olds come out?

I settled into a pace and made my way through town.  Within 15 minutes of starting I was looking at the hills that I would have to conquer in order to get to 8300 and see the sites of Angel Lake again. 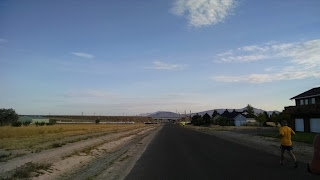 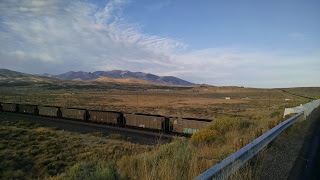 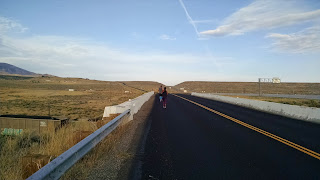 After about 5K the race gets harder and it really doesn't let up.  I just learn to accept my pace is going to be a lot slower and try to enjoy the scenery and the smell of the desert, which was just awesome.

The air temperature was cool at the start.  Originally I was going to run in a tank top but chickened out at the last moment and wore a regular short-sleeved shirt.  About 2 miles in I was regretting that decision.  I wore a black one and it just seemed to trap the heat. 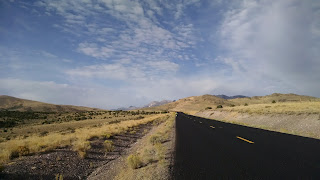 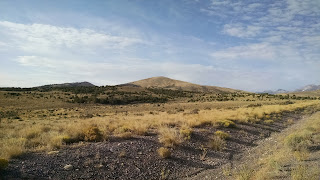 Occasionally, I would turn around and take a picture of where I had come from.  And I tried to keep myself occupied with enjoying the scenery.

Last year, once the race started I hardly saw another soul with the exception of cyclists ascending the hill.  This year, there were a few runners that started slow and passed me.  The organizers had people going up and down the canyon so I would get cheers and encouragement from them.  Other racers were just as encouraging -- it was just a nice group to run with.  However, for the majority of the race, I was 100% on my own and no one within ear shot.

I had hopes of finishing faster than last year, but my mileage hasn't been good and despite my new leg strength, it just didn't seem to translate into a good run day for me. 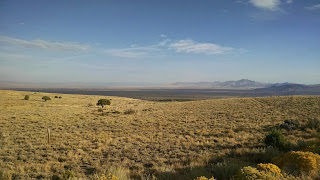 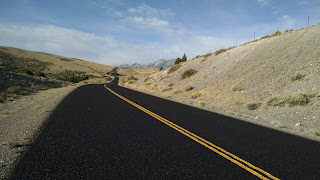 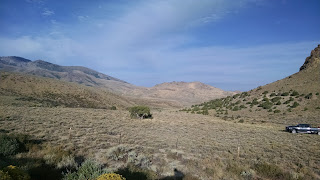 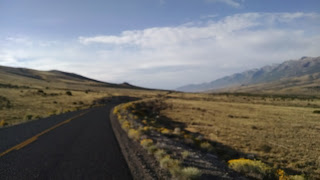 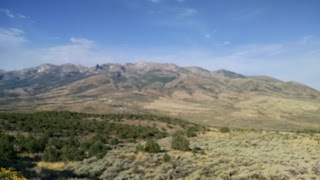 There were aid stations every few miles but I am so, so glad I brought my own.  I went through all of my Tailwind and grabbed something to drink at just about every aid station.

Despite having making the drive up to Angel Lake several times, I had grossly underestimated / forgotten how tough the final 3 miles are.  I almost could walk faster than what I was running.  I was just shuffling along trying to maintain some form of a running pattern.  The last 3 miles are just intense.  It is straight up and a lot of switchbacks.  Just once you think you've reached a summit, it only turns and keeps ascending. 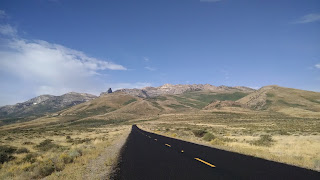 My legs were just out of juice by the time I got to the top.  And after having grinded through 11 miles of hills, the final half mile I could hardly muster a shuffle.  I was just so spent and the thin air was making it worse.

I was so happy to finish and receive the hearty congratulations at the end. 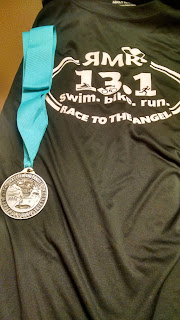 I got my finisher's medal and grabbed something cool to drink and walked over to the lake.  Unfortunately I didn't get any good pictures of the lake, thanks to my camera being sweaty.  But I've taken pictures of it before.  The water level seemed down from previous years and there were only a few people fishing.

Part of the logistics of this race is getting back down.  If you are fortunate to have a running partner or a carpool or a life partner, they can meet you at the top and get you back down (the course isn't closed).  But I had no such options.


The race director can get you back down but you are at their mercy / convenience.  Luckily, I managed to find some Elko folks who had finished together and were heading down.  Like the previous years of doing this race, I enjoy meeting new people and was so happy to make some new friends.

I was sad to learn that I didn't beat last year's time.  I felt really good -- fresh and strong.  My knee didn't bother me at all (the left one complained more than the right one) but I just haven't put enough miles in the tank to really run this race well.

Course support was good but the first aid station seemed a bit late in the game.  I think it wasn't until mile 4 or 5 that it came around.  After that, there was one every few miles.  All of them served water, Gatorade and some had bananas.

Post race included chocolate milk, water, chips and make-your-sandwiches.  I couldn't stomach anything but somehow managed to get down some Fritos and water.

There were a lot of hearty congratulations at the top and everyone was asking each other why they keep doing this race.  It is very humbling to run 30 - 40 minutes slower than your usual half marathon time.

I keep doing it for the views and for the bragging rights.  Not too many people can claim to run up a canyon as hilly as this one.  And I've done it three times now.

I hope the city of Wells continues this tradition.