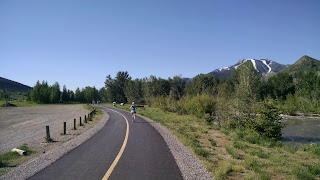 By the end of May I was looking for a race to do.  There wasn't much on the local calendar and I had talked about going back to Casper Wyoming to run the half marathon there -- I had run the full in 2014.  But I began to think about it and I wanted to do something "new" -- someplace I hadn't been before.

While I still had some places to visit in the Casper area, I opted to go someplace completely new: Sun Valley (or Ketchum) Idaho.

This is a tourist-type town located smack dab in the middle of Idaho.  It is popular with celebs who want a quiet retreat as well.

It resembles a ski resort town, like Vail and Park City Utah -- with prices to match.  It is also a jumping off point to many hikes, bike adventures and skiing.  It wasn't too far of a drive (about 4.5 hours) and I could visit a lot of places along the way and make it an extended weekend.

I quickly found a hotel, made the reservations and the trip was set! 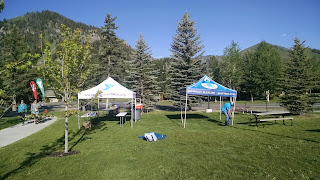 First off, Ketchum located is at 5800 feet elevation.  And I felt every foot of it.  I live at 4300 but the extra 1500 feet of elevation was like breathing through a straw.  On the way up I did a quick 200 yard jog to view a historical site in Twin Falls and I was breathing hard and almost lighted.  WTF!

So I was a little nervous when I woke up on Sunday morning.  I ate my cereal and hydrated myself and got my Tailwind drink ready and headed out the door an hour before the race.

I made the 5 minute drive to the race start and was one of the first ones there.  Packet pickup was friendly and quick and before I knew it, I had about 50 minutes to kill.  Luckily, the race is headquartered at the local YMCA, so there was shelter (if the weather was bad) as well as clean toilets.

I wound up chatting with a reporter and did a very brief interview on how to stay fit (hopefully I can find it online when it goes live).  I sat around enjoying the sun and sipped on a drink.

The race started at 9 AM.  I guess the weather is consistently a wildcard and this year it was warm.  I think I wasn't the only one who wanted the race to be started early.  The sun was out and with weather predictions to be in the mid 70's for the day, I knew I was going to be hot. 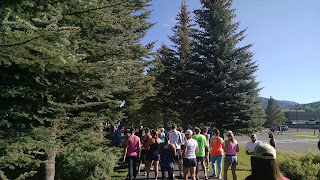 The race started promptly at 9 AM and about 100 people took off on the bike trail.  The speediest of the bunch quickly headed out and I found myself sort of in the back.  I found that most of the people were locals and they weren't huffing and puffing like I was.  Damn elevation!

The race was 90% on a bike trail that circumnavigated itself around the city.  A small section was on wood chips.  I would've easily missed the first turn had it not been I was following 50% of the racers.  It sort of bugged me and given the small number of racers, I wondered if I would be missing another turn later on in the race.

As I ran, I felt like I was holding back and tried to keep in for a low 9 minute per mile pace.  I felt like it was really difficult.  I had been able to maintain that pace fairly easily in training the last few weeks, but this week it seemed so hard.  I was properly rested and other than a twinge of runner's knee, I felt pretty good.

As the miles ticked along, I commented to the passing runners how hard it was.  They almost always replied, "You aren't from around here are you?"  I replied no, but I live in Salt Lake, it shouldn't be this difficult to run at 5800 feet versus 4300. 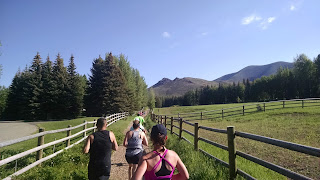 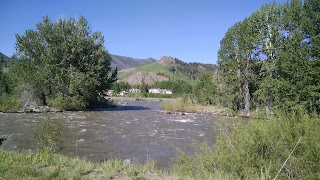 The first few miles were just pretty.  The Big Wood River was just roaring due to the heavy snowfall and it was a pleasant experience to hear it.  It was intensely warm and sunny -- I was thankful to be wearing my sunglasses.

Around miles 4 - 5, we had to do some climbing.  At this point, my legs were sort of shot and I knew I was going to be in for a long morning.  I just wasn't sure how to handle it. Walk breaks? Slow down even more? Just suffer through it?  I just felt like I was running through quick sand. 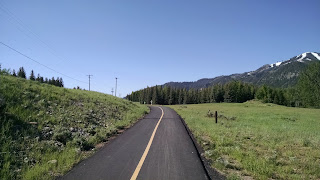 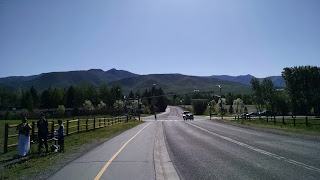 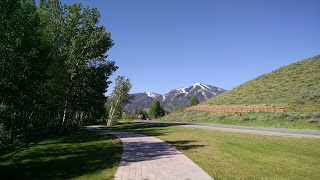 The real headaches began at mile 7 or so.  Here there was a relentless series of hills.  At this point, I was almost getting the chills from the heat and I was just beat up.  Why exactly was I running this? 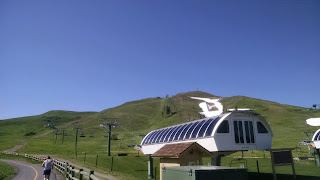 After ascending the hill, I really never saw anyone for the rest of the race.  Luckily, the course was well marked and at any confusing intersections they had someone there.  They also had plenty of self-serve water stations (although some volunteers did show up and help with filling water / Heed glasses).

I tried to console my self that I was running okay and that conditions were tough.  I also tried to enjoy the stellar views and the golf-course / skiing mountain views.

The route took us through some very expensive neighborhoods (everything is expensive in Sun Valley) with beautiful mansions.

For the most part, the bike trail was empty except with us runners.  However, I'd encounter the average pedestrian or cyclist out for a Sunday ride.  I got some encouragement from them -- they could probably tell how much I was suffering. 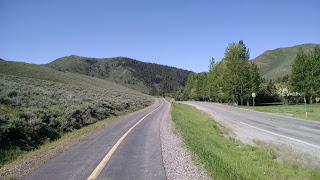 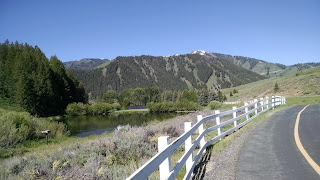 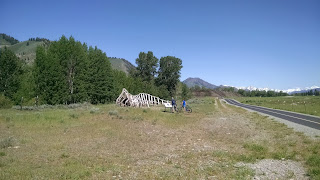 The final few miles were really nice.  I had returned back to the river and there was a bit of shade.  Also there were a lot more people and it just helped to have a little bit of a fan base encouraging me.

At this point I was starting to close in on a few other runners.  But I just had nothing left in me and was just resigned to plod along. 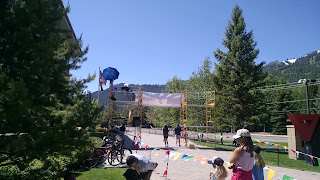 I almost passed out when I finished.  I was plain exhausted. It almost felt like I had run a marathon.  What the heck?  Why was this so tough?  I felt like a total rookie.

The finish line area was pretty sparse of people.  It was a small race to begin with but the lead pack had already cleaned up and moved on.

I wound up grabbing a protein drink, some Gatorade and some water.  They had some fruit around but my stomach was clearly not having it.

I made small talk with various people and tried to take solace that this race was sort of a "do it for the scenery" But I expected to finish in the low 2 hours -- instead I really struggled to do 2:12. 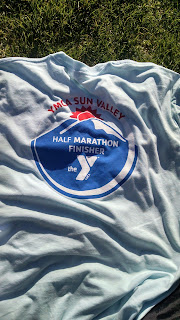 After making sure I was okay, I headed back to the hotel and wound up spending the next hour moaning.  I was just exhausted and dehydrated.  I had quite simply been beat by the 4 H's of running: Hills, Heat, Humidity and (H)el(l)evation.

I was really happy with the race though.  The course was stunning and other than the first turn, it was easy to navigate.  I paid $70 for last minute registration and got a well supported, professional done race.  The medal was average for a half marathon but still nicely done.  The website / post results are a bit lacking and could use some improvement.

Volunteers and sponsors were simply awesome.  They had plenty of water stops, but about 60% of them were unmanned.  I am so thankful I carried my own hydration again.  I wound up not stopping much except near to end to soak my hat in cold water from the drinking fountains. 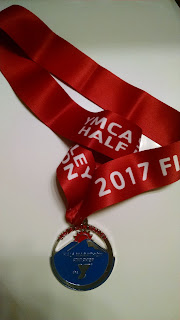 I would definitely run this one again. There is a lot to do in this town (I'll write about this more in subsequent posts) and the course is just so beautiful.