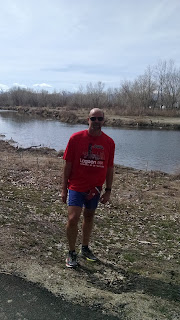 Well, I didn't run a lot this week.  The tail end of the week was filled with work related meetings that started early and ended late.  Nothing kills your ambition to running then LONG meetings.  I tried to get up early on Wednesday and I successful got a solid 7 miles in, but I was dead the rest of the day.  While I can appreciate morning runs in that I am fresher and feel a little more energetic, but it seems a little short-lived.  I haven't had any sugar in my system, I have bathroom issues, and it tends to sap my strength for the rest of the day.

I totally failed to run on Thursday as a result (the meetings really killed me), but I did get a walk in.

Sunday's long run went well.  My Garmin said I ran 18 miles, but I suspect I ran quite a bit longer.  I traced it out on MapMyRun and it was close to 19.5.  I think my GPS lost signal and couldn't resync itself after pausing it and using the restroom on the way out.  All things considered, the long run was good, but I suspect it sabotaged my weekend race.

I wish I had better things to report about the half marathon I did but it was going to be tough day. I rarely run well after a weekend long run and it was hot and hilly.  It just wasn't in the cards and it wound up being another sufferfest.

On the flip side, though, I had a fantastic weekend and managed to knock off an item on my ever growing bucket list.

I didn't do the sugar free diet like I did last week.  I was mindful of what I ate (except when I was in Vegas).  I didn't weigh in at all so I can't report anything too exciting, other than I am conscious about what I am sticking in my pie hole.  Also, with the company meetings there was a bountiful selection of junk food, so I probably didn't do myself too many favors.  Hopefully I'll have good news this coming weekend.

No races this weekend ... at least that's the plan.

I did, however, goof on some previous posts as to the date of the SLC Marathon (I had it listed as 4/15).  Looks like I have an extra week of training, hence this coming weekend I should be able to get in a solid long run.  This will be my first marathon of 2017.  I am crossing my fingers for good weather and springy legs.