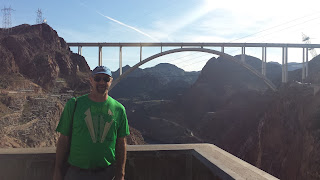 As I usually like to do after a road is recap what I experienced.  This is more or less for me, as an online diary of my adventures.  It really doesn't have a whole lot to do about running, but it does capture some of the experiences I had -- big and small.

I like to go back, from time to time, and read my previous adventures and remember what I've done.  Often times, the small details of trips fade and without this record, I'd likely forget about them.  So bare with me in this short indulgence.

The plan was to get home as early as possible from work, throw my stuff in the car and head out before too much Friday traffic delayed me.  I had about a 6 hour drive to Boulder City, Nevada and I was fortunate we had company meetings that ended just before 2 PM.  Shari got home at 2:30-ish and I was itching to go.

Unfortunately, our 20 year-old cat had other ideas.  She hasn't been doing too well and Friday evening she was sick.  So after some hemming and hawing, it was decided I'd have to go solo (shucks (/wink)).

I beat most of the traffic and made excellent time.  We were having unseasonably warm March weather and by the time I got to the southern part of the state, I was filling up my car in 80+ degree weather.

Another half hour later and I pulled into the Casablanca Hotel and Casino in Mesquite, NV.  Mesquite is the first Nevada town you come to when going to Vegas.  I had a coupon for money off at the buffet, so I helped myself to some cheap carbs..... and it was a bargain too!  I held back on the precracked crab legs (it's never good to eat too much seafood before a race) 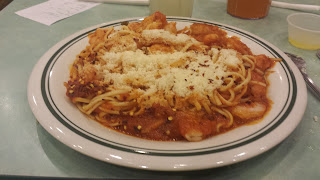 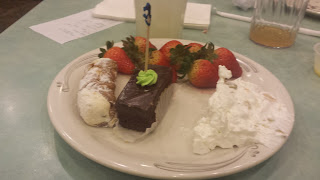 I gambled some and actually left up a few dollars.

I made the rest of the way to Boulder City in just under 2 hours.  Traffic was a little tough near Vegas, but by the time I was passing through, it was well after rush hour. 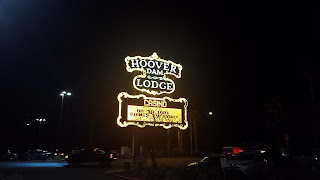 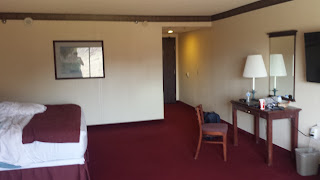 The hotel was nice.  I had visited before and I thought it was very classy.  It isn't like the strip at all... very subdued and quiet.  The casino didn't have a lot of my favorite machines, which was good.  It stopped me from gambling too much (although I did play).  I wound up giving back some of my winnings that I had won in Mesquite but I wanted to go to sleep, so I called it a night fairly early.

I slept horribly.  I am not sure why but I think I was nervous about the race and I was bug-eyed from driving.  If I was lucky, I got about 2 hours of sleep and it was fitful at best.

In the morning, I wound up running the St Patrick's Day / 6 Tunnels Half Marathon, which you can read here. 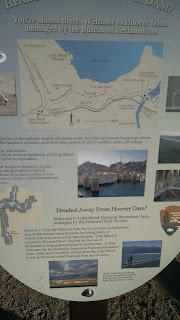 After the race I tried to use the pool at the hotel, but it was out of order -- the entire bleeding weekend.  Argh.  So I wound up eating lunch at the hotel (Rancho Heuvos) which wasn't too bad and it certainly was filling. I also sucked down a ton of Arnold Palmers.  I was completely dehydrated and I wound up drinking a lot throughout the day.

After eating I was kind of depressed with my time at the race, so I headed upstairs to lay down in the room and find something to watch on the 20-channel TV (that had a line of static running through it).  I was starting to fall asleep -- in my over caffeinated state -- and there was a knock on the door.  Housekeeping....

So I had to find something to do.  I suppose I could've hung out in the room, but I didn't want to just hang around, so I wound up filling a water bottle up and walking to the Hoover Dam along the Lake Mead Train Hike, which you can see here.

I had a strange occurrence as I was coming back to the hotel.  I was walking through the parking lot and a big burly Harley Davidson riding motorcycle guy pulled up next to me and asked me, "Hey... what kind of car do you drive?"

He was obviously pissed off and asked his question again.

I explained to him that I had just finished a hike and I hadn't driven my car in several hours.

He looked me up and down and gave me a dirty look and sped off.  I figured he was looking to kick someone's butt after a road altercation (and it would've been no contest versus me).

He sped off north and not more than a few minutes later paramedics came flying down the road from the opposite direction.  I tried to find something in the paper but to no avail.  I suspect he had witnessed a hit and run and was looking for the culprit.  Just glad it wasn't me.

I cleaned up and gambled some more at the hotel and I wasn't having any luck.  Luckily, I wasn't too into gambling and decided I needed to find some place to eat for dinner.

I Googled around for a cheap buffet.  I was thinking of trying the Railroad Pass Buffet up the road but decided I wanted to go the Fiesta Hotel and Casino.  Usually the Station Casinos do a good job and I know they'll have a decent casino.  I just hoped that the line wouldn't be too bad. 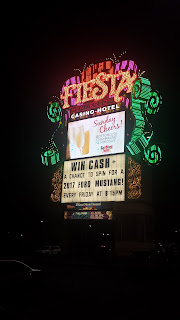 I got there and it wasn't too busy.  I wound up blowing some money on Fu Dao Le and my minimal losses turned into a slightly larger one.  Luckily I knew when to quit and found the buffet.  It wasn't too bad for $10.  They pretty much had the same food as the other Station casino buffets, but the upkeep wasn't as good and there weren't any premiums (other than the Mongolian grill).

I made my way back to the Hoover Dam Lodge and played a bit more there but once again Lady Luck wasn't with me and I called it quits after about 15 minutes. 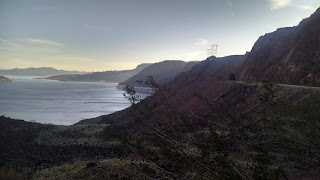 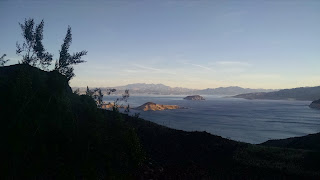 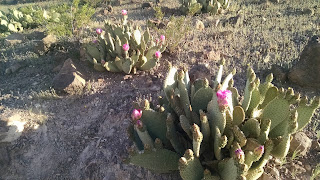 In the morning, I woke up early and went for a quick run.  I was still sore as anything from the day before, so it was more or less a shuffle for about 3 miles.  I wound up taking a few pictures as well.  There were a few other runners out and it was a really nice and peaceful run.

After cleaning up, I checked out and went and visited my aunt and uncle in Summerlin at the Rampart Hotel.  I haven't seen my uncle since -- well, when I had a full head of hair.  Probably since the early 90's.  We caught up over breakfast and I wound up winning about $10.

Originally I had planned on taking Monday off and staying the night in Mesquite (I'd get it for free) but I wasn't terribly in the mood for gambling and I didn't really want to blow a day off.  So I wound up driving from Summerlin back to Salt Lake City.

Traffic going north is starting to resemble what I experienced going from Las Vegas to California on a Sunday evening.  Utah's speed limits aren't for the faint of heart and people were driving like maniacs.  I don't think I'll ever do that again.

I did make it home safely -- and 4 days after running the half marathon, I am still fatigued and even a little sore from it.

But I have a lot of good memories about this trip.  It was nice to get out on my own and really tear up the hiking trails.  I've wanted to hike the Lake Mead trail for a very long time -- and I even got a chance to run it.  Maybe next year I'll repeat this trip...
Posted by Eddie Gaul at 7:23 PM