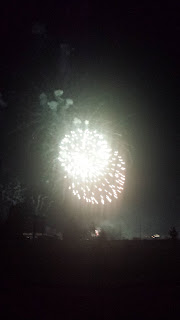 Sadly this was a pretty ordinary week.  Last week's 13 Miles of Freedom really put a dagger in my heart in terms of running ambition.  It was just a grueling race and made me really question how much I am really enjoying running let alone racing.  In fact, a lot of my runs this week, I felt like I was dragging an anchor and feeling extremely sluggish and uninspired.

Whether this is a case of over training and / or the heat / summer doldrums, I am not quite sure.  But I've had more than a few days where I just felt like I was going through the motions of lacing up, and suffering for an hour.  I really did NOT want to run.  Sure, maybe once a month I get that feeling, but this was happening on a near daily basis.

Sadly, I have a bunch of races coming up and in many ways I am dreading them.  I really can't stomach another subpar performance and my running "gusto" is at an all time low.

Faithful readers know that generally on Saturday I do my long run. Very rarely do I do less than a double digit run.

So, as usual, on Saturday I woke up and started assembling my "stuff" for around a 13 - 14 mile run.  While rooting out my fuel belt out of the kitchen cabinet I knocked a can of Counter Assault Bear Spray off the shelf, where upon it fell on the floor.  Either the safety wasn't on or it slipped off, the impact of it falling on the ground caused it to emit a very, very short burst.

If you've been sprayed before with pepper spray then you can skip the rest, but this stuff is NASTY.  It was choking, blinding and made me want to choke.  It is basically a cocktail of the hottest peppers put into an aerosol can that is meant to blind / stop a charging bear.  I only had about a microsecond of it blast in my kitchen and I spent the next 2 hours airing the house out and cleaning every nook and cranny of the kitchen.

By the time I thought I could go for a run, it was already pushing 80+F out with blazing sun, so running was out of the question.  Sadly, the day's weather didn't improve much either.

I wound up suffering from major skin irritation for the better part of 24 hours.  This stuff BURNS.  If you have to clean up a mess wear gloves.  Ultimately, I took a shower with Dawn Dish Soap which saved me from major aggravation.