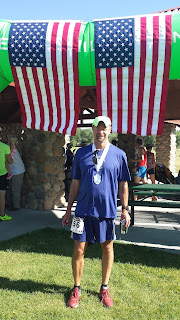 
Well, I wanted a jam packed 4th of July weekend and I decided to start it out by signing up for the Freedom 13 Half Marathon.  I had some choices for races, mostly some local 5Ks, which regrettably, I should've signed up for.  More on that later though.

Either way, this race was fairly reasonably priced and located about 2 miles from my house.  It was low key and I figured, why not, how bad could running 13 miles in the dead of summer be?

I rolled into the race site at about 6:30 and picked up my bib.  Very efficient process.  Initially I saw the line and was like, gosh I'll be lucky to get back to my car and get ready.  But it was only a few minute way before grabbing my shirt and sunglasses.

By the time I ran to the next park's bathroom (which was unused) and came back, it was time to start the race.  It was sunny and exceedingly warm.  I opted to run in a tank top and shorts with sunglasses.  No hat.  I am so glad I didn't wear a cap and trap my head heat.

The race was located on the Jordan River Bike Trail.  This is practically my back yard and I run on it nearly every day.  Why would I pay $55 bucks to run on a section of bike trail that I run every day on?  I don't know... call my a race junky.

I knew today was going to be rough after the first mile.  I felt good but I could tell it was going to be a warm one.  Despite the 7 AM start, I was already thoroughly sweating by the time I got to the first water stop.

I was carrying my own fluids and was very glad I did.  They had water stops every 2-3 miles supplied with fruit, gels and bottles of water.  Instead of cups, it was little 8 ounce bottles of water.  If you didn't go through the water in time, you basically had to carry the bottle to the next aid station (or you could pitch it on the trail, which I did not do).  Ugh.

By the middle of the race I knew I was in for a death march to the end.  It was just too warm and I could feel myself feeling really yucky.  At about mile 11 I started to feel a little clammy, which is a sign of heat sickness.  There was a bit of a breeze on the way back though and that seemed to help.

The course wasn't super well marked.  At about the 3 mile mark the trail forks left and right.  I knew from previous experience we were supposed to run right, use the pedestrian bridge and cross over a road.  However, most people took the left fork and wound up short-cutting the course a bit.  They had to cross a busy road though.

Near the 5 mile mark the course forms a lollipop.  You were supposed to take the east side, run 1.5 miles to the north and take a bridge that crosses the river and run back on the west side.  Most people took the west side.  I think part of the problem was no one was manning the split off and most people don't listen to the race director's instructions.

The last 5K was a death march.  I was very dehydrated and there was nothing left.  They weren't giving out age group awards and really the only goal I had was not to finish over 2 hours.  I had spotted the 2 hour pacer walking at the turn around, so at least I wouldn't have to have my ego bruised when he passed me. which he would have.  I was just a shambling mess when I stumbled across the finish line.

I was really in a bad state when I finished. I wasn't kicking myself for a new PW (personal worst) but I wasn't happy.  I think I was just too exhausted and listening to everyone talk at the end made me realize everyone else had suffered in the heat.

I was able to grab a soda or two and some of the doughest pancakes I've ever eaten and enjoy what felt like a nice summer day (it was so much nicer sitting rather than running in it).  I was really dehydrated and worked on getting my salt levels back to stable.

For $55 the race was low key.  Like I said, I run the route that the course was on weekly on my long run, so I knew every nook and cranny of it.  I guess I am addicted to finish times, t-shirts and medals. It was a workout and it gave me some good race experience:  I knew almost right away it was going to be a challenging day and I dialed my pace back quite a bit and left my time and pride take a back seat (at least a little).

Racing in July in Utah is always a tough deal.  You can do a 5K pretty easily but the heat and today's humidity made it challenging.  Typing this, I still don't feel 100% right despite drinking tons of fluids.  Some of these hot races really take a lot out of you, and today's certainly did.