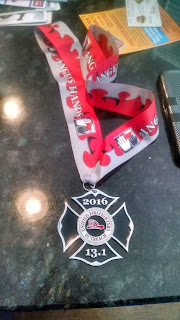 
Yes, I know I am racing a lot.  And now is the season to do it.  In Northern Utah, you can pretty much run a race every weekend during the spring.  And while I knew I probably shouldn't, this race was fairly close to home and sponsored by a charitable organization.

So at the last possible moment this week, I registered for the Unified Firefighter's Outreach Half Marathon, which was being held about 15 minutes south of me in Herriman Utah.

I wound up picking up my bib at the Salt Lake Running store on Friday afternoon, which made it super easy and stress free come Saturday before the race.  Pretty much park, use the bathroom a time or two and then run. 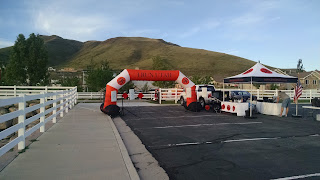 The race started a little late -- about 5 minutes late due to some announcements and bag pipes ceremony.  It was interesting and I really didn't mind.  The race was very low key for me and I had zero expectations on the race other than to run it and see the sites of Herriman.

Herriman is a burgeoning city a most of it is filled with very nice houses or houses under construction.  It seems like Herriman, despite it being over 140 years old, is now the place to move to.

I ran into a friend of mine named Josh, who was a pacer for the 1:40 group.  He had run the race last year and I asked him about the course.  They had advertised it as flat, but my Garmin would sort of say otherwise.  I came up with 429 of elevation gain, most of it at the end or very beginning.

My legs have been pretty dead due to high mileage and a lot of racing and from the get-go I knew it was going to be a challenging race.  Also, the sun was rising and there was no shade.  Conditions weren't going to be good for a PR day.  Also there was some wind which I was hoping wouldn't be a factor. 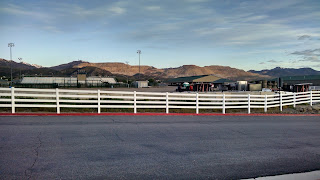 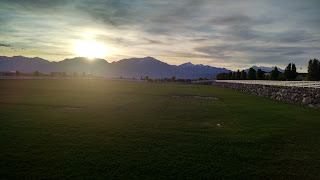 By mile 4 or 5 I really felt like I was laboring.  My legs were dead and I could feel it getting warmer.  Unfortunately, this race had a total of 3 water stops: one at mile 3.5, 6(ish) and 10(ish).  I wasn't carrying anything either and soon my mouth felt super dry.  Each water stop did have gels though, which was a nice perk.  There were a few places where the city was watering their lawns with industrial strength sprinklers, which I gladly ran through to cool off.

The course was run through the residential areas as well as some of the roads around town.  There were police presence at the major intersections and I was never impeded with my pace.

The course was a bit difficult to follow though.  I talked to a few people who had taken a wrong turn or who were confused on where to go.  Luckily the guy I was following for most of the race was easy to follow.  They did have volunteers at the intersections that might cause confusion but there were a few that I would've missed had I been running on my own.

Around the half way point, I was starting to really wear down.  The wind had gone from a gentle push on my back to blowing directly in my face.  Also feeling extremely warm and dehydrated didn't help as I pushed up the hills.  I was in desperation mode for the last two miles as it was on a bike trail that made an ascent up to the finish.

Luckily, no one was behind me for as far as I could see but I was furious when the 2:00 hour pacer passed me (he was way off schedule).

I was never so happy that a course was short (I measured it at 12.72 miles) and that it was over.  Just not a good race for me on any level.

After the race, I greedily sucked down a bottle of water.  I grabbed my (awesome) medal and went to my car and got a Powerade I had stashed there.  I felt awful and sort of woozy.  I honestly think I was on the verge of heat sickness.

I had a meal ticket which allowed me to have a free entree from a food truck.  I chose the Matterhorn Food Truck and got a decadent slice of French Toast that was pure sugary goodness. 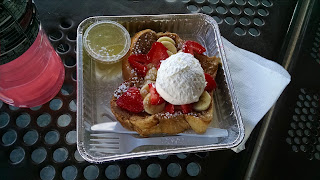 I stuck around for a while killing time.  They weren't doing any age group awards but the day was just nice to sit around and socialize.  They had fruit and sports drink to snack on too and the 5K had drawn a really nice crowd, so there were plenty of people. 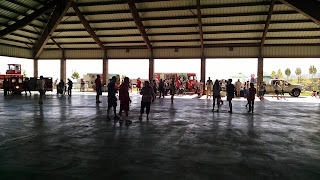 Overall, this race was hit and miss.  The t-shirt was (high quality) cotton and didn't actually advertise you ran something.  I love the medal -- probably one of the best I've gotten in a long time.  The 3 aid stations were well-crewed and offered gels, but 3 is too few for a half.  They need at least one more, if not two more. 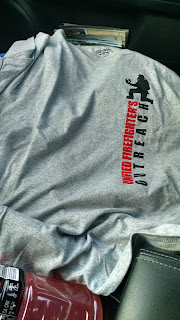 I missed not having any age group awards as well.  I may have qualified for one.

The course was okay.  I think I had run on sections before during the South Jordan Marathon (which dips its toe in Herriman) so some of it looked familiar.  But as far as beautiful views, not a whole lot.

I'd probably run this race again.  Mostly as a training exercise.  I paid $60 for it a night before registration closed and for a half marathon experience, I got what I paid for.  Plus the money went to a good cause.  The food truck food voucher was also nice.  Just hope they get a "real" tech runner's shirt for next year.
Posted by Eddie Gaul at 12:35 PM