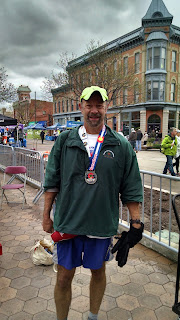 
*My Garmin apparently lost connection for a bit on mile 14.  I suspect the course was around 26.3 miles long.


In my quest to running a full marathon in every state, I opted to run the Fort Collins marathon.  I was going to run the Colfax marathon, but at the time I was making plans, the Colfax one wasn't going to work out.  I had family stuff happening and getting to Denver during that time would've been a crapshoot at best.

I had read that the Fort Collins Marathon was a worthy race, so I ponied up the money and made the required hotel reservations.

I was a little worried about the weather.  It was snowing in Wyoming and the prediction in Colorado was a mix of rain and snow.  I had fears about waiting in pouring rain for the race to start and then running for 26.2 in more of it.  Granted, I've survived a lot of tough conditions, but being cold isn't one of my favorite things (although I'll take cold weather over hot any day)

I arrived on Saturday around 4 pm to get my packet.  It was incredibly simple and fast.  I lucked out with a bib # of 888, which is  Chinese number for good luck.  So I was a bit optimistic after getting that. 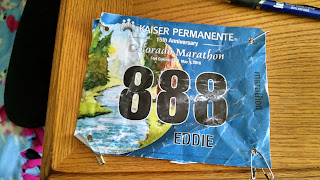 The swag bag was pretty basic and not terribly impressive.  The shirt is a nice tech shirt with a scene from the course on the main area.  I wound up buying some shirts from previous years for friends and myself -- they were incredibly cheap. 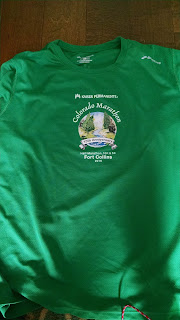 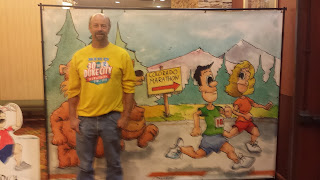 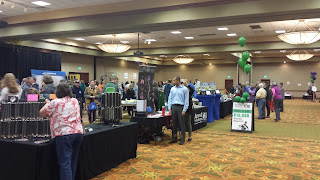 We wound up eating at Carabbas Italian Grill in Fort Collins, which was a hop, skip and a jump from my hotel (the Candlewood Suites).  It was good and I had plenty of carbs socked away to ensure a decent supply of energy.

I slept horribly -- as expected.  Being in a hotel room and being anxious about the race had me on edge.  I am willing to wager I got around 3 or 4 hours of fitful sleep before my alarm went off at the ungodly hour of 3:30.

I wound up scarfing down some cereal and an ice tea and assembling all my gear.  I checked outside and it wasn't raining.  Awesome!  However, the weather predictions had said the rain would start just at about the time the race was starting...

I wound up heading out just after 4 am and made the 10 minute drive and easily found a parking spot right next to the marathon bus.  I made it on the second bus and had an insanely long drive up the mountain to the starting line.  Props to the organizers for the coach buses (with bathrooms).  At least the 40 minute ride up there was in style and comfort.

There wasn't any place to sit up there and the ground was wet and cold.  I had brought a variety of clothes with me for just about any situation.  Luckily I only had about an hour to wait before the race start.  I wound up cycling through the bathrooms a time or two and made small talk with a variety of people from all over the country.

It had just finished snowing and was continuing to snow a bit -- definitely better than rain! 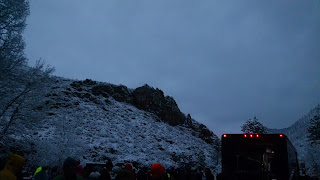 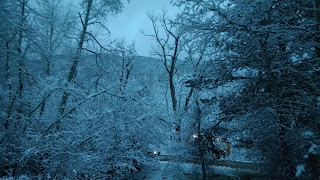 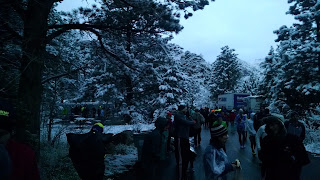 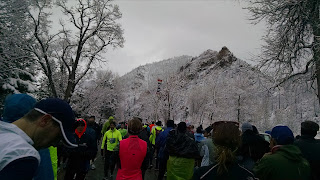 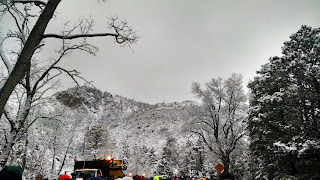 I went out in shorts, heavy-gloves, a long-sleeved tech shirt and a wind breaker.  I probably could've gotten away with a double shirt but I was anticipating rain and figured the jacket would serve me better.  Either way, for the most part I was really comfortable for the race and not too hot nor too cold.

My goal in the race was to cross the half way point at about 2 hours and hopefully muster enough endurance to cross in the low 4 hours.  Studying the course beforehand, the first 15 miles or so are largely downhill.  It is a gentle downhill and I never really felt like my pace was out of control.

The race started promptly at 7 am and almost immediately I had to hit the bathroom.  I was cursing myself for not using it one last time, but as usual, the lines for the bathrooms were insanely long during the final minutes.

While I was enjoying the views, it was hard not to concentrate on the growing problem in my bladder.  The first water stop had a pair of bathrooms (or maybe just one) but it was occupied and I was going to wait.

I was trying to spot some shrubbery along the road to use but there wasn't a good spot.  It wasn't until just after mile 4 that I saw another guy jump into the woods and I followed.   It wasn't the greatest hiding spot but it certainly helped.

The course follows the Poudre River and everywhere I looked I either saw a flowing river or snow covered pine trees and beautiful rock formations.  With the help of the gentle downhill, I felt like I wasn't expending any energy at all and I was very pleased with the consistency of my splits.

Sorry for the jittery photos or those with my thumb in it, most I took while juggling the phone, my gloves and trying to maintain my pace: 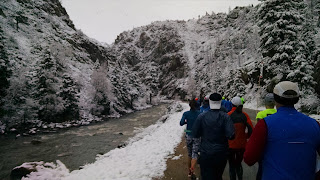 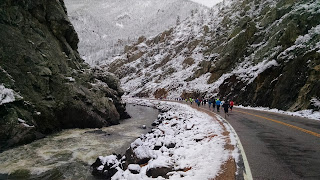 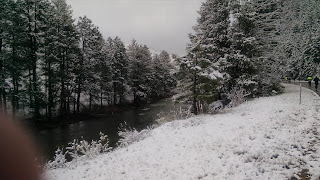 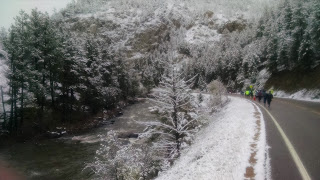 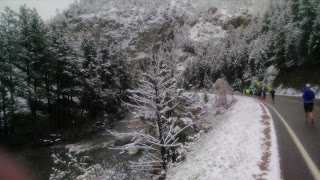 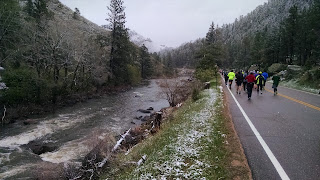 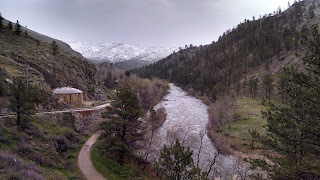 Aid stations were every 2 miles (or so) and were serving up Nuun and water.  It wasn't until mile 18 (or so) that they started handing out gels.  Luckily, I had packed my own gels and had my own Powerade.

The course finally (and regrettably) left the canyon just after mile 15.  At this point, you are running on the side of a main road.  The organizers had coned off the entire right lane and there was plenty of space for me to run.  Crowd support also picked up here and it was much appreciated. 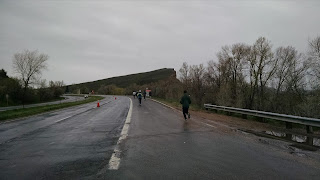 The really "big" hill came at about mile 19.  There was a large hill here that was about a half mile long.  It wasn't terrible to climb and I was under the impression the rest of the course was uphill (or at least rolling hills).  The course had a few tiny hills, but for the most part it was flat or even a little downhill.

I was feeling pretty good at mile 20 and I was working my way passing people.  I knew my pace was faltering a bit but overall I was hanging in there.

After some road running, the race diverts itself onto the local bike trail.  Running the final miles of a marathon on concrete wasn't very nice.  My hill battered quads certainly felt it here and while in spots there was a dirt section to run in, I just sucked it up and continued on the concrete.  Also, there were a suspension bridge or two that just felt shaky when many runners were on it at the same time.  It almost gave me motion sickness.

I really started to get in desperation mode around mile 24 or so.  I had been dreaming of hitting 4 hours but I knew I'd really have to turn on the jets.  I kept counting down the quarter miles.

I knew my GPS was off and once I hit 26 miles, I looked around for the finish line.  I could certainly hear people but the finish line was well over .2 miles away.

There was a solid crowd pushing you into the finish, despite my 4 hour finish time. 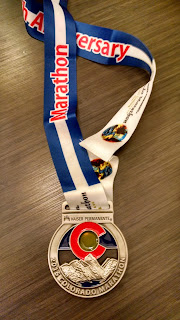 After crossing the finish line I grabbed a water and circled around a bit.  Faithful readers know that sometimes I get faint feeling after a marathon and stopping too soon -- especially in warm weather causes me problems.

I had no problems and I actually felt very good.  All the half marathoners were gone (and I hadn't passed any on the course) but there was plenty of food, which consisted of fruit and other items.  I got a poster congratulating me for finishing as well as a pretty nice medal (thanks for making a special marathon one versus sharing the half and full.

There were plenty of vendors -- many of them offering samples.  I wasn't hungry but managed to gulp down a slushy.  It was chilly out and my body temperature was dropping.

I made small talk with people as I made sure I was competent enough to drive home.  It wasn't terribly hard to find my car and some helpful people pointed me in the right direction. 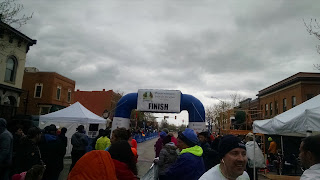 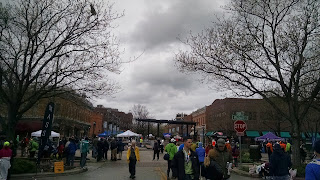 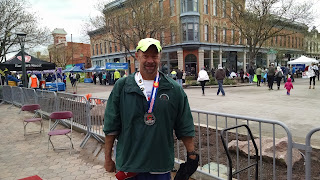 Overall, I felt like I could've done a bit better.  While my Garmin congratulated me on a new PR (at least since I've owned it), I felt like this course could've easily netted me a high 3 hour marathon or even a very low-low 4 hour one.  I did stop and take a picture or two and I easily lost 60 - 90 seconds taking bathroom breaks.

My take away on this though was that I finished strong.  While my last 2 miles are pretty slow they weren't really in the death march category and it didn't really hit me until the final 2 miles.  I sort of wish the course started flat and progressively went downhill.

I would definitely carry my own supplies.  Nuun is a (mostly) carbohydrate-free drink and the gels didn't come until mile 18.  I saw a number of people bonking and I suspect it was from a lack of carbs.  I wound up going through 3 gels and most of my Powerade.  The volunteers were spot on, enthusiastic.

The mile markers (most of which were visible) were pretty much spot on throughout the race.  Although the stretch from 26 to the finish was definitely long.

For the price, the race is expensive.  I paid over $150 for the race (about a month before registration closed), making it one of the most expensive races I've ever done.  I suspect a lot of the cost is for the park service and buses.  I hate to say it, but I sort of expected more for the price.

I loved the course -- there are so many stellar views and I wouldn't hesitate to recommend this race to those wanting to conquer Colorado and have a PR-worthy course.
Posted by Eddie Gaul at 5:07 PM