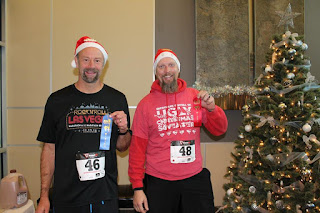 
I am always looking for an excuse to get out of town and heading to Elko Nevada for fun, food and entertainment is always pretty high on my list.  Double it with a low-key 5K and I am good to go.

Normally I don't travel that far for short races, but I didn't have anything else planned for the weekend. With some heavily discounted hotel rooms for the Red Lion Hotel and Casino, I figured it would be worth the 250 mile drive.


I know Elko pretty well. Despite living 3.5 hours away (via car) I've done many a run through the backstreets of the downtown area.  I've explored just about every residential street and know the lay of the land.

Going in, I figured the Ugly Christmas Sweater 5K was going to be a low key race.  Elko is pretty much out in the middle of nowhere and compound that with the fact that Nevadans don't generally run, I knew this would be a lightly attended race.

So around 1pm I stood behind the Elko County Courthouse with about 50 other people and started with what will likely be my last 5K of 2015. 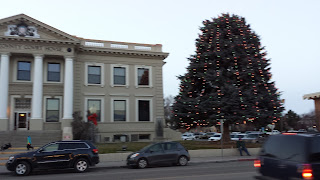 The race starts uphill almost immediately.  Luckily it is short lived, but it is enough to make you start sucking wind.  I had had a fairly large breakfast that had wrapped up at 10AM and the omelette I had was still working its way through my system. I felt heavy.

I was about in 6th place overall when the race started and I slowly worked my way past a few mid teen females.  I glommed onto a young boy of about 12 who's feet were slapping against the pavement.  Anytime I tried to pass him, he'd accelerate to match or exceed my pace.  He was pretty solid and eventually after another surge I managed to leave him behind.

I crossed the mile 1 marker with him in about 7:46 though.  My stomach was not happy and I was really regretting not eating something more quickly digestible.

Mile 2 had some downhills and throughout the race I could see a female and a male leading the way.  They were duking it out while I was a good 100 yards (give or take) behind them.  Eventually the girl broke free of him and I was slowly reeling in the other guy.

By the time I finished with mile 2 I was really hurting.  Part of me wanted to lay it all on the line to try and pass the guy (there was no way I was going to hunt down the girl) but my stomach was just "full".  Compound this with the fact that I was running at about 5000 feet of elevation made it really hard to muster up the energy.

Just as I got to mile 2.25 I noticed that the two leaders were not in sight.  The course had been laid out with flags and arrows.  If you saw a flag, you were going the right way.  If you saw a turn arrow, it meant turn.

I had studied the course beforehand and knew that I was supposed to take Court Street all the way into the finish.  The two leaders had taken a right turn where a flag was, but there was no turn arrow.

The girl had gone a full block north while the guy had followed here for half a block.  Both of them were looking at each other wondering if they had gone the right way.  I saw them and waved / half yelled that the finish line was down Court Street (I hope).

I kept running and sure enough another flag appeared to let me know I was on the right track.  I looked behind me and the young man was no where in sight but the woman was coming after me at full charge.

I pushed it and while I felt guilty about beating her by a second, she clearly would have / should have won.  The young man who might've been the first male was 30 seconds behind me.

I hate when things like this happen and immediately after crossing the finish line I told the race director that the two people behind me were the true winners.  We had a discussion and the young man acquiesced much to my protestations.  In all honesty, part of the rules of the race is always knowing the course. I really hated to win like that however so I really didn't feel justified.  It would be one thing if I had caught the young man down the stretch and out sprinted him but this just felt off.

I liked the course.  It was mostly residential and it wasn't closed to traffic.  Luckily traffic in Elko is pretty tame and the streets were wide.  There were some patches of ice, but I never really worried about losing my footing. 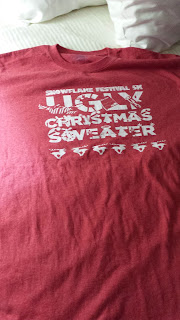 Other than the marker at mile 2.25 I knew exactly where to go and they did a good job in laying out the course.

I got a cotton t-shirt, a ribbon for winning my age group, and of course a really nice wood plaque to hang medals on for the first place overall win.  Post race snacks included chocolate milk, oranges, cookies and water.

The price was very reasonable too -- $25 and I registered two days before the event took place.

Performance-wise, I did really well in this race.  Despite having a full gut, I managed to finish pretty well.  It was certainly a better race time-wise than the South Davis Thanksgiving Day race and it gives credence in me doing more speed work. 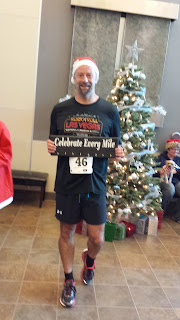 This was also the first time I finished first overall in a race.  I've come in second a time or two, but never first.  I really hate to take credit for an overall win given the circumstances that I won under and as I was crossing the finish line I thought about just stopped before it and letting the other people pass me.

Sadly, this race is going to be discontinued and likely won't come back next year.  With only 50 runners, it probably doesn't make sense to the organizers.  Hopefully they'll reconsider as this was one of the draws for me to visit Elko and I'd likely return again to run it.