Well this week was finally a "rest" week.  Some of it for good reason.  About a week ago I was on a run and saw a chunk of wood / mulch in middle of the bike trail. Being the civic minded person that I am, and fearing another runner might trip on it, I kicked it to the side of the trail in passing.

Not a big deal right?

The problem was that this piece was unexpectedly harder and thicker.  After I kicked it, I was like "That hurt!"  I kept going and eventually the pain subsided.

2 days later (or so) my foot, at exactly the same point started to really hurt.  Like a dull, non-stop ache.  Fearing a stress fracture, I opted to go to the doctors -- which I rarely do.  He examined me and didn't suspect a fracture, but told me to take it easy, hit it with some anti-inflamatories and give it a few more days.

A week later (as of writing this) it is about 80% better.  I can definitely run on it, but it still has a dull ache from time to time.

Couple this with the fact that about 10 - 15 days ago I slipped while running on a fiberglass bridge that they have on the bike trail.  It was a result of the year's first frost and as I was rounding a corner on it, my feet went out from under me and I landed shoulder first on the ground.  I was able to dust myself off but since then my shoulder has NOT been happy.  This includes having some pinched nerves that run down the length of my left arm.  It is exacerbated by sitting.... which is what I do for a living.

So I've been injured but it isn't an actual running injury.

Shari and I saw the Pam Tillis / Lorrie Morgan show in Wendover on Friday night.  As usual, on Saturday I opted to hit the trails outside of town.  It was a beautiful, but chilly morning for a run.  I finally did spot another living thing on the trail:  a jack rabbit!  I think other than some ATVers and a dog walker, I've never seen anything out on the trail.

The trail is really challenging to run on.  There aren't many flat sections and just to get to the pinnacle of the trail is a good 500 - 1000 climb from town (broken up over a few miles).  As usual, I got a bunch of pictures: 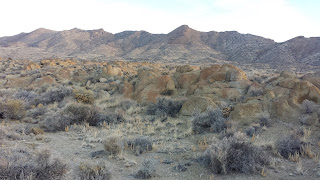 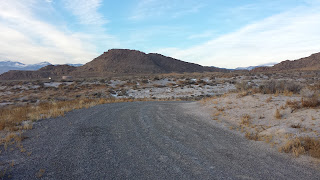 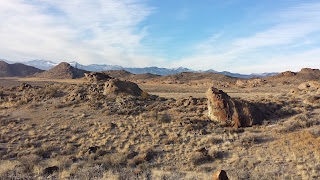 Jonesing for a Race

Unfortunately (or fortunately depending upon how you look at it) there aren't many races coming up.  Utah winters are largely unpredictable so much like the midwest they do tend to try up this time of year.

Either way, I have the spring to look forward to and the cooler weather certainly makes it more convenient for running (I much prefer cold weather running over hot).