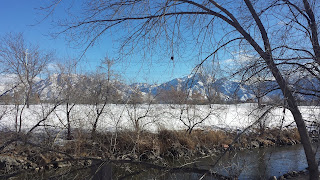 
Arizona Desert Classic:  I felt I ran really well here.  Course wasn't necessarily "fast" but it felt good. Was really happy I did this one.

Sand Hollow Marathon:  Beautiful but died in the heat and hills at the end.  Could've / should've done better.

Ogden Marathon: Kicked butt!  First sub 4:00 hour marathon in a while. Would've been faster if I hadn't swallowed a bug.  Perfect conditions for me.

Governor's Cup:  Wilted in the heat.  Loved the race but had that medical issue at the end.

Jackson Hole: Perfect running conditions.  Course was long (to me) and I am sure the altitude took a lot out of me.  Loved the race though.

Monument Marathon: Great first half.  The hills and heat killed me in the second half.  Beautiful race though

Duke City Marathon: Loved the way I ran this one.  My time may not have been spectacular but all things considered I ran even splits and really only faltered on the last mile or two.

Las Vegas: Note to self: don't eat a lot in the days before a marathon.  It will come to haunt you. Not the way I wanted to wrap up the year.


Reflections on the Entire Year

Thanks to a super mild winter and spring, I was able to log a TON of miles.  I had made a challenge with myself to attempt to run at least 2000 miles this year.  Normally I run around 1800 - 1900 but I never cracked the 2000 mile barrier.

This year, I not only cracked it, I demolished it.

Normally, when I start running as many miles as I do I break down.  I get injured is usually what happens.  This year that really didn't happen.  Sure I had a minor bout of something, but I didn't wind up with anything that took me out longer than 3 days.

So did all the volume help?
Yes and no.  I had pretty good endurance throughout the year and I could almost jump into a marathon on any given weekend.  I also managed to qualify for the marathon maniacs as well (level 3) given the amount of marathons I ran in a calendar year (if you count 365 days, then I ran 9).

But on the flip side, it did make my legs a bit on the tired side.  I had a hard time, particularly in the summer, mustering up the energy and strength to do the quality workouts.  More often then not, my runs were at an easy or medium pace which don't lend themselves to making one faster.

I should mention too that my training runs were pretty much limited to the bike trail.  To say that I know just about every nook, crack and cranny of the paved path might be an understatement.

That being said, however.  I had a great time doing as many races I did.  I tried to pair a lot of my destination races with doing fun things: visiting the hot springs, eating some place new, or simply seeing a new city.  Races were the excuse to try new things.  It also got me more invigorated about running and racing and seeing what levels I could perform at.