Well another mild week in terms of total volume.  The Legacy Half Marathon last Friday night pretty much wiped me out and I wasn't feeling "good" until Monday.  These half marathons take more recovery time  these days.

On Wednesday I thought about running, but I just felt absolutely drained.  Whether it was from Tuesday's hike, stress from work, or a mysterious health reason I am not sure.  Some days, I just come home and physically feel wiped out.  I've had it on my "intentions list" to make a doctors appointment but I get distracted from making the actual call (actually I did call but they were already closed).  To be honest, I am also less than thrilled with going to the doctors.  I really want to be running more and harder but physically of late, I am tired.  Granted it could also be the heat -- as it has been in the mid to upper 90's all week. I just want to rule out anything medically at this point.

I have noticed and it was clearly evident in this weekend's Glow 10K that more and more women are now racing.  I don't have a problem with it at all.  When I first started racing in 2004, generally it was 60% men, 40% women.  Now it has completely flipped and in some cases the women outnumber men 2 to 1.  It was blatantly evident at the Glow 10K when I saw that there were about a dozen male finishers compared to about 50+ women finishers.

I have no problems with this trend and just find it interesting.  I think running appeals to people on so many levels and it is great to see more and more people racing and trying to improve themselves.  I just hate getting "chicked" though.

The selection of races for this coming weekend look a bit ho-hum.  I think part of it, is that many races are being held on Pioneer Day which is a state holiday of sorts in Utah.  There are a couple of halves as well as a full on Thursday.  I would love to run the Farmington Handcart Half again, but I'll be in Wendover that morning.

Right now, I need to study the running site again, but I am leaning towards doing the Morgan Valley Half Marathon in Morgan, Utah.  Morgan has been on my list for a while to visit, as it is all by itself in the north eastern section of the state and I am told it is pretty.  Sadly, they want $80 for the race, which is just pricey in my opinion.  I know the popularity of half marathons is soaring, but for me, it takes a hit when I have to cough up a serious chunk of change to get into it.

Photo of the week:

About a mile from my house, here is a lengthy stretch of the bike trail that goes under the 215 Belt way.  I know I am on the homestretch when I hit this.  However, if you walk under the bridge while gabbing on a cell phone, you will disconnect. 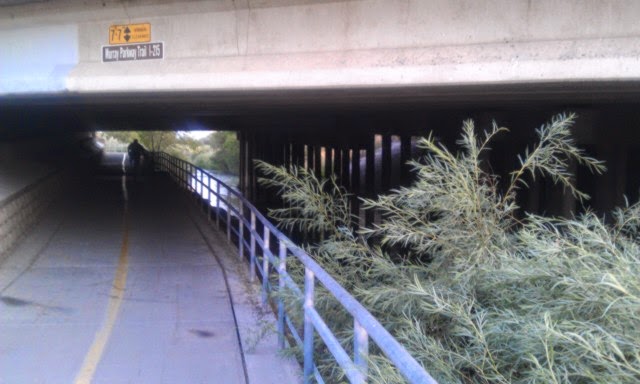