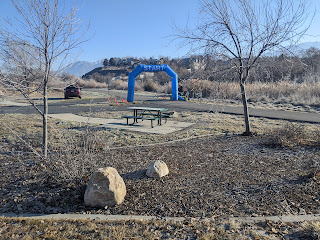 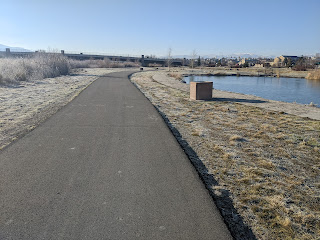 In early winter I got a special deal from the City of South Jordan recreation department for a package deal of 5K races --  basically a weekly virtual one (mostly for participation points) and for a brand spanking new December and January race.  For $35, I was able to register for this race and the Santa Run.
It was a pretty nice deal all things considered: 2 t-shirts, 3 medals, and 2 races.  Plus the races were two cities south of me.  How could a self-described race junkie pass this up?
I knew going in that the races were fairly low frills.  For the price I was paying I wasn't expecting a lot -- especially considering all that I was getting.  But these would definitely keep me occupied this winter and I could use these as tune up events for the big spring season. 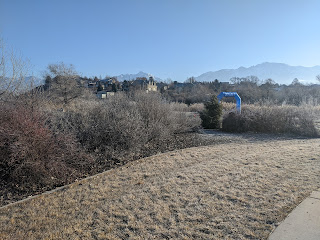 I woke up to a chilly Sunday morning.  It was about 29F degrees when I reached the South Jordan fishing ponds.  There wasn't much of a breeze but it was definitely cold.  Fortunately, this race starts at 10 AM so we had already passed through the coldest part of the morning.  Also, the snow has melted and the Jordan River Parkway -- where the race was held -- was clear of snow and ice.
I got there a little later than I had wanted but I managed to get my bib, lace up and get in a warm-up.  I expected it to be cold but once I warmed up, I went with heavy gloves, t-shirt, skullcap hat, and shorts.  This turned out to be the best decision for me and I was completely comfortable for the race. 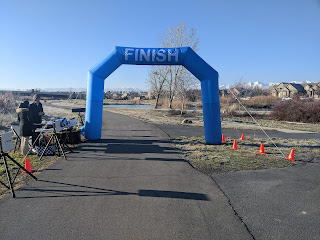 The race started at 10 AM and about a 100 runners took off south along the parkway.  The start line was congested but I was able to get around the people that had lined up in the front and settled into a comfortable pace.
I had studied the course a little before hand and knew that in the first mile or so we'd have a decent hill, so I didn't want to go out too fast.  Also, I was kicking myself for not getting in a longer warm-up.  I felt good but I felt like my heart rate rocketed from resting to race pace too quickly.
It was hard to gauge my pace.  The sun was in my eyes and I had a difficult time reading my Garmin but I was working with a pack of runners that were running the same pace as I was.
We cross over the bridge and onto the east side of the Jordan River before heading (briefly) south and jumping into a well to do neighborhood.  Rounding a corner, I spotted the dreaded first mile hill.  It was a doozy too.
My speedy case suddenly become a bit of a shuffle.  I maintained my form and I made my way up the hill.  What was likely to be a 7:45-ish first mile turned into an 8:15.
The neighborhood running route was interesting.  I hadn't really looked at much of the details of this part of the race and in hindsight I should've.  It would've helped me prepare for some of the turns and a better sense of where I needed to go.
Fortunately, most of the turns were obvious:  they either had a volunteer pointing you to turn or race arrows.
The 4 of us were working together and taking turns passing each other.  It was reassuring when I could use them to figure out where the next turn was.  Eventually I passed 2 of them as we settled into mile 2.
I still felt good but the hills were taking their toll on me.  We'd get some nice downhill stretches, only to be following by an uphill.  Other than the first mile hill, though, these weren't too awful.
I really got discouraged though when I made a wrong turn.  The general presumption is to never turn unless told to.  We were running on a straight away and we knew we'd have to run south at some point and a road was leading south - but there were no arrows or volunteers telling us to turn.  The road ahead veered south so I made the presumption that we were to continue running straight.
It was uphill and I figured this would be it of the hills and we'd get the sweet downhills back to the finish line. Unfortunately about half way up the hill, me and the lead runner saw that the "straight" road led to a cul-de-sac where it dead ended.  Damn!
I got a little flustered here.  I didn't really lose much of a position in the race but I had expended a lot of energy to climb at least a bit of this hill.  While this race wasn't an "A" level race for me, it was an event and I was trying hard.  I'd have to admit that I sort of checked out -- at least a little.
Fortunately we got back on track and crossing mile 2, I saw a 8:07 flash on my Garmin.  Still not where I wanted to be, but given the up and down nature of the run, I was kind of okay with it.
The third mile had us return back to the bike trail.  I had run a bit of this route before the race so I knew where to turn and we could see the finish line from time to time.  We just had to make a big loop around it.  It was so hard running along the sidewalk and looking over your right shoulder and seeing the finish line waiting there.
Finally the final turns reached us (I think collectively we were worried if they had forgotten to put the race arrows or a volunteer at the proper turning point).   It was obvious -- a pink race arrow pointed us back to the main bike trail and towards the finish line.
I was pretty dead at this point and I figured with the wrong turn and the hills that my time would be fairly ordinary.  The other 3 runners I was working with had put some ground on me and there wasn't a soul behind me. 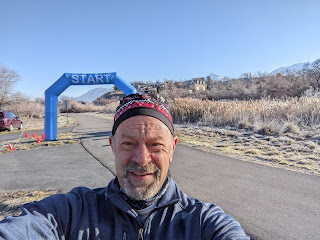 I crossed the finish line in 24:18 on my Garmin and to be honest, I was pretty happy with it.  The Garmin did measure the course a bit short, but MapMyRun had it at 3.15 and a few other Strava users had it range from 3.09 to 3.01.
I felt I had run pretty well though.  This was a fairly challenging course in that it was hilly -- with over 125 feet of elevation climb.  It doesn't sound like much but over 3 simple miles, it added up.  I also managed to negative split the race, pulling in a very fast final mile. 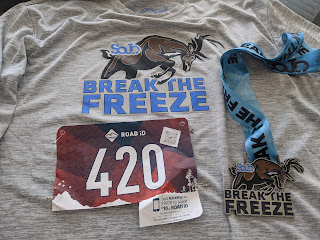 The race was a bargain. I got a nice shirt and the medal is also very nice.  It is heavy and nicely designed.  The shirt isn't polyester but is a sport blend and something that I'd wear for training runs.  There is definitely something different about it over the polyester / cotton blends.
I liked the course actually.  It was a nice mix of residential and bike trail running.  While it wasn't the most scenic 5K I've ever run; it was enjoyable.
Post race refreshments were simply water.  And I think only the first place overall runners got an award.  I wish there had been an age group thing but a race this cheap and this lightly attended -- I wasn't expecting much.
There aren't many races in January but I had a lot of fun at this one.  I'd likely do it again if the same deal is presented next year.  Also, I'll definitely remember that missed turn -- which probably cost me 10 - 20 seconds.
Posted by Eddie Gaul at 9:26 AM