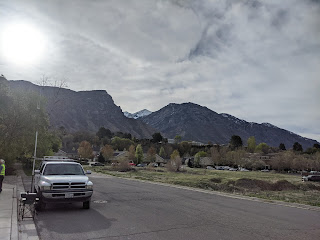 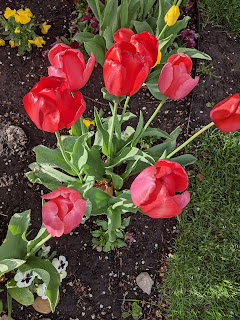 Just about every year the Provo City 5K / Half Marathon appears on my race calendar and I always forget about it.  Usually May it is race compacted month, where there are so many things going on, that it just simply falls off my radar.
With Covid-19 still in effect, there are less races and a friend of mine happened to have an extra coupon which brought the price of the race down to virtually nothing.
Normally, I'd opt to do the half marathon, but the half marathon involved going down to Provo on Friday, picking up my bib and then arriving early the next day to jump on a bus to do the race.  Just too much.  So the simplest (and cheapest) thing to do was to do the 5K.  My training has been more suitable for the 5K regardless, so I was happy with that. 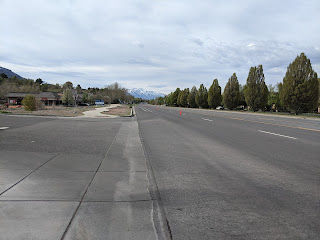 I rolled in around 8:15 AM for what I thought was a 9 AM start.  I was one of the first to the site and the organizers hadn't even set up yet.  Turns out the race was to start at 9:30 AM.
Things were pretty disorganized and after a while I did manage to get my bib, but clearly they weren't going to start on time.  It made my warm-up sort of haphazard and as time ticked past 9:30, I was wondering if this was going to turn into a fun run.
Fortunately the race started not soon after 9:30 and we were off.
The course was quite simple.  Start on a small offshoot to the main drag in Provo, hang a left and run until you hit the finish line.  One turn -- that's it.
I got off to a decent start.  Looking at previous year's results I knew I had a shot at an age group award and I didn't see that many guys in my age group.  There was a competitive feel in the air as I was approached by several people asking what my age was.
I had studied the course profile before running and I knew the first mile would see a climb.  You can sort of see it from the picture above.  After that it was going to be a sweet downhill to the finish.
I started off somewhat cautiously but I felt good.  I quickly pulled away from many of the runners and settled into a decent pace.  Occasionally, I would look at my Garmin and I felt that I could hold a sub 8 minute mile and hopefully let loose with the next 2.
I was astounded to hit the first mile in 7:30.  And I had put the only hill in the race in the rear view mirror.  I felt good -- still but I knew I was going to pay a price for my aggressive first mile.
There were a few half marathoners that were trickling in and I quickly overtook them. In fact, it was a little hard at times to determine who was running the 5K and who was running the half.
I flew through the only aid station and I was so focused on the race that I wasn't really paying too much attention to my surroundings.  Suffice to say it wasn't too interesting.  It was a major, coned off road that was lined with oil change places, fast food restaurants and other Main Street type of operations.  I did pass by the fabled BYU but I hardly noticed.
Mile 2 flashed on my Garmin with a split of 7:34.  Could I actually PR here? 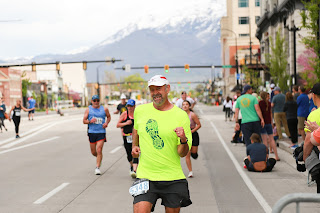 I was definitely feeling it at this point and there wasn't much left.  I was sweating profusely and of course my stomach was in knots.  I kept focusing on my form and just putting one foot in front of the next.  I was trying to chase down a woman and a man in front of me but there clearly wasn't anyone behind me.
It was also at this point that I saw the flashing lights of the fire truck and I could make out the finish line in the distance.  It just seemed to take an eternity to get there.
The business thorough faire quickly got older.  The race would finish in downtown Provo which is lined with some early 20th century buildings.  At this point too the course was flat, so I was running under my own power.
My Garmin buzzed at 3 miles with another delicious 7:45 mile.  Despite the pain I was feeling, I was thrilled to crack 8 minute miles for a 5K.  It's been a LONG time since I've done that.  However, the finish line was *still* a good quarter mile away.  Darn it.... The course was definitely going to be long and every step I took was just hurting.
I glanced at my watch when I hit 3.10 miles -- doing it in 23:35.  Fabulous, a new PR for me.   I still had to run an additional .11 miles to cross under the finish line with a time of 24:19. 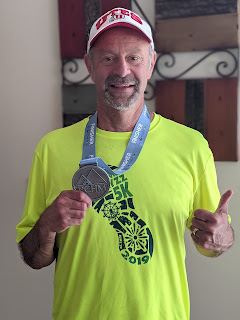 I was walking on air when I finished.  What a fantastic time -- even with the long course, I had done really well.  Unfortunately, my allergies did kick in and after grabbing my medal and some water I had to find a quiet corner to clear my throat.  I hate that feeling.  Fortunately I didn't get sick but for a while there it wasn't looking pretty.
I walked off the nausea and grabbed a banana and they were passing out some other premium sports drink at the finish (Body Armor).  I wound up hanging around socializing with a TON of people I knew for a half hour before they announced awards. 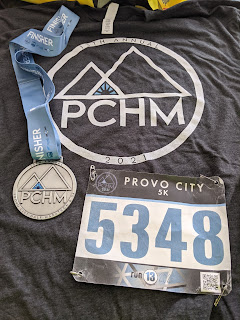 Despite the website's promise that there were age group awards -- there clearly weren't any.  In fact, a lot of the results had "Unknown Participant" in the results, so I don't even know where I placed.  I have a feeling that for the 5K people were just handed bibs with a chip.  So I can't even really claim it on Athlinks.com (I did submit a request ticket to get it adjusted).
The medal on this race was heavy-duty though.  I paid around $12 for this race with the massive savings coupon I got so I can't really complain.  The shirt was nicely designed -- front and back -- but it isn't the 100% polyester.  The cotton material is definitely sporty but I like the 100% polyester ones.
The finish line definitely had a party atmosphere.  Music, a host, and a massive finish chute.  There also was a farmer's market and vendors, so it had a nice vibe. I really wish I had brought my camera to take some photos.  Very cool finish line experience.
There were supposed to be shuttles to take you back 3.1 miles to your car, but alas someone didn't get the memo.  After realizing that I'd be in for a long wait for volunteers to drive you back to your car, I just opted to run it back.  Shuffling uphill 3.1 miles back to your car after punishing yourself with a hardcore 5K wasn't my idea of fun.  But it wasn't all that bad and I got to enjoy a bit of the scenery and cheer on some of half marathoners.
Overall, I got a nice race for what I paid for.  If I had paid full price, though, I think I would've been disappointed.  The race results are a mess and there was a hint of age group awards, but clearly there were none.  Also the race getting started on time and bib assignments just weren't up to par.
However, I really enjoyed the vibe and the course -- it was fast.  The shirt was nice too and again, the medal is definitely up a notch from typical 5K race medals.
Performance wise, this was one of my best races in a very long time. 24 hours later, I am still excited with my performance.  Definitely gives me a strong indication that my training is going as planned.
Posted by Eddie Gaul at 4:29 PM