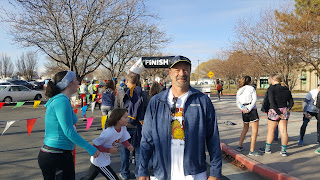 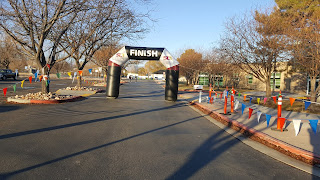 It's been a long time since I've gotten a great deal on a race.  And I've been at it for a long time.  But I was looking for a race to do this weekend and was asking around.  A friend of mine sent me a link to a $10 race!!! With races costing upwards of $25 - $30, I began to wonder if this was too good to be true.

Or worse, a poorly run race with little to no support.

Either way, I was looking for a race and this was pretty much the only gig in town.  Plus, it was less than 4 miles away from home. 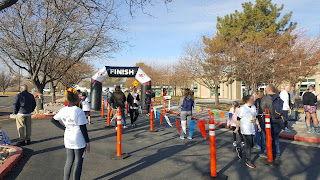 The race started at 9 AM and I rolling in just after 8.  I was expecting a fiasco grabbing my bib, but again, easy peasy and well run.

To top things off the race was headquartered at the Gene Fullmer Recreation Center, so we had some place warm to hang out before the race -- as well as clean bathrooms.

It was a nice recreation center, with a pool, weight room, etc.  Certainly one I'd consider joining. 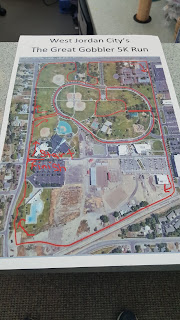 Around 8:30 I did my warm-up and tried to figure out the course.  I had studied the course the day before and was a little worried on account that it had a TON of turns.  Would a $10 5K send me wandering the streets of West Jordan?  I would hope not.

I discovered that the course, to some extent, was similar to the West Jordan Green Eggs and Ham 5K I ran last summer.  I actually kind of knew the course!

The race started around 9 AM -- again, unexpected.  These cheaper 5Ks, can sort of drift later and we were off.

I had warmed up but getting that first mile in felt like I was revving up a cold engine.  It has been a while since I had pushed the pace and I was really hurting.

The first mile took us into the West Jordan park and I was immediately reminded of memories of having done the Green Eggs race last summer.  I knew exactly where I was going -- and I wasn't in the lead, so I just followed the lead group.

I am happy to report I didn't get detoured or lost at all.  The had a police motorcycle leading the way and volunteers were at appropriate junctions. 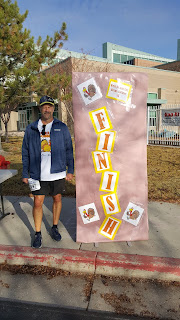 That first mile seemed to take forever and I was sort of stunned to see a 7:45 roll up on my Garmin.  Not too bad.  Could I push it for the second mile?

The course's miles weren't marked in any way and part of me wondered if the course would wind up short or long.  We had pretty much finished with the park at that point and were soon on a quiet service road of some sort behind the recreation center.  There was no one behind me and one lone runner in front of me.

My goal was to keep up with him, as he appeared to maybe be in my age group.

I steadfastly dogged him as we ran in stride.  I'd make some ground on him and he'd sniff me out and push on his accelerator and I'd dial it back.  He did appear to be in my age group and with 10 year age increments for awards, I wanted to stay close.

We eventually turned a corner and were on a rough gravely road.  Footing wasn't bad by any means but I wasn't getting any pounce.  I was anywhere from 5 to 10 yards behind my target.  I could tell both of us were hurting.

I checked my Garmin and while I could see the recreation center, I sort of sensed that the course might be long.  It just seemed we were so far away with less than a third of a mile to go.

Finally we exited the dirt road and jumped onto the unforgiving concrete.  Every time I gained ground, he met my advance and pushed it forward.  Looks like it was gonna be a sprint.

We finally turned the final corner and had less than 50 yards to go to the finish line.  Here was my chance and I broke into a sprint.  This guy clearly had another gear and despite my frantic efforts I couldn't catch him.  There was a chance I might've but I just didn't have the guts to go crashing through the finish line. 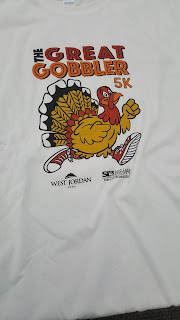 
They haven't posted the results as of yet, but I figure I was 2 - 3 seconds behind the other runner.  And you know what?  He was in my age group.  I was 3rd -- he 2nd.  The race wasn't chip timed so hard to tell exactly how much apart we were either.

I walked off the efforts of the run and socialized a bit, taking a sip of water I had brought.  They had bananas, bagels, and water to drink.  Pretty standard fare for a low budget 5K.

Awards were done promptly as well.  The race directors really had their stuff together on this one -- from start to finish.

I was super happy to win 3rd in my age group and nab a medal as well as some pasta and sauce.  They had a lot of prizes to pick from, all under $5 or so. 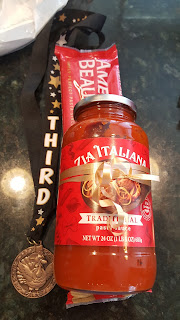 Performance-wise, I did okay.  25:ish has roughly been my times for a 5K of a late, so again, just average.  I did talk to some people who's Garmin's measured the race at 3.11.  So I suspect it was a legit 5K.

I did enjoy myself.  I was surprised from start to finish with everything.  For $10, got a timed 5K race (with police escort), an age group award and prize, a swag bag and a cool t-shirt (albeit it is cotton). I'd definitely do this race again next year.
Posted by Eddie Gaul at 5:03 PM