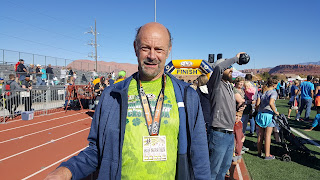 
One of the most popular November races in the Utah area is the Snow Canyon half marathon.  It is located in St George, where the weather tends to be about 15 degrees warmer than the northern part of the state.  Being that the Salt Lake area was getting its first taste of colder weather, it was refreshing to head down and "warm up".

The Snow Canyon race is also popular in the fact that the meat of the race is held on the service road through the Snow Canyon State Park.  The park is a popular destination for visitors in the area as it offers stunning white, sand and red rock formations, climbing and hiking opportunities.  It is just a beautiful area to visit.

Also the race bills itself as downhill and fast.  It isn't a crazy drop and I've certainly ran faster downhill races but this one was nice in the fact that it didn't burn my quads out like other ones I have done.

Either way, I was looking for something to do and decided to make it a long weekend by including this race.  Also, this race normally is the week before the Las Vegas Rock 'N Roll marathon and hence I am generally reluctant to do it just on account of logistics.  This race was scheduled 2 weeks before my annual Vegas jaunt so I decided to knock this one off my bucket list. 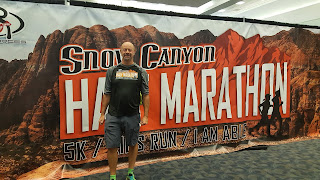 Packet pickup was held on Friday.  The race allows you to pick up your bib on race morning, but I took half a day from work and got down there by 3 PM.  I love their venue for packet pick-up.  It is clean, spacious. and I actually knew a vendor or two.  I was in and out in about 15 minutes.

I did NOT sleep well before this race.  I normally don't while on destination races.  Sleeping in a different bed, wondering if my alarm is going to go off and worrying about all the details of finding parking and the race's location kept me tossing and turning most of the night.  I think I may have slept about 3 - 4 hours and was not well rested when I woke up at 5 AM.

I had my re-race food (Wheaties) and a couple cups of hot tea (for the caffeine) and packed my gear.  I brought a ton of warm gear too -- not for running but for the long wait.  And boy I am glad I went with the heavier stuff.

I drove about 15 minutes to Snow Canyon High School and easily found good parking.  I was there at about 6:15.  The buses loading period was from 6 AM until 7 AM with urgent warnings of "get there early".  With the race starting at 8:30 and probably a 20 minute bus ride, I loafed in my car as long as I dared before jumping onto a school bus at just a hair over 6:30.

The bus ride seemed to take forever as it headed out of town and into the outskirts of St George.  I couldn't really tell where we were going but the houses gave way to barren desert and grassy fields.  We were dumped off at a Red Mountain Trailhead which doesn't have a lot of amenities

It was cold... I am so glad I brought my heavy gear for the roughly 80 minute wait.  I found a clump of dirt / hay to sit in (the parking lot had no pavement) and just sat there shivering and trying to stay warm.  I had my running gear on, plus tights, a sweat shirt and a warm running jacket on and I was still cold.  My toes were frozen by the start of the race.

Fortunately the time went by quickly and with about 12 minutes to spare, I made about a quarter mile walk to the starting line.  Along the way I started to take off my clothes -- reluctantly, as it was still chilly.  But I knew as soon as I started running I'd be fine. 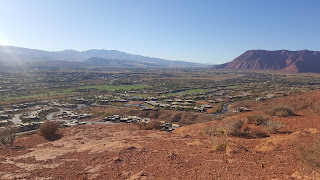 Ultimately, I went with cheapo gloves, shorts, a hat and a long-sleeved t-shirt.  My only mistake was wearing a black shirt, which seemed to attract the heat of the sun as the day warmed up.

The first two miles was mostly run to get some feeling back in my toes.  I hit the paces I wanted to, about 8:30.  It was run along the highway and we had an entire lane dedicated to ourselves.  There were a slew of runners so I was never running by myself and I settled somewhere near the 1:50 pacer and the 1:55 pacer.

I felt pretty good despite not sleeping well but I could feel a little fatigue in my legs from last week's half marathon.

The first 7 miles of the race are primarily downhill and just shy of the 5K mark we entered into the Snow Canyon State Park area.

At the state park, the run gets a lot more scenic and pretty.  I didn't take any photos of the race while running (I was attempting to race the course and not carrying a phone or any hydration).

The state park is known for it's beautiful white and red rock formations.  It is a popular tourist attraction and normally costs about $7 to enter.  Today, I had free entry to at least run down the service road.

It was a joy to run down the road surrounded by natural beauty and the cool / pleasant morning air.  Also it helped that the course was downhill, so I was knocking off low 8 minute miles.  No wonder this course boasted that people could achieve some fast times.

I worried about going too fast.  I was about 30 seconds per mile faster than I'd like to be, but with the downhills, I figured I'd just go with it.  However, the fatigue in my legs was building up.  I had a feeling I was going to pay for it in the latter stages of the race.

After exiting the canyon, the course winds its way through the neighborhoods of St. George.  We were jumping onto bike trails, sidewalks, and finally the road for the final 4 miles or so.

My Garmin output leads one to believe it was a gentle downhill but in reality there were a bunch of "micro hills".  At this point, my legs were dead and I was feeling listless.  The course was still interesting to me, but I wanted to be done.  I couldn't make up my mind if I was carb-depleted, dehydrated, or what.  Maybe it was a little bit of both.

It was disheartening to be slowly swallowed up by runners as they passed me.  My once glorious 8:30-ish pace was creeping into the 9's and then humbling me into the 10's.

It was hard to enjoy this section of the course as we ran by chic desert house dwellings.  I was hurting and sort of wanted the race to end.  There wasn't much left in my legs and the downhill sections were clearly over with. 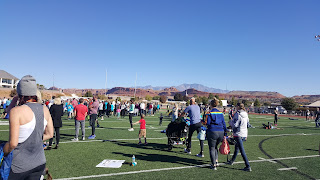 The final mile couldn't come any sooner as I shambled my way into the high school's parking lot.

I was greeted by a large group of cheering folks as I hustled under the St George Races blue and yellow arch with a decent time of 1:55.


I grabbed a medal as I walked on the high school's track towards the refreshments. I wasn't feeling that well and my stomach was sort of in a dizzy.  The temperature was definitely warmer but not insanely hot but I think a combination of being overly tired and slightly dehydrated had me feeling weak.

I grabbed some Gatorade (I think Endurance formula judging from the salty taste) and circled around waiting for everything to return to normal. 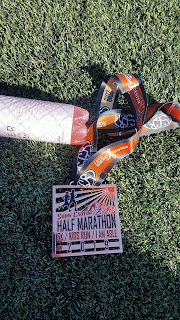 Post race refreshments were chocolate milk, muffins, and potato chips.  Once my stomach had settled down enough I was able to eat some of the food but it took a solid 15 minutes before I felt well.

The medal was a big one and well designed.  From top to bottom, I really enjoyed this race.  The shirt was well designed and high quality.  And I absolutely loved the course.  It was pretty in all aspects and despite the final 4 miles being a slog and less glamorous than Snow Canyon, it had its own charm as well.

I wish there was another aid station closer to the start.  The first one was at 4 miles and I think that sort of lead to a bit of dehydration.  There were amply stocked aid stations, however, roughly every 2 miles.

The course's mile markers were also way off.  The first 10 miles or so they were about .1 of a mile short.  Suddenly around mile 11 or 12 it was right on target.  Ultimately the course came in at 13.05 for me.

I loved this race.  Even writing this a few days later, I am still kind of on a "buzz" from my experience.  The course was fast, scenic, and well-organized.  From start to finish, I was happy with my race.  I just wish I had been a little more fresh for running, rather than having so much fatigue from last week's race.

Hopefully I can swing by next year.
Posted by Eddie Gaul at 8:45 AM