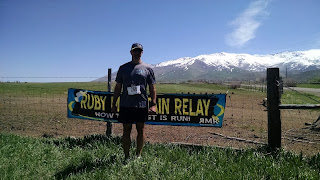 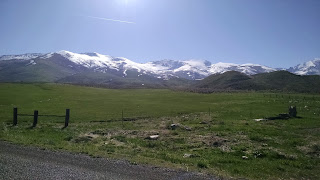 I've wanted to do this race for a very long time.  It has showed up in my race searches year after year, as I've done other Ruby Mountain Relay races and this one just never fit on my calendar.  It always seemed to collide with the Salt Lake Marathon.

This year I was really excited to see that they moved it after the marathon, and with nothing on the race calendar, I opted to cross this one off my list.

I am glad I did, because apparently this will be its final year of being run on account of low attendance.  Deeth Nevada is just a hard place to draw a lot of people. 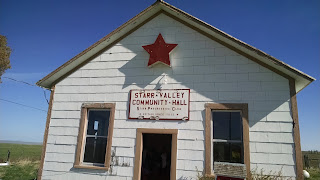 The race's headquarters was at the Starr Valley Community Center.  This was an ancient building, built in 1913 by the settlers in the area. Packet pickup was a snap on account that the race was very lightly attended.  I think they probably had about 50 - 60 people all together for the 5 and 10KM.

I had driven in from Wendover and with a 10 AM Pacific Time (Wendover is on mountain time) I was afforded the luxury of sleeping in and relaxing a bit.

The race ran along a rural road on Route 230 NV.  I have never driven the road, but it is basically a stretch of road that is an artery for the ranches.  It is very scenic with the eastern Humboldt Mountain range being the backdrop.

This race is also hilly!

I warmed up about 2 miles before the race, since I got there a good hour early.  I also wanted to give my cranky hamstring a chance to get loose and have some confidence that it was going to hold.  I had zero problems with it as I made my way north along Starr Valley road.  I don't think the cows in the area had ever seen a runner before, because they retreated the minute they saw me run by.

The race started promptly at 10 AM.  The first half a mile or so is fairly flat but the hills begin soon.

My breathing was actually pretty good despite running at 5500 elevation.  My goal was to run about 9:00 - 9:30's for the hilly section, get to the turn around and crush the final 2 miles.

I was a little disheartened to see my first mile come in at 9:20.  I felt like I was running a lot faster.

I was happy with my position though.  Several young women were ahead of me and no one my age was ahead of me.  While I didn't think I had a realistic shot at winning, I figured with a lightly attended race they might not go very deep for age group awards.

Mile 2 was more hilly than mile 1.  I made a mental note that I'd really enjoy tearing it up along this stretch on my way back.  While I was climbing, and the pace was painful, I did realize I had a slight tailwind.  Mentally it helped, but I also feared that it would hinder me on the way back.

I loved the course.  There was very little car traffic and I was more or less running solo.  It was so peaceful and surprisingly warm.  So many desert smells, and occasionally a babbling brook could be seen.  Just a very agrarian area.

Mile 3 had some downhill and I didn't even both to look at my pace.  Looking at it now, I am a bit shocked.  The tailwind I suspect really kicked in and I realized I was the second place male overall.

The one young man ahead of me had about a quarter mile lead.  And I felt like I had a chance of tracking him down because he looked like he was going to be sick and breathing hard.  Did he go out too hard?

The turnaround was a bit of a double whammy.  The wind hit me hard -- it had to be a good 20 mph wind.  Did I really have that much at my back?  It was crazy because it didn't seem that bad.  Also the steep hill that had propelled me to a fast mile 3 time needed to be climbed.

I looked behind me and there was no one really chasing me down, which gave me some solace as I shambled up the hill.  I couldn't wait to hit the mile 4 marker.  It just seemed to take forever.  I wasn't too surprised to see another 10 minute mile roll by. 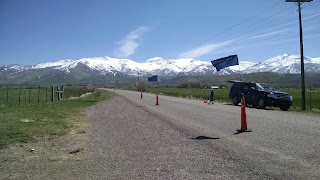 Finally at the top of the hill I could see the valley below and I had enough endurance to really start to pick up my pace.  While I had some head wind, it seemed a lot less and I was killing it with gravity's assistance.  There were probably only about 25 runners for the 10K and we were all supporting each other with cheers and encouragement.  That is one nice thing about out and back courses -- the camaraderie.

At mile 5, disaster struck.  My hamstring, which has been bothering me for the past month, let itself be known that I had pushed it too hard.  I glanced behind me and didn't see another soul except for a young man who was at mile 4.5 waiting to hand out water.  There was no one in sight.

I tried to see the lead male, but he was gone too.  My hopes of winning the race were dashed.  I dialed my pace back a bit.  I didn't want to hurt myself and I didn't need to push myself very hard at this point.  I am glad I listened.

Luckily the injury calmed down and definitely wasn't as bad as it was when I first injured it.  Sitting here, some hours later, I don't feel it at all.  So hopefully the hurt isn't going to derail my plans. 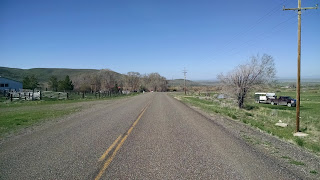 I crossed the finish line with little fanfare.  I grabbed a water and socialized with some of the other runners.  Believe it or not, a lot of people recognized me from other Elko-area races.  I drive 3+ hours for these races and it is nice to know I have connections in this town.

I walked off my hamstring issue and I realized I didn't seem to be in that bad of shape.  I wasn't too surprised with my time.  The course is challenging, the elevation / wind set me back and I haven't been training for speed for a while.  I've probably put on a few pounds too.  All of this took its toll on me.

I did thoroughly enjoy the race though.  I paid around $30 for it so it was quite cheap.

Age group awards were a simple ribbon.  The t-shirt was a cotton one that advertises the joy of running.  Not race specific.  I didn't expect much.  The race is lightly attended and is not billed as a big-time event.

I did talk to the race director afterwards and she told me that this would be the final year of the race.  She is from Salt Lake as well and the effort of putting on the race with just a low turn out wasn't worth it for her.

I am just happy I got an opportunity to run this race.  I would've regretted not having done it.