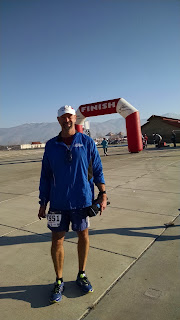 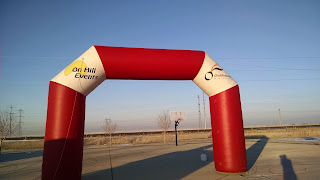 
I was definitely looking for a race to do this weekend.  It's been a whole 2(!) weeks since I raced and looking at the upcoming calendar I knew it was likely going to be a while.  So I was following the local race feed when I saw an impromptu 5K race popup.

The inaugural Independence Day December 5K is a race thrown together by Josher H at PhatJosh.com and race director extraordinaire Joseph C from OnHillEvents to help support a pair of runners through some difficult times.  100% of the proceeds went to the runners with a minimal entry fee of $10 (you could donate more).

The race was fairly close to my house and I decided that I wanted to race AND help out someone in need. 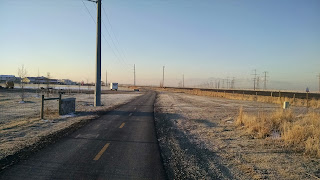 I rolled into the race site about an hour early.  Part of the deal was that the race offered recycled shirts (from other non-related races) from OnHillEvents.  It was more or less first come first serve so I was one of the first there. I managed to snag a Layton Marathon shirt.  I have run the race a few times but not that year's particular race so the shirt was new to me and not entirely undeserved.

We have a bit of a cold spell going on in northern Utah right now and the Saturday morning race was a balmy 24F when I got there.  Fortunately, there wasn't any wind.  Check-in was painless and I had my bib in under 30 seconds thanks to Josher, who was at the registration station.

The race started at the stroke of 9 and we headed north from Legacy Park along the Legacy Bike trail.

I've run along the Legacy Bike Trail a bunch of times as there are several races that use it.  It isn't the most exciting route, but for a 5K it works -- and best of all it is flat.  More or less it is your average, ordinary multi-use bike trail that hugs the Legacy freeway. 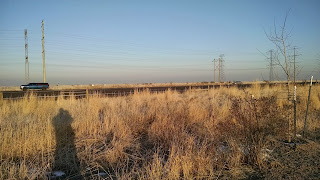 I was expecting to bottle necked for a bit, but luckily within a hundred yards I was able to maintain whatever pace I wanted to.

I wasn't sure what to expect with my performance.  I had done very little of a warm-up and on last night's "easy" run I felt sort of heavy and lethargic.  Luckily, once the race started my racing instinct kicked into gear.

The first mile felt good and it felt like I had just started before my Garmin buzzed at a 7:55 mile.  I was hoping to run 8:00's for the first 2 miles and then gut out whatever I had left.  So I was pretty happy and I felt good.

The lead pack was a ways a head of me but I was running well. Before I knew it, I spotted the turn around (they were serving warm water of all things...) and it measured exactly at 1.55 on my Garmin.

I really started to feel a little winded at 1.75 but with all my training geared towards longer distance stuff, I knew I had roughly 5 quarter miles left (I love to break down races in my head like that).  I only had one young woman pass me in the final stretch and I felt like I had at least another mile at that pace. 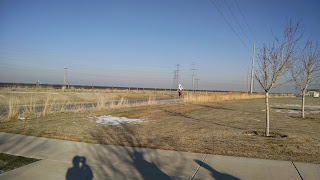 I really felt good after this race (despite a little bit of a creaky knee again).  I had hoped I would finish in sub 25 minutes and I did it!

I wound up talking to a few other runners and thanking the folks that put this together for a bit.  I was surprised to see that they also gave out awards.  Once again, the awards though were pick your own and from another race.  So I grabbed a 2012 Layton Marathon age group winner award (I came in 4th I think that year) since I won the 45 - 49 age group. 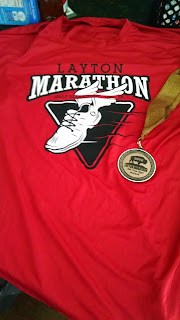 I really felt good about this race.  It was accurate and about as simple as it gets.  Also this race helped two people who are really in need.  Running has so many positive benefits and coming together as a community to help someone in their time of need makes it even better.