Well a pretty good week once again.  I am starting to do a few more quality workouts.  I am really trying to get faster.

When I started the 2 mile training route I had set out to run a mock 5K.  At 1.5 miles I was hurting bad.  I could've finished the 5K but the last mile would've been rough.  I stopped at 2 miles.  Since then, at least every week or so (and sometimes twice) I've been doing my 2 mile time trial.  Sometimes the wind is at my back, sometimes not.  But I try to crank it out at 5K pace.  I am trying to build up speed as well as building up mental strength to endure the pain of fast running.

My long run went reasonable well.  I don't think it went as well as the previous week.  It was a smidge warmer and I my legs were just not quite as responsive.  Also there was a little bit of doubt in my mind.  I had done 16 (17?) the previous week without any problems but for whatever reason, over 16 seems to be a bit of a mental hurdle for me.

I was pretty trashed the rest of the day -- exhausted physically -- but wired mentally thanks to an overload of caffeine.

Overall, it was a decent run and a definite confidence booster. 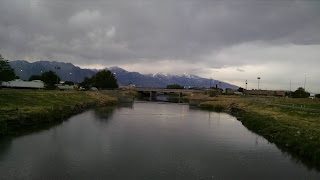 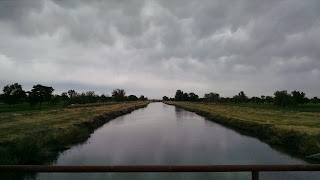 Also, during my long run I got to run against the Jordan River Marathon.  They had started on the southern end of the trail and started about 7 miles from the finish.  I ran north well before they started and by the time I was coming back, I was making contact with the lead runners.

It was interesting to see the wide range of athletes.  Those clearly running an excellent race and those on their last legs.  There was just a wide variety of people.  I tried to lend whatever support I could by cheering and making a fool of myself.  It made my long run that much more interesting and fun.

My knee is still holding up nicely.  I am doing my exercises religiously (my PT is pleased despite having graduated from physical therapy now for nearly a month) and wearing a wrap while running. It tends to be bothersome for a bit in the morning and the first quarter mile of just about every run.  After that, I don't feel it at all during the day.