Well this week was a strange one.  First off, after last week's 5K I need to get some distance in.  So I tore up the trail with a near 10 mile run.  I felt really good and it was just one of those fall days where I felt like I could run forever.

To avoid sitting around in the house all day, I wound up hiking up Wire Peak near the University.  It was a 2.25 mile hike uphill.  The ground temperatures were about 55 degrees but it was windy, a little bit of snow and freezing cold at the top.  It wasn't that great of a day for pictures, but it was a worthy bit of cross training.  By the time I was done with the hike, I had 15 miles in. 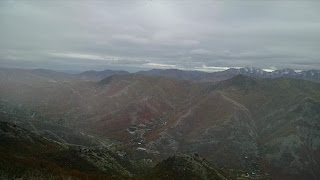 Most of the early part of the week I was in a bit of rehab.  The story on that soon.

My long run on Saturday went okay.  I was doing very well for the first 13 miles or so.  But when I started I felt like I just wasn't fresh feeling.  I was a little sore -- for whatever reason -- and there wasn't much spring in my step.

I should've slowed down, but I figured just go for it and see how long I could hold it.  Well, I hit that wall around mile 13.  What probably contributed to my demise was running with some Army recruits.  I saw them doing drills in the park and on my way back in, I caught them about 1/2 through their 5K (they were approaching me).

I had about 1/2 mile start on them and I noticeably picked up the pace.  Alas, the leader (who I think ran a low 18 5K) passed me with about a 100 yards to go.  It was fun and challenging pushing the pace mid long run.

I am closing in on the Vegas marathon.  I am nervous about it:

2) With the tragedy that has occurred there (any big marathon this worries me) they are changing a lot of aspects of the run. I believe it was going to be a repeat of last year's route.  But where the shooting took place is exactly where the starting line is.  So I had planned my hotel near the finish and start lines.  Now, they are potentially moving both locations.  Vegas looks small, but walking from the Bellagio to the Stratosphere (about 3 miles) is not my way of starting the marathon with fresh legs.

I suspect if I wasn't a legacy runner (9 years this year) I might consider bowing out.  We'll see what happens though.  I have faith it will work out. 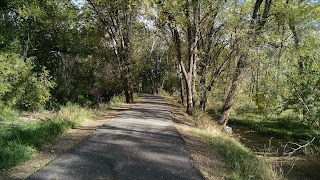 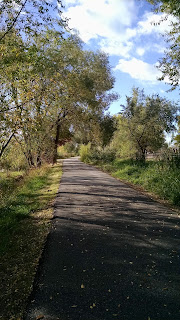 There is a bit of a story to this one.  A week before my very first marathon in 2009, I realized I had an ingrown toenail.  It hurt -- not a lot -- but the pain was present and uncomfortable.  I have had them before and they can make walking painful.  I had them dealt with in high school and was told I'd probably never have to deal with it again.

Either way, I went to a podiatrist a few days before my first marathon and the ouchie was in a touch spot, but he managed to use a buffer and get it so I could run with it as is.  I was told to come back after the marathon and he'd officially fix it.

Well the problem was after the marathon it no longer bothered me.  And my first experience getting it fixed (in high school) was not exactly an awesome experience.  And I have a phobia about people touching my feet.

So for the past 8 years I've been doing, do-it-yourself surgery at home.  And other than a brief visit to a podiatrist in 2013 for another issue (who offered to fix it then and there), I haven't really felt a need to do anything.

Well, fast forward to roughly the past month and I've found that the pain was getting worse and my home surgeries were no longer working.  So I finally went to the doctors (which I should've done during my knee injury time).

To make a fairly long story short, I squeamishly got it fixed.  I was cringing, whimpering like a little baby, and had my hands over my eyes like a child on a roller coaster.  But all in all, it wasn't too bad.  Worst part was probably the injection for the toe-number and the thought of what he was doing to my poor toenail (I have yet to lose a toenail to running, by the way).  The procedure took a whopping 15 minutes, didn't require stitches (which it did when I had it done in high school) and I didn't pass out afterwards (which I did in high school).

I had to take about 3 days off from running, soak my foot in salt water once a day and change the dressing on my toe.  So far the procedure seems to have worked.  After some runs, I am finding a little bit of blood on the bandage and there is only minimal pain -- even 10 days after the surgery.

I am just glad I have this monkey off my back.