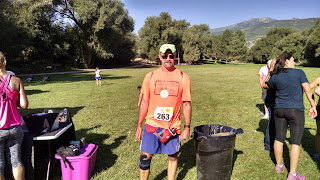 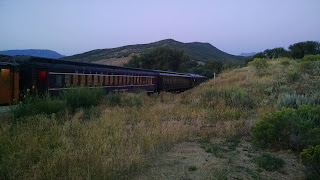 
Last year, I ran the inaugural and 2016 edition of the Dam Train Race.  It was a pretty fun race on a challenging course -- and it was cheap!  I think I paid around $25 for it and for a fully supported race, I was pleased with it.

So I made a mental note that if it came around in 2017, I would run it again.  Sometime this winter they sent me an offer I couldn't refuse (I think about $20) and I figured why not. 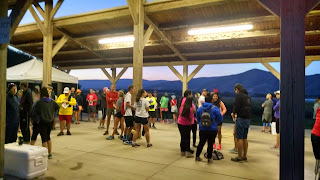 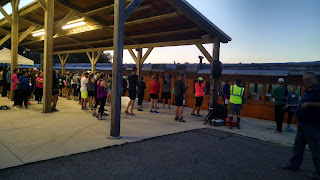 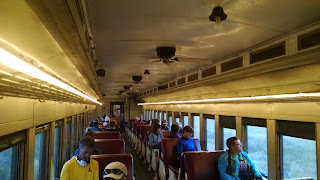 This race isn't terribly competitive.  As far as I could tell there were no age group awards (just awards for the overall winners) but the point is to beat the train.  You basically arrive early, grab your bib and board an aging, nostalgic train and take about a 30 minute train ride along the shores of the Deer Creek Reservoir.  From there, you are dumped off at the south end of the reservoir.  After a 15 - 20 minute discombobulation period, you get a head start and when the last runner crosses the 1/2 mile marker (where you cross from one side of the trail to the other) the train begins its return to the pickup location.

Last year, I believe I was one of the first finishers to lose to the train.  I definitely wanted revenge.

The problem is that I have been injured for the past several weeks and my running has been minimal.  So I didn't think I would have it to run well today. 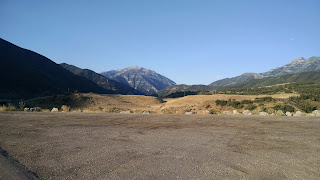 I was one of the first ones off the train and I had to use the restroom -- bad.  There was a line-up on the train and I figured I would have 20 minutes or so to kill before the start.  I knew that the bathrooms were in the parking lot of the south side of the trail.  I started making a casual walk and it was definitely a LOT longer than what I remembered it being last year.

I turned around and saw dozens of people doing a slow job in pursuit of me.  Uh oh... if I wanted to go, I was gonna have to run.  So I picked up the pace (much to my knee's discomfort) and was glad to see that I was third one there.  I quickly used the restroom and headed back.  On the way back, I saw literally a hundred people all heading towards the restrooms.  Unfortunately, there were just 4 of them, so I doubt all of them got a chance to use them before the race (unless they used the bushes).  I am so glad I took care of business right away.

I killed about 15 minutes at the start and dropped off my bag at the gear check.  Most of the people weren't at the start yet and I figured that would bode well:  with all the returning people, it would mean that the train would likely get a delayed start. 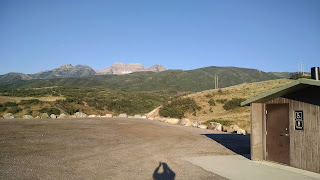 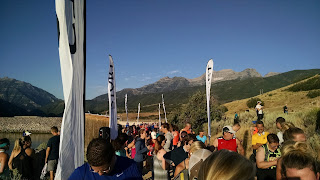 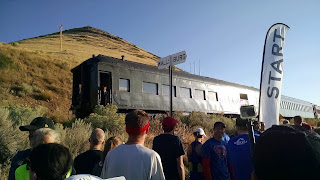 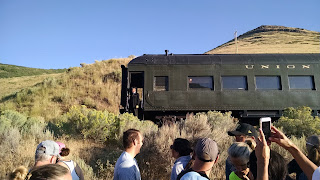 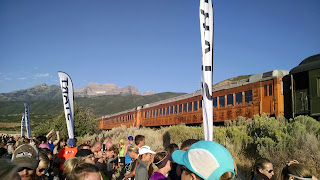 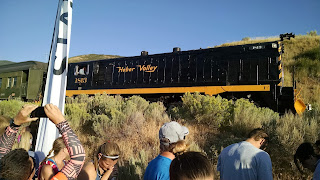 After a National Anthem, we started at 8:00 AM despite a lot of the people not being there (a few were in the bushes taking care of "business").

I started off conservatively on the path.  I wanted to see what my knee would do.  Despite its initial protestations it felt fine -- in fact, it held up nicely throughout the race.

While it was recommended faster runners started in the front, I found most really didn't heed that instruction.  It took a while to get to my desired pace.  I didn't mind too much but there is only about 6 feet wide of trail (often times with scrub running down the middle of it) so passing was challenging.

It was stated that the train generally head a 9:10 minute per mile pace.  That is a doable pace for me, but running at 5300 feet and on hilly terrain meant that it would be a 50-50 shot at me beating it.

The trail is mostly hard packed dirt with some gravel that will slowed me down -- it felt like running in sand sometimes.  However, it is not technical and I was never really worried about falling or having to slow down to navigate the terrain.  There were several switchbacks and long grinds up hills.  This race isn't for people expecting a fast time or "easy" race.

I was feeling pretty good until about mile 3.  The hills, while present, seemed unrelenting at this point.  My "7 mile-ish" runs haven't gone particularly well on account my endurance has dwindled.  But I hung in there and took the uphills easy (and luckily my knee was agreeable) and powered down the downhills.  Fortunately, I know the course and I knew what to expect so I could prepare myself accordingly. 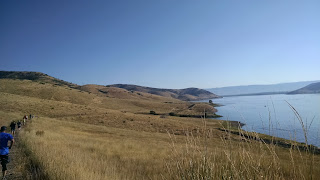 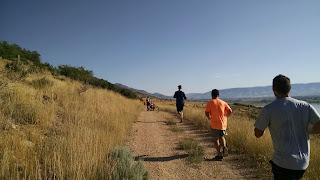 Around mile 4 or 5 I turned around and saw the train in the far distance.  I am not sure how much of a lead I had on it, but the knowledge that it was chasing me down (on the much easier / shorter route) made me stay strong.  I almost felt like I was running for my life.

I was counting on the fact that the last mile is primarily downhill.  I was definitely holding back and once I saw the edge of the north side of the reservoir, I turned on the jets.  I wound up passing a few people that I had been playing tag with through the race.  It felt good to finish strong rather than a dying gasp.

And I am happy to report that I beat the train by about 10 minutes.  Granted, the train took longer to get started and the course's start line was moved up about a quarter mile compared to last year's.  In fact, last year I ran 7.5 miles, this year, 7.28.  So not quite a 12 KM. 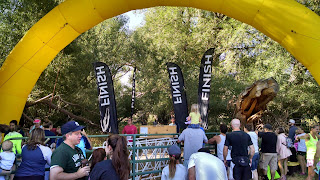 
I had carried my own hydration, so I didn't need the two water stops (they were only serving water from what I could tell).  I don't think the first one was quite set up, as I saw runners opening bottles of water and pouring themselves a cup.  The second one was ready for customers, but I was happy sipping on my Gatorade. 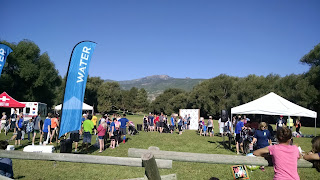 There seemed to be a lot more people this year.  I think the low price and positive vibe attracted a lot of people.  I heard rumors it was listed on Groupon as well.  While this led to a clogged initial start (and there seemed to be a bit of a bathroom issue) I was happy to see this event well attended and growing.

The finish line food was also better compared to last year's.  There were chips, granola bars and water.  I was hoping for a recovery drink (even Gatorade) but alas, just cold water. 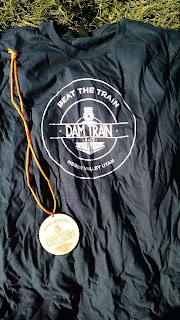 The finisher's award appears to be the same as last year.  It is a cork medal.  I liked the shirt, but it is a cotton one.  I'll probably wear it more than last year's hat.


I wound up socializing with a number of runners (and I think a few of the race's workers recognized me since I wrote favorably about the race last year).  After about 30 minutes I decided to hit the road and head home.

I love this course.  It is challenging and a good workout.  There are some many beautiful shots here.  I took less pictures this year on account I wanted to beat the train.

Course support was acceptable.  For $20, I got a cool train ride, a shirt, a finisher's award and refreshments afterwards.  Parking was a bit of an adventure, as one had to park about 1/2 mile away.  They had shuttles to the start but it looked like you were on your own to make it back -- so it was a long walk.  The bathroom situation wasn't totally thought out and I think a lot of people were delayed at the start.  I suppose one should use the train's restroom (I was taking it for granted that last year the race started near the parking lot where many bathrooms were located).

I would love to see age group awards on this one or even a special medal if you beat the train.  Either way, I was happy with my experience, especially given the very affordable price.  I would do this race again as well.
Posted by Eddie Gaul at 2:40 PM