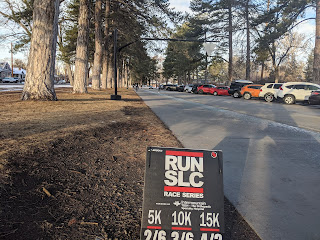 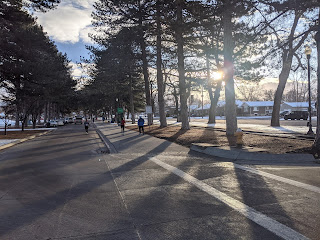 A few months ago a friend asked me to run the SLC 5K with them.  Being February is a pretty slim month as far as races go, I readily agreed.
My training of late has been focused on 5K / 10K efforts, so I had high hopes for this race.  It is put on by the local running store and they can be counted on to have a legit distance 5K as well as a super organized event (I wasn't disappointed here).  It was also my first time running this race.  Normally, it starts at the shoe store itself, but due to Covid-19 restrictions, they held the race at the historic Liberty Park a mile or two north of the store.
Also due to Covid-19 restrictions, the race was done with staggered start.  The lead back started at approximately 7:30 with me set to run at 7:40 AM.
I was one of the first to roll into the site and snagged a great parking spot.  I wound up doing a pretty quick warm-up and some drills and the time from 7 AM until I started went quickly (in fact too quickly). 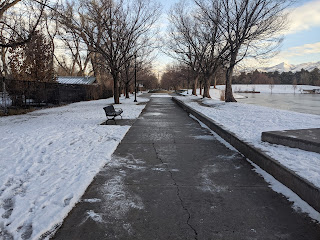 I lined up (socially distanced of course) with about 10 other people and we started off every 10 - 15 seconds.  We started off into the snow but they had a path cleared to the sidewalk, whereupon we were supposed to run 2 laps (and change) around the park.
During my warm-up, I had noticed that the sidewalk was pock marked with splotches of thin ice.  Some of it was worse than others, particularly under the tall trees that surround the park.  Only once or twice though I felt my foot slip and didn't see anyone take a spill, but still, the thought of slipping was in the back of my mind. 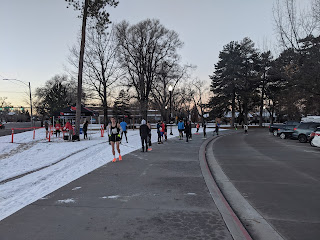 I started off pretty strong and I felt in control.  I kept reminding myself to save some wind for the second half of the race.  The first mile of a 5K is always the easiest -- except for the first quarter mile, as suddenly your heart rate spikes. But I didn't feel like I was running out of control.

I had a hard time running the tangents on the course since the closer you were to the road, the icier it got.  They had salted some of it, but it clearly hadn't taken effect yet.  My pace seemed sort of uneven as I accelerated in the dry spots and braked a bit when I saw wet / ice on the sidewalk. 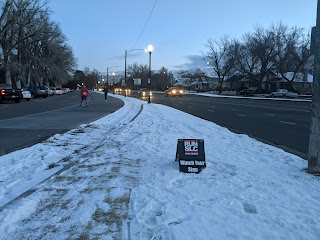 I think the course mile markers were slightly off.  I ran by the first mile marker in about 7:23.  My Garmin said I had run .97.  Either I was doing way better than I thought or my Garmin was rounding the corners too much.  I knew this course was going to be a legit 3.10 so I went with it....
Mile 2 things got more challenging.  It was a little tough to run by the starting line again and then another quarter mile down the stretch pass by the finish line.  Some of the super fast runners who had had a 10 minute head start on me were already finishing.  I was passing some of the later starters and working to keep up with those that had started with me.  I never felt hemmed in though and the staggered start -- even on a looped course -- was working. 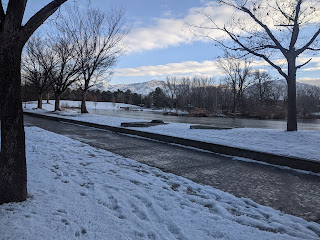 I didn't really pay too much attention to my Garmin nor my pace when I ran by the mile 2 marker (I do seem to recall my watch saying 1.97).  Normally, mile 2 is the roughest and I have a final kick in mile 3.  I was working hard but again, every time I felt like I was increasing my pace I felt like I had to brake to avoid 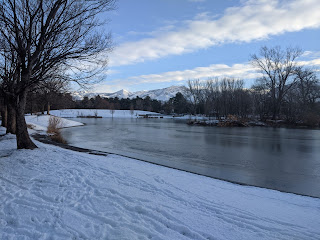 The final push was tricky.  Normally the last quarter mile I tend to give whatever I got left.  But on this race, the iciest part was the finish.  Also, you had to make a sharp left turn to cross under the inflatable arches.  They had salted down the turn but it was still slick looking.  Fortunately, after making the turn you had a very short sprint to the finish line. 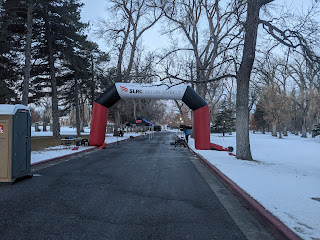 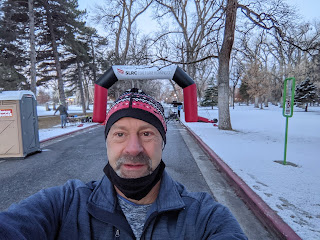 So I ran a 24:52.  I had hopes of 24:3x or 24:4x but I think with the weather and not really doing a more thorough warm-up held me back.  These days, anything under 25 minutes I am happy with.  The course was fast despite the footing with minimal elevation changes.
I thoroughly enjoyed an in-person race where I could work on picking off other racers (although it was humiliating to be passed by people in the first wave on their second loop).  I half expected the extra competition would spur me to greatness.
With it being 29 degrees, I still ran in shorts and a double shirt.  I also wore heavy duty ski gloves, which kept my hands warm (I hate cold hands).  I made the right choice.  For a while I was debating on wearing a jacket and I am glad I went with what I did. 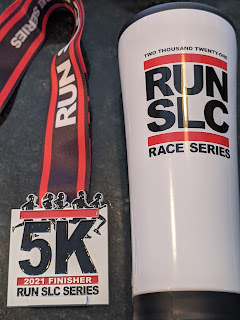 Post race snacks included beverages (water / Gatorade), bananas and granola bars.  I grabbed a quick banana.  I liked the medal and they gave you a free coffee mug as well.  No t-shirt on this one (you could buy one at packet pickup).
This is race #1 in a 3 part series.  They have a 10K and 15K as well.  I am already booked on the days of their other races but I wouldn't hesitate on doing this one again.  It was safe, well-organized and while the course was repetitious, it was a pretty day for a run.
Posted by Eddie Gaul at 12:15 PM