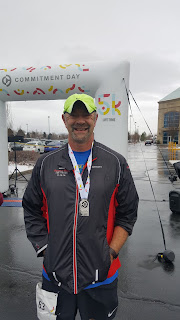 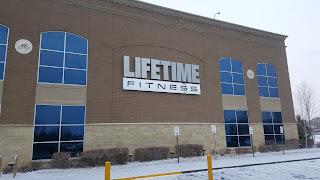 I don't do a lot of New Years Day races.  There just aren't that many of them here in Salt Lake.  However, two routinely pop up each year: an indoor run on an indoor track (yuck!) and the Lifetime Fitness Commitment Day 5K.

The Commitment Day 5K is kind of a fun run.  Yes, they record results but only the top 3 get prizes.  No t-shirt but a cool finisher's medal and it is run outdoors  -- regardless of the weather.

I saw some sort of special on Facebook, where I could run for $15.  Not a bad deal for a 5K.  So even if the weather was bad or something else came up, I wasn't out too much.  So I signed up. 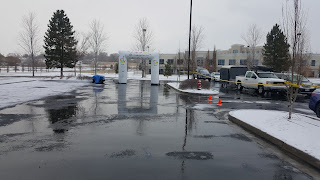 I rolled into the race site way early.  I had an errand to do on the east side of town and the roads were slippery and in some spots not terribly taken care of.  So I left with plenty of time.  I guess I got there WAY early, as I was one of the first to arrive at 8:45 AM for a 10 AM start.  Runners are one thing: punctual.

I had no idea what the race course was going to be like.  I've run several times in South Jordan and I figured we'd be on the bike trail for a bit and then drift off into a neighborhood.  Turns out, the race was held primarily (about 90%) on the Jordan River Bike Trail, of which I am very familiar with.

Fortunately, it was easy to kill time.  I knew a person or two at the race and people were generally easy to strike up a conversation with.  It also gave me time to check out the gym and its facilities.

Around 9:45, I did a warm-up.  Probably ran a mile and did some strides.  I had no idea what direction we were going to run in, but I figured we'd be heading south - where a solid 10 - 20 mile per hour head wind was coming from.

The race started promptly at 10 AM and I was out and running.  There were about a 100 runners so there was some initial congestion at the start, but within a few hundred yards, it was smooth sailing.

The parking lot was plowed (a few hundred yards) but we quickly made it to the bike trail where there was maybe half an inch to an inch of fresh snow.

The trail hadn't been used that much since the snowfall and footing was decent.  Spots were slippery and it was slow going when I had to round a corner, but overall, other than the wind it was smooth sailing.

I wasn't too surprised to see an 8:41 on the first mile.  The wind was just relentless and while I felt strong, I knew that I was paying a price.

I knew the course at this point, having run on it many times before: it is just a flat bike trail with the Jordan River next to it.  There is a lot of swampy / desert-like vegetation around and the scenery truly isn't that bad.

I was wondering how accurate the course was going to be and was beginning to worry that it was going to be long.  Fortunately, after rounding a corner there was the turn around point, at about 1.53 miles on my Garmin.  Finally some tailwind!

While I was in oxygen debt, the tailwind definitely lifted my spirits.  Occasionally I'd feel the wind blowing against my wind breaker (I went out with the clothing you see in my photos: shorts, t-shirt, windbreaker and gloves).

The course wasn't marked really well but again, I had been on there before and I definitely wasn't leading.  There were a few other runners in front of me, but no one behind me.

The final mile turned out to be my fastest but I definitely was hurting.  My endurance is pretty good at this point, so I was patient but I was really happy to see an 8:30 show up.  I've done very few negative splits before, particularly in a 5K.  I won't credit too much with proper pacing, but more of the a nice tailwind.

I crossed the finish line with a 26 and change.  Not what I wanted time-wise, but given the course conditions, it is what it is. 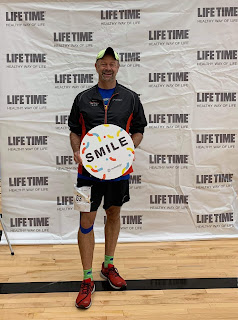 No t-shirt for the race, but they did have a nice medal. For $15, I wasn't expecting much but the medal was better than expected. 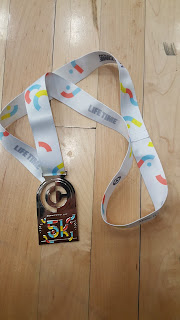 I swung by my car, grabbed some of my stuff and proceeded back in the gym.  With no age group awards and clearly I wasn't in the top 3, I was tempted to head out.  But they had a drawing and by the time I made it into the gym, I had about 20 minutes to wait until the drawing did happen.

Unfortunately, lucky wasn't on my side and I didn't win but they had some nice prizes. 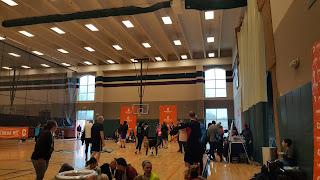 On the plus side, they had a super healthy breakfast consisting of power pancakes, blueberries, oatmeal, and bananas.  Food was actually REALLY good and no junk too.  Color me impressed.

Overall, I liked this race.  I'd consider it more of a speed work out with a medal at the end and part social event.  I'd do it again if I didn't have anything planned for New Years.  It was a good time and I enjoyed myself, and at a price of $15 -- it is hard to beat. 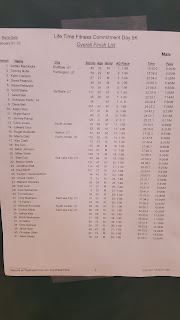