On Saturday May 18th, I ran the Ogden Marathon in Ogden Utah.  This was my 9th marathon and I've been training for it since February, if not earlier.

During the week, I had felt some sort of a twinge in my posterior tibial tendon.  I have had tendontitis with this before and was sort of worried that it would be a factor.  I am glad it wasn't and in fact I didn't feel any problems with it but it had been in the back of my mind for most of the week.

I left Friday night right after work and headed up to Ogden.  For my friends in the midwest, traveling through Salt Lake City on a Friday night isn't that bad... and I made the trip in less than an hour, despite going through a major city during rush hour (it would like going from Skokie to Joliet on a Friday night -- good luck on doing that).

The weather had been threatening rain for the past two days and when I got up there it was overcast and windy.  Parking at the expo was kind of crazy, but I managed to find a decent spot.  The expo was at the Union Station -- a museum for guns and trains.  Most of the exhibitors were inside but despite the inclimate and threatening weather, there were some activities outside as well.  I figured this was going to be a semi-small marathon, but I was impressed with the number of vendors.

After picking up my shirt and goody bag, I headed on over to IHOP.  It wasn't very busy and I knew what I was getting.  I toyed with going to Golden Corral but I knew I'd over eat and for a runner, there is nothing better than carbo loading on pancakes.  I wish I had done a bit more research into what to eat for dinner because Ogden does sport a nice downtown area with some unique eateries that would've been worth visiting.

I stayed at the Comfort Suites and despite the hotel being a good distance from the race start the place was filled with runners.  The room was pretty nice -- it wasn't cheap either, having paid close to $100 for it.  Desk area, two queen beds, nice bathroom -- it was quiet and comfortable.  They did have a free shuttle to the race, but not one on the way back.  I toyed with the idea of taking it and bumming a ride with someone on the way back (I was solo) but I decided to drive myself to the race start rather than bothering a total stranger at the race.

I hit the hay at 9:15 or so and slept half way decently until about midnight where I tossed and turned for about 75 minutes.  I had 3 alarms set to go off at 3:45 which woke me up out of a dead sleep.

When I woke up I looked outside and saw that it was raining -- from the looks of it hard.  I thought about bailing on the race, but after all the training, money and effort, I figured heck... I can bail out if it is really bad...

I ate cereal, drank some Powerade and assembled my gear and left the hotel at 4:20.  It was about 5 minutes to the race site and already people were filling up the parking lots.  The rain was a slow spitting drizzle and it wasn't really that bad.  Luckily I had bought some 33 gallon garbage bags and made an impromptu poncho out of one.  I gave some more to people in the parking lot and after a 5 minute walk boarded a nice tour bus.  They wanted you on the busses by 5AM and I was there in plenty of time.

It was about a 45 minute bus ride to the top of the canyon (elevation 5500 feet).  I wish we could've sat on the bus until the race start (7:15) but after a long, windy drive they dumped us unceremoniously off at a cow pasture (minus the cows).  It was like some refuge camp where everyone was huddled around smokey bonfires.  The rain was intermittent but mostly a dull spit / drizzle.  I found a place close to a bonfire, sat down with the 2500 other runners and made friends. You can look at the field here,

My poncho was working great and while it was chilly (probably low 40's) I was comfortable and warm.  The field was muddy, but not sloppy and there were some left over cow patties so I sat on my gear bag.  The bonfires were smokey, so it was like smoking a pack of cigarettes before the race started.  My clothes and sinuses smelled of hickory smoke for the rest of the day.

I wish I had brought my collection of garbage bags up there.  There were a lot of hapless souls that I could've helped out....

After 90 minutes of sitting around, the race started promptly at 7;15.  At this point, the rain picked up.  I put a sweatshirt in my gear bag and decided to go with: shorts, shoes, a t-shirt, a wind breaker, my garbage bag poncho, a winter hat, and two sets of gloves (a cheap throw away pair and some good ones over it).  I am glad I went with the double gloves -- my hands were largely warm the entire race.  My race bib was attached to my shirt, so anytime I went through a camera area I had to lift up my jacket & poncho to expose my bib so they could get my number.  Hopefully they got some pictures of me.

The first 3 - 4 miles of the race were absolutely gorgeous.  You are running by state parks with a rambling stream next to you.  Lots of trees and lush green foliage.  It was also largely downhill on a service road.  I started out at an 8:45 pace that started to dip into the 8:30's thanks to the fast downhill start.

After 4 miles you head out into farm land.  There are some rolling hills here that seemed mostly up rather than down.  Attentive readers will recall that I ran a 30K race a few weeks out here so this wasn't new territory for me.  In fact, I was kind of bored with it and I felt like it was work at this point of the race.  Despite slowing down a little, I felt I would make it up once I hit the top of the canyon.

I felt comfortable even though I could feel like my pace was starting to suffer.  For some reason my forearms were burning and I was fighting a growing cramp in my shoulder.  I think I was super tense because of the weather -- wondering if I was going to go into shock from the cold / wetness.  I also think I am going to have to find another hydration system other than my camelbak.  I love how much water it holds, but I don't think it allows me to run naturally and I think that was largely the reason why I was hurting.

By the half way point, my shoes were soaked and my running shorts felt like a wet bathing suit.  I looked longingly at the busses for the relay teams and thought about bailing on the race -- but I wanted my medal and I didn't want to have a DNF.  Once you quit once, it gets easier to quit in subsequent races and I didn't want to set up a pattern.  I kept telling myself at least it wasn't hot.  Unfortunately, by mile 10 my pace had really suffered and people were passing me.  At about mile 15 or so, the 4:00 group passed me, along with my dreams of a sub 4:00 marathon.

I reached the top of the canyon and here is where the downhills really started.  There were a few portions that were fast downhills, and it wasn't painful, even for someone who's legs were shot.  I had hoped to pick up my pace to the low 9's again but my legs and spirit weren't responding.  For some reason, I couldn't get my gear and at this point I was just trying to finish.  I felt hydrated and I was eating gels regularly... I guess it just wasn't my day.

The canyon section of the race were the best views of the course with towering canyon walls and even a waterfall. You can trace the area on google maps by going here.

After doing about 8 miles the course dumped you off onto the Ogden bike trail.  I expected this to be a dull section of the run, but I was mistaken.  There was actually some decent crowd support here and the twists and turns of the tree lined trail made it fun.

I was getting passed left and right at this point, and I was just in survival mode.  While I wasn't passing many runners, I was passing walkers.  I am guessing my pace was down into the low 11's or upper 10's.  I just didn't have it today and whether I had gunned through the first few miles too fast, the weather, or I was just undertrained, I am not sure.  Either way, I was frustrated but counting down every quarter mile made kept me going.

When I finished the race it looked like they had an awesome spread of food and drink.  Unfortunately, I didn't want any part of it.  I was tired, wet, buzzing on caffeine and sore. I kept moving and this was one of the few races where I didn't feel nauseated.  I pounded a coca cola (wonderful!) grabbed another for the road and made the half mile walk back to my car.  It was still raining and with teeth chattering I managed to find where I had parked.

I took a super long hot shower and hit up the Layton Golden Corral for my usual celebratory meal.  I sucked down at least 5 Arnold Palmers and ate a decent buffet.

Overall, I am disappointed with my time.  This course had a nice downhill profile (1500) and I was hoping to crack 4 hours.  I felt like I was trained well enough to achieve this.  I think some of my negative thinking got the best of me in the early miles and worrying about the rain and cold sapped my energy.

Today I have the usual soreness but I've certainly felt worse post marathon.  I had some twinges in my achilles in the last mile but nothing to show for it today.  My right knee is a little tender, but overall I am in good shape.  I have some serious chaffing on my nipples (as expected -- imagine 4 hours of a wet technical shirt rubbing against them) and some redness under my arms (probably from the CamelBak straps).

The race was well run with some excellent food / water stops.  I'd definitely recommend this race for those looking for a beautiful, well organized marathon.  The 90 minute wait before the race wasn't very good and if it had been a torrential rainfall it would've been an absolutely miserable experience.  Hopefully they address that.

You can see my splits and tracking here:  https://www.runraceresults.com/Secure/RaceResults.cfm?ID=RCQW2013 (bib #12874).  Also Zazoosh.com should have pictures posted of me (you can see me running with my garbage bag poncho).

Here are some of the photos I took: 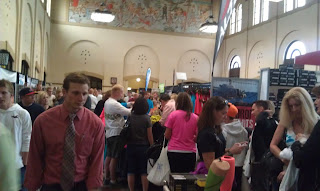 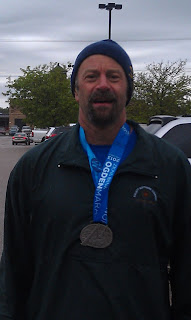 Me: exhausted, wet and cold after the race 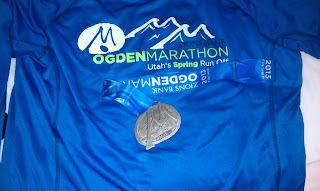 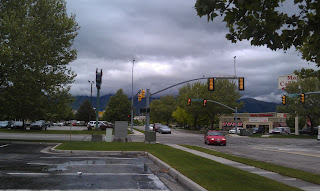 Notice the clouds over the mountains.  Yup, that's where I ran 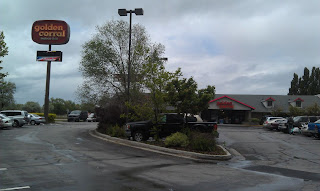