This past weekend (5/4/2013), I ran the Dino Half Marathon out in Vernal, Utah.  I have been itching to go out to Vernal for a while, having heard that the area was absolutely stunning.  Having a half marathon to run made the trip worthwhile.

From Cottonwood Heights, the trip takes just under 3 hours and runs about 175 miles.  The road there is mostly 2-lane highway with the obligatory passing lane thrown in.  Traffic wasn't that and you pass through 4 sizeable towns: Heber, Dueschne, Roosevelt and of course Vernal.  The route there was stunning -- to say the least and I will dedicate a post specifically for that.

I stayed at the Holiday Inn Express in Vernal -- great hotel -- a little pricey but worthwhile.  I had dinner at the Wingers Bar and Grill (sort of like Hooters without the scantily clad waitresses).  I was unsuccessful in locating the local Italian restaurant and decided to keep things simple.  I had rice, Mahi Mahi, steamed vegetables and plenty of complimentary popcorn. 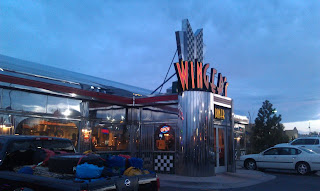 The race started at 7:30 but I had to be at the Maesar Elementary School by 6AM.  So I was up at 4:45AM eating Life cereal by the handful and sucking down Gatorade.  I had no problems getting to the race site (thanks Google maps) and even led a fellow runner there.

I boarded a really nice bus and soon enough I was driven to the race start -- some 13 miles up a canyon.  We were dumped off at about 6:30 and had to sit and relax for an hour in a campground area.  Unfortunately, for the 300 or so runners at the race, they only had 3 porta-potties.

It was chilly up there -- and I mean up there -- starting elevation was at 7000 feet. I am guessing the temperature was in the upper 30's. Luckily I had worn sweats and a sweatshirt so I was comfortable but several of the others hadn't thought that far ahead and there were many shivering runners.  I made some friends as we exchanged stories about other races we had done.  The talk of the town though was the cool medals we'd receive if / when we finished.

Normally I have problems with elevation but today I didn't have any problems whatsoever.  No light headedness or ringing in my ears.  I felt a little sluggish, but I attributed that to the cold.

The race started exactly at 7:30 and we took off.  I put my sweats in the gear drop and ran with one glove (I lost one), shorts, and a technical t-shirt.  I had been debating on whether to run with the sweats, but I am glad I didn't... by mile 2 I was sweating and we had gotten into the sun.

The first 3 miles or so is all downhill - and fast.  I was hoping to run 8 minute miles, but with the fast decline I was nailing 7:30s and feeling very comfortable doing so.  If you look at maps.google.com and look for N. Dry Fork Road, Vernal Utah, you can see some of the pictures of the surrounding canyons... just awesome red rock canyons surrounded by lush vegetation.

I was doing pretty well and I figured I was in the top 25 or so.  I wanted to run a little slower, but it was almost impossible to avoid being pulled down the road.

There is a small climb around mile 4 or so that looked like worse than it was but I was well on pace to having a really good race.  The first 8 miles are down hill but I noticed the sections of downhill were getting less and less and my pace was normalizing back to an 8:00 min / mile.  Then mile 9 through 10 was moderately uphill -- nothing serious but I felt it.

After mile 10, my pace took a huge hit.  I was in the flats and the scenery had changed from towering canyon walls to residential farm community.  I was probably running 8:30's - 8:45's and my once speedy legs felt rubbery.  This was a common complaint after the race -- that people's quads had been beaten up so badly with the 1500 elevation drop in the first 9 miles that it was hard to get rolling again.

I finished in 1:43:20, 5th in my age group, about 22nd overall. I would've finished 4th but this was a chip timed event and the final burst that I used to keep my lead off two guys that had dogged me the last mile wasn't enough of a cushion (I think I lost 4th place by 2 seconds).  That is the downside to chip timed events -- if someone starts behind you, you have no idea how much of a lead you need.  Not that it matters much -- just an ego thing.

Overall, I felt pretty good about the race.  I would've liked to have run faster, but coming off of a 30K from last week, I liked what I did.  It is also a nearly 7 minute improvement over my Summerlin race.  So now I begin my taper for the Ogden Marathon.

The post race festivities were pretty good -- your typical water, Gatorade, chocolate milk and some fruit.  For $50 I got my money's worth on the event -- the shirt was nice and the medal of a Stegosaurus was certainly worth the trip.  I chatted with some people afterwards and went back to the hotel after I realized I was out of an age group award (I probably would've won something if they had 5-year increments instead of 10).

I did hit up Golden Corral afterwards (yes they have one in tiny Vernal).  It is an older one but the food was still decent.  I didn't do the damage I normally do there -- for some reason my appetite was supressed...

The next day I was somewhat sore from my run, mostly in my quadriceps.  Also, my biceps were sore -- I think the last few miles I really was using my arms to try and push myself forward.  My achilles was  alittle sore post-race, but I seem to be no worse for wear. 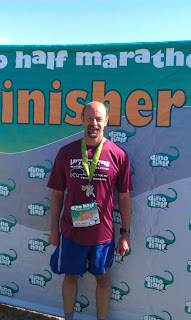 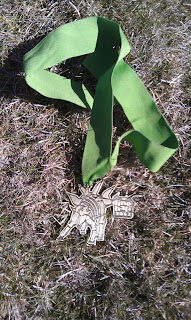 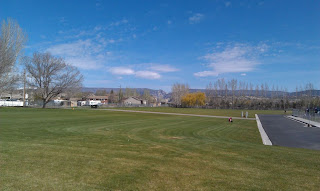 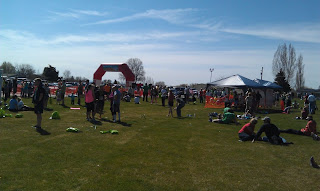 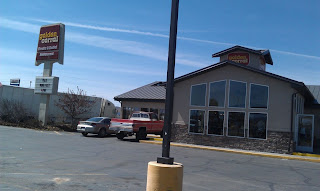 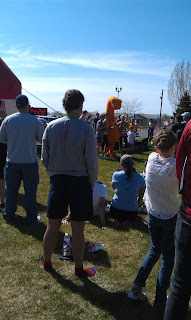